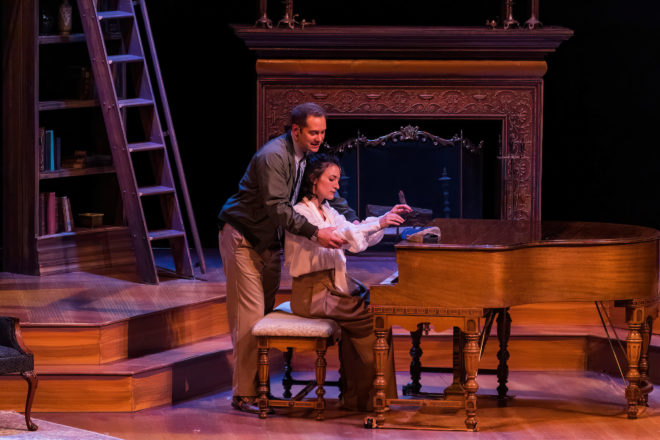 (From left) David Corlew as Marcus Moscowitz and Kirsten Salpini as The Suspects. Photo by Len Villano.

When a surprise party goes terribly wrong in the musical whodunit Murder for Two, 10 party guests become suspects – and actress Kirsten Salpini plays all of them.

Without missing a beat (or taking a moment to breathe, it seems), Salpini shifts from portraying a plucky schoolboy to an overfamiliar German doctor to a French femme fatale, all without any costume changes other than a pair of bright-red glasses that she puts on and takes off. She acts alongside just one other performer, David Corlew, who plays the wannabe detective who’s investigating the murder.

It’s a dizzying feat to watch, and an exhausting one to perform, Salpini said. And if acting for 12 (10 suspects plus two side characters) weren’t enough of a challenge, she also sings, does ballet and plays piano during the play. As a classically trained pianist and longtime dancer, she said Murder for Two is the “perfect intersection” of many of her skills, as well as a satisfying opportunity to put all those skills together.

That’s why Salpini has chosen to play the role – credited as The Suspects – twice. Her first time was for Lyric Stage Company of Boston in 2016.

Though she’s excited to play the part again, she said it’s still a challenge. The most difficult scene is when she acts as both halves of an arguing married couple as they angrily sing and play the piano.

“Nothing has challenged me like this role,” she said.

Still, you wouldn’t be able to tell from watching her. Using only her posture, voice and facial expressions, Salpini sells 12 characters with apparent ease, making it easy to forget you’re watching just one woman.

To achieve this effect, she has a technique: “I treat every character like a destination,” she said, by picturing what each one looks like in her head before shifting into the next role.

Salpini’s wealth of skills makes the role less challenging, but she said the trust she has in her co-star, David Corlew, is invaluable, too.

“It’s almost easier” having such a small cast, she said, because there aren’t 30 other people relying on her to nail her cues. With just each other to lean on throughout the 90-minute play, Corlew and Salpini can add creative touches to the script and have fun with their characters in ways they couldn’t if they were part of a larger cast.

The two actors’ bond off-stage makes the experience on-stage “feel like a ride we’re both on,” according to Salpini.