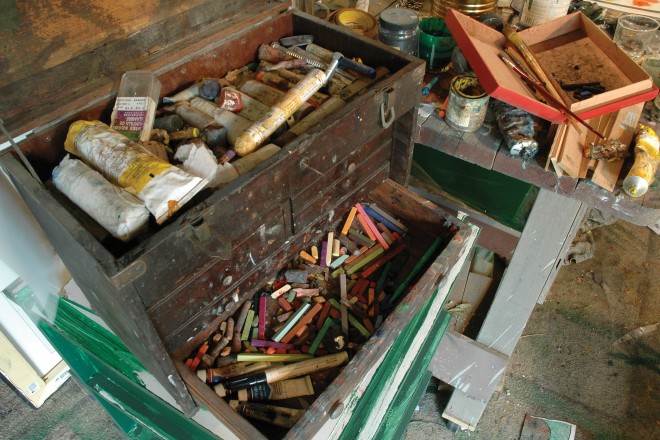 David Nielsen will tell you that he believes creating art is a process of evolution, something that is ongoing and ever changing. Even after a work of art is created, it continues to evolve as its interpretations change. The creation and viewing of the work is a communication first between the art and the artist, then between the art and its viewer. In this ongoing conversation, meaning continues to shift, new perspectives are formed, and the art considered becomes part of life. Nielsen believes that removed from this process, when the subject is reduced to merely what the eye meets on the canvas, something is lost. What is lost is the emotive force within the work itself. Viewing art in this way takes time; it is not passive, the viewer must bring something to the exchange. This is the implicit challenge.

Nielsen’s most recent work illustrates his way of seeing and interpreting shifting meanings. His paintings are styled like layered time-lapse images where figures move about the canvas. In some, the sun or moon measures a path across the sky. The passage of time is delineated in a seeming series of overlapping frames. In considering these works, the viewer slowly becomes aware of a sense of animation. Particular moments of the study come forward to the eye and then recede. The eye refocuses on the next piece of the sequence and a new moment is revealed. In this way the movement of a couple of hours is condensed into a single scene. Most of these scenes are alive and evolving from Nielsen’s own memories; an afternoon at a beach or night at a campfire are slices of time depicted as whole.

In executing these pieces, Nielsen depicts fractured figures in abstracted forms familiar to the tradition of Cubism. The difference is that rather than trying to show all the way around the subject, here we are being shown different pieces of the frame. Color is also employed to dictate spatial relationships and to lead the eye through the painting. Nielsen explains that in using elements of various styles, he can define space and indicate where things belong together, and where they don’t, within a composition. Here is the guide through the overlapping images: the map for the viewer.

Years of study and experimentation have led Nielsen to his current technique. He studied at the Milwaukee Institute of Art and Design where he earned his BFA in drawing. He later spent a year at the Institute for Foreign Cultural Studies in Hamburg, Germany in a non-degree program. In his last year as a student, he apprenticed with Mia Lin in New York. In 2002 he interned at the Peninsula Art School in the Emerging Artist Program, where he exhibited “Seasons,” a collection of eight diptych paintings.

It was in Germany that Nielsen became transfixed by the novels of Samuel Beckett. Before long he found himself sketching and then watercoloring over the text on the pages of the books as he read them. He eventually filled all the pages of his copy of How It Is with expressionistic and abstract figures and scenes. This exercise led him to re-create the pages in much larger format, superimposing charcoal drawings and watercolors over selected, disembodied samples of text, screened onto paper. The result of the work was a series ultimately intended to re-create each of the 147 painted pages of his original copy of the book. Beckett’s novel is in the form of a monologue delivered by a narrator crawling through mud. In Nielsen’s interpretation, he positioned himself as a filter of the text, representing the fitful and repetitive prose in austere, sometimes shocking depictions of its existential desperation. Selections of this series were exhibited at Mr. Helsinki’s Restaurant in Fish Creek in 2003 and 2004.

At this time Nielsen was also making a foray into the Los Angeles art scene. While living in Los Angeles and producing work there, he exhibited in several group shows in galleries throughout the city. His painting “New Now Know How (Olympia 2003)” was featured in Los Angeles Design House, 2003, and was shown in Los Angeles Magazine that October.

Nielsen had been a summer resident of Door County for many years, and like for many others, it continued to beckon to him. Nielsen finally returned full time in 2004. Presented with the challenge of a smaller art community and a smaller audience than New York or L.A., Nielsen has worked to make a place for himself and his work here. His efforts to promote and create a venue for his own work have led him to promoting and acting as curator of shows for other artists emerging in the area. Through the 2006 season, Nielsen is producing a series of rotating exhibits at Mr. Helsinki’s.

One of Nielsen’s influences, the 20th century British painter Francis Bacon, said that a canvas should look as though life passed through it, not on it. In his work, he strives toward this goal. His paintings first command the viewer’s attention, but then start a dialogue. In his most recent artist statement Nielsen writes, “…I still believe our experiences on this planet, even when they happen as a group, are singular. All people come to art differently, and I feel their emotions are their own. Ideally, art sparks conversation, and tells us to feel and share those ideas with those around us.” By making art that draws us into dialogue with it and with each other, Nielsen realizes his goal of life passing through his work, and its meaning is free to evolve for each viewer.

A collection of David Nielsen’s most recent work will be on display at Mr. Helsinki in Fish Creek beginning July 13th, with an opening reception on July 20th. The exhibit will feature 20 new canvases in oils and acrylics. A series of small format prints, drawings, and watercolors are also on display at Blue Horse Bistro through the summer.