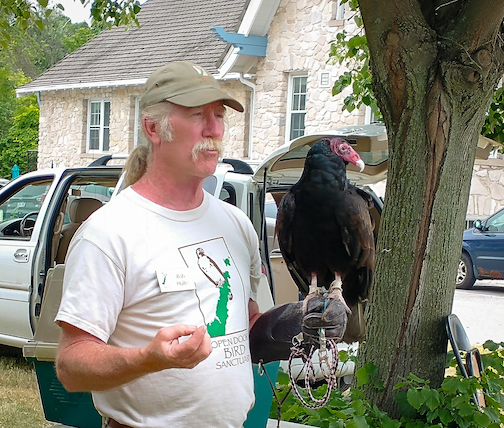 Rob Hults handles Amber the turkey vulture, one of ODBS’s most intelligent birds, during a meet-and-greet. She often looks through a peephole in her aviary. Photo by Jessica Gatzow.

Those who founded and operate Open Door Bird Sanctuary (ODBS) have been flying under the radar for some time, but now they’re welcoming eager visitors almost daily who want to learn about their resident raptors, such as Ginger, Amber and Twig. With a group of passionate volunteers on hand, ODBS has spread its wings this summer, offering a full schedule of educational tours.

Ginger is an American kestrel: a type of falcon. She’s always content to hang out on a handler’s falconry glove when visitors come through on a tour. Amber is one of the sanctuary’s most intelligent birds, and as a turkey vulture with a long life expectancy, she could outlive her caretakers. Twig the screech owl – the smallest resident – can be difficult to find because screech owls can camouflage themselves masterfully in front of a tree.

These are just three of the 18 residents at ODBS. Two new arrivals have been successfully acclimating during the past five months: Buddy, a red-tailed hawk; and Wisdom, a great horned owl. Buddy already participates in education programs, and Wisdom has made great strides in transitioning from his former home in a small cage. He hadn’t used his talons for gripping before, and hadn’t walked on stones and pebbles, but after gradually moving from low logs to high perches, he’s gained comfort in exploring his new, spacious aviary.

Fisher arrived at ODBS in 2019 as the sanctuary’s first eagle, and now a golden eagle companion named Mesa resides in the aviary next to him. Golden eagles are North America’s largest predatory bird, and Mesa comes from Utah.

Long-term-care facilities such as ODBS aren’t plentiful, so it’s common to receive a bird that’s not native to Wisconsin. Every raptor is transferred from a rehabilitation center – a process that involves lots of permits and paperwork facilitated by the U.S. Fish and Wildlife Service (USFWS).

Wildlife sanctuaries serve as educational facilities as much as they provide forever homes for injured animals. USFWS requires that every sanctuary bird participate in 12 educational programs or be on public display for 400 hours per year. This can occur in public places such as schools and parks, or in on-site exhibitions at the sanctuary. ODBS is unusual in that it’s strictly an educational facility; most sanctuaries are connected to a rehabilitation center or cannot offer exhibition space.

“We want to have a really good variety of birds here,” said Executive Director Rob Hults. “If we wanted to, and we built 10 aviaries, we could be Open Door Great Horned Owl Sanctuary, but that wouldn’t have a whole lot of educational value.”

Meeting those education requirements has hardly been a challenge for ODBS this year because interested visitors have filled open hours on Saturdays, 11 am – 4 pm, as well as pop-up meet-and-greets throughout Door County. Private sanctuary tours have been filling up quickly as well. On Saturdays, there’s a constant rotation of educational programming in various areas, featuring a different bird every 30 minutes.

With his pointed ear tufts and calm perch, Forest – a long-eared owl – doesn’t appear injured, but a dislocated wing prevents him from flying. The goal for any injured bird is always rehabilitation, but it’s not always possible. When an animal cannot recover enough to survive on its own after spending time at a wildlife rehabilitation center, a sanctuary is typically its only option for survival. Every bird at ODBS has an injury that prevents it from surviving on its own, including common conditions such as vision problems and wing injuries, frequently caused by car strikes.

Most residents get their own private mew (a type of aviary for housing birds of prey) at ODBS, but red-tailed hawks Bonnie and Clyde arrived at the sanctuary as a bonded pair. They aren’t mates, but they are still protective of one another. Great horned owls Gracie and Blackbeard have a similar situation, and their aviary’s structure further demonstrates how each bird’s home requires personalized consideration: Hults designed special ramps to help the pair of one-eyed owls ascend to their perches.

In her mew between the two bonded pairs, Radar the barred owl observes carefully as a volunteer cleans her home and refills her water tray. Behind the scenes of the tour in which bird residents perch on handlers’ gloves, volunteers busily move from one mew to another.

Each “raptor team” member is typically a jack-of-all-trades. They begin by learning to clean feathers and pellets out of the mews, wash the mats, change the water and prepare food. ODBS feeds each bird a varied diet of mice, rats and quail, and the eagles sometimes receive donated venison when the DNR finds a deer hit by a car.

“It’s an absolutely incredible experience seeing birds up close and knowing the impact you have on them,” said volunteer Bill Bauernfeind. “That feeling never goes away.”

Bauernfeind has volunteered at ODBS for more than two years. Initially, he never imagined he’d handle the birds, but now he works with a variety of raptors during educational programs. Like most volunteers, he had zero experience with raptor care before Hults welcomed him to ODBS.

“I was a teacher for 35 years, and I have learned so much from Rob,” Bauernfeind said. “He’s like a bird whisperer. It’s really interesting to be able to pass [education] on to other people.”

After as little as a few weeks of cleaning and feeding, raptor team members can begin learning to handle birds, usually starting with smaller residents such as kestrels. Each bird has a set of anklets with strings called jesses attached, which connect to a lead. A handler must learn how to tie a falconry knot to anchor everything to the handling glove.

The 4,000-plus hours per year that ODBS volunteers contribute is the equivalent of two full-time staff members.

“If it weren’t for volunteers, we wouldn’t exist,” Hults said.

Sanctuary birds illustrate an interesting juxtaposition of domestication and natural behavior expectations. Raptors respond to subtle body language and notice patterns in humans, so handling them requires the same consistency as training a pet at home. And their comfort levels vary: Some like large crowds, but others remain inside their mew as an exhibition-only bird.

“They’re not bonded to us, but they trust us to care for them and keep them safe,” Hults said. “They haven’t been domesticated over generations – they’re truly wild animals.”

Educational programming helps to clarify misconceptions and answer questions about wild-animal behavior. For example, Aisling often flaps around and hoots when a handler begins to return him from a tour group to his mew. He might appear panicked or distressed, but really, this Eurasian eagle owl is just excited to be around people and doesn’t want to go back inside his aviary.

“When I was in Ireland, we used old Irish language words as names for our Eurasian eagle owls,” Hults said. “In the old Irish language, ‘aisling’ means ‘dream.’ As the first bird here at the sanctuary, he was the beginning of our dream.”