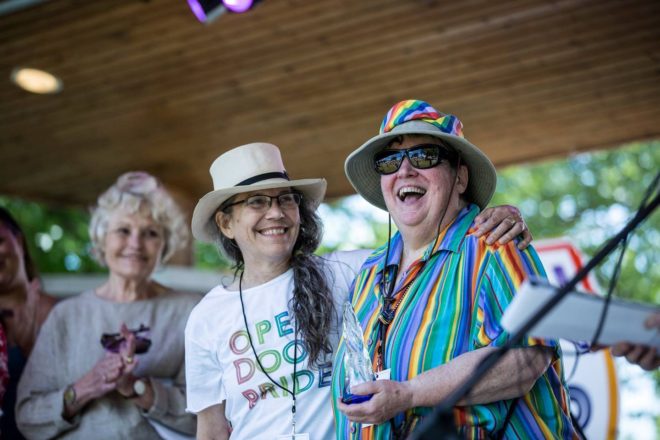 During Open Door Pride 2018, Alder Barbara Allman and Cathy Grier present Sandy Brown with the inaugural award that has become her namesake. Photo by Ty Helbach.

The fifth Open Door Pride Festival will be held virtually – for the most part – on Saturday, June 26, but festival founder and chair Cathy Grier expects that some people will gather at Martin Park in Sturgeon Bay for a smaller celebration.

“We’re not encouraging crowds, but people are going to come,” she said, “and I’d love to see kids and families in the park.”

Representing an organization that’s dedicated to inclusivity, Grier wanted the celebration to be as welcoming – yet as safe – as possible, so Open Door Pride made the decision in January to go virtual.

The gathering in Martin Park will begin with a ceremony at 12 pm, when Alder Spencer Gustafson will read the City of Sturgeon Bay’s proclamation that June is Open Door Pride Month, followed by the presentation of Open Door Pride’s Sandy Brown Award to this year’s recipient, Write On, Door County.

The award was named for its first recipient, Sandy Brown, who started the Door County Chapter of PFLAG (Parents, Friends and Families of Lesbians and Gays) in the 1990s. Each year, a different artist designs the physical award, and this year, glass artist Stephanie Trenchard created it.

Attendees at Martin Park are also encouraged to interact with two installations: the Ribbon Project and What’s My Pride?

The events at the park will be livestreamed, and the virtual version will feature exclusive content: music videos from BETTY, a pop-music trio and activist group; content from Celeste Lecesne, creator of the Trevor Project and the Future Perfect Project; videos by Door County artists; and musical performances by Grier, the Troublemakers and others.

Open Door Pride is a small but growing organization. For people who are hesitant to attend a Pride festival, Grier is happy to make the videos available after the festival for people to watch anytime.

“People that wouldn’t normally go to a Pride festival will see that we’re really having a good time,” Grier said.