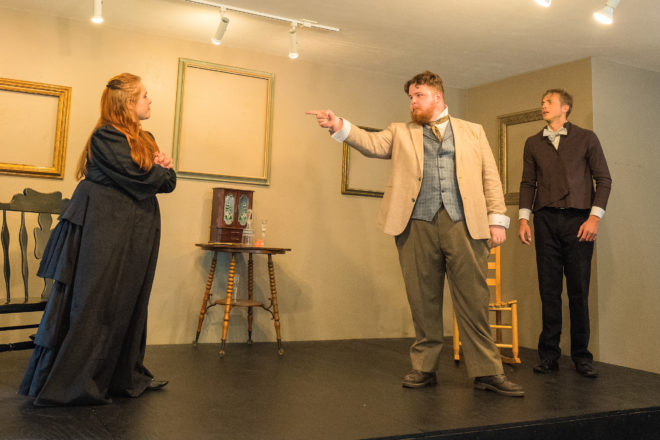 A group of recent Augsburg College grads is transforming their talents and passion for directing, playwriting and performing into the peninsula’s newest theater offering: Open Door Theater Company.

Born of the “whimsical ramblings” of then-undergraduates (and now husband and wife) Victoria Linstrom and Andrew James, the company has quickly transformed from a faraway dream born in Minneapolis to one preparing for its first production at Crescent Studios in Fish Creek this weekend.

The name of the theater pays homage to the peninsula it now calls home. Upon entering senior year of college and preparing for their upcoming nuptials, Linstrom and James began exploring how and where to make their theater dream a reality. Linstrom, a lifelong Door County visitor, knew of the county’s artistic and theatrical environment, and when they committed to moving here last summer, they also committed themselves to establishing Open Door Theater Company.

“We were looking at two pathways,” James said. “We could jump right in and do the work and follow up on our networking connections in Minneapolis and slowly forge our way out there doing work for other companies and that kind of stuff, or we could come here and try to just do it ourselves, try to do the kind of work we want to do right away. So instead of, ‘Let’s work for other companies and then maybe start a company down the line,’ we were like, let’s do it now while we’re young and have the flexibility to just try it and see how it goes.”

With the help of fellow theater students Brid Henry and Mitch Ross, the group set about creating a theater built on honest performing and audience connection set in intimate venues. Their first production, If the Shoe Fits, was a comedy based on embellished true stories of James’ time working at a Mall of America shoe store – “all sorts of awkward, awful customer interactions,” James explained. The foursome put the play on as a fundraiser in Minneapolis prior to packing up and heading to Door County.

That first production inspired the direction of Open Door’s first show of their inaugural season here, an adaptation of Anton Chekhov’s one-act comedy The Bear, which will also introduce Door County audiences to the group’s humorous leanings.

“Touching on the philosophy of comedy, it’s a great way to engage with the audience because while we laugh our guard is down and it’s kind of beautiful that we all can share that moment together,” Ross said. “The Bear is going to be a lot of that.”

It will also showcase the troupe’s dedication to making the most of the three-month high season in Door County.

“We put on If the Shoe Fits in the matter of three rehearsals so it was a really fast turnaround with the process and that’s kind of how we’re going about this season too,” Henry said. “We’re just getting things done really quickly and really efficiently and then we’re going to do a weekend at the end of each month for our performances.” 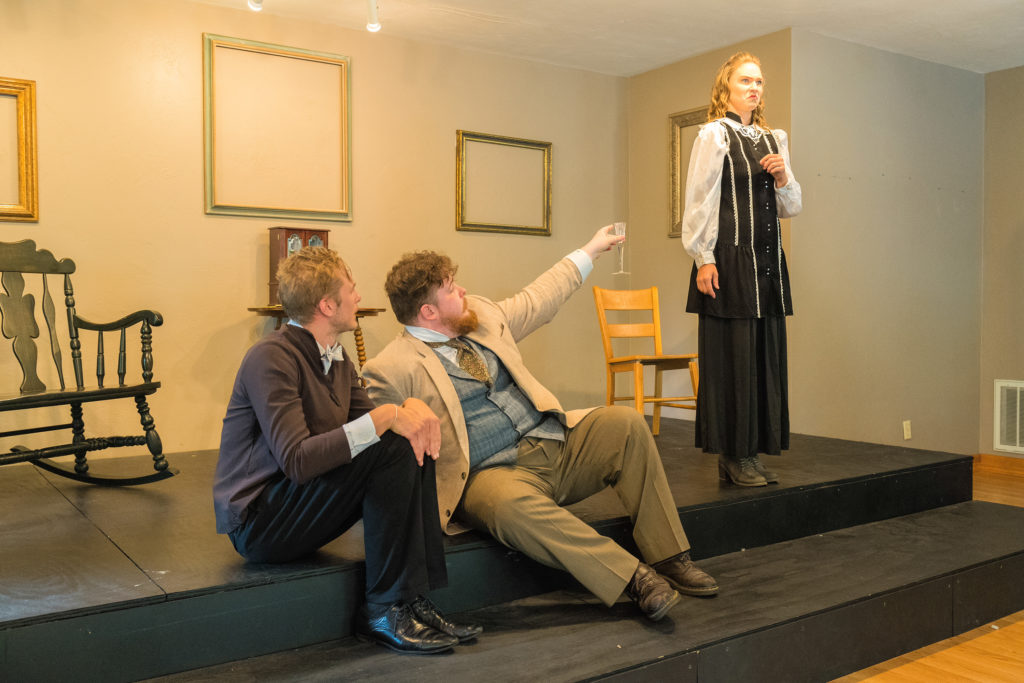 The Bear centers on a mourning widow whose unfaithful husband inspired in her a spiteful promise to remain faithful to his memory. When a man shows up to confront the widow about a debt owed to him by her late husband – and refuses to leave until he is repaid – hilarity ensues. The play opened June 28 at Crescent Studios at the Top of the Hill Shops in Fish Creek and will run through July 2.

Next up is The Conversation, a new play the troupe will write, workshop and perform in a matter of three weeks. The group will work on the devised piece with the help of four Gibraltar High School students.

“The major theme is conversations and what conversations do we have, what conversations don’t we have that maybe we should,” James explained. “It’s very much about talking to each other and engaging, and we’re really going to play around with the idea of conversations both in real life and also theatrical dialogue and how we can play around and mold those things into something more. We don’t know if it’s going to be a series of vignettes or a full narrative arc but we’re excited to find out where that goes.”

James is also the playwright behind Open Door’s final show of the summer 2017 season, Blue Material, which will have its world premiere Aug. 31 through Sept. 3. This play focuses on the death of vaudeville and the birth of realism in America during the Great Depression, and seeks to answer the question: why, in difficult times, are humans drawn to forms of entertainment that reflect their reality rather than distract them from it?

“We definitely wanted to try our hand at three different things: the adaptation, the devising and the full, more traditional experience,” James said. “This season will really give you a breadth of experience with our company. You’ll get to see everything that we do all over one summer.”

Performances of The Bear will be held Friday and Saturday at 7:30pm and Sunday at 2pm. Tickets are $20 for adults and $10 for students. For more information or to purchase tickets, visit opendoortheatercompany.com.