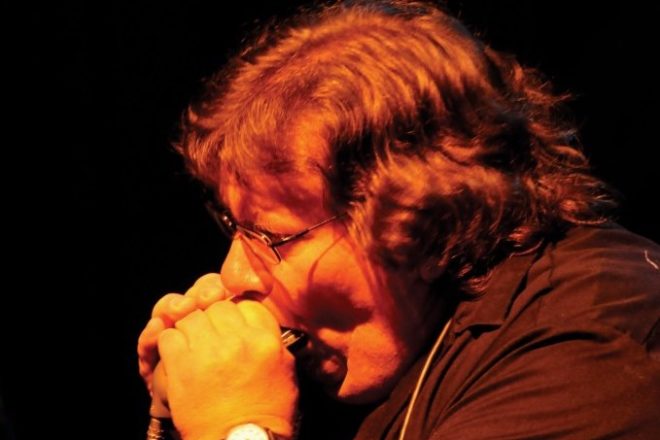 Door County’s emergence as a national arts destination is no secret and, thanks in part to the attention generated by Sturgeon Bay’s annual Steel Bridge Songfest, music shares the arts spotlight during the busy summer months. But what about when winter arrives and most of Door County seems to shut down? I sat down with a group of local songwriters who do anything but hibernate when the temperature drops.

Rick Younglove:  Originally from Chicago, Younglove and his wife relocated to the Door Peninsula in 2007. His original music tends toward bluegrass and folk.

Mark Raddatz:  A longtime fixture on the Door Peninsula’s music scene, Raddatz continues to create compositions and is often joined live by his son Seth, among others.

Seth Raddatz:  A high schooler, Seth Raddatz has a steely edge to his voice and guitar playing that belies his age. Growing up the son of an active songwriter, Raddatz has clearly learned from his father but is carving out a sound and following all his own.

Matthew “Fatty” Fischer:  Fischer is stepson to Mark Raddatz and stepbrother to Seth Raddatz. His compositions often include a dose of humor and just enough edge to keep audiences guessing.

Anna Sacks:  Originally from California, Sacks relocated to Sturgeon Bay after first attending the Steel Bridge Songfest. Her voice stops audiences in their tracks, no matter how crowded the room.

pat mAcdonald:  Perhaps the one name synonymous with Door County music, mAcdonald (his preferred spelling) has been a creative powerhouse for decades. His latest labor of love, Sturgeon Bay’s annual Steel Bridge Songfest, attracts musicians from around the world and he is devoted to the craft of songwriting as something that can literally change the world.

Adam Mackintosh:  A veteran of music scenes from coast to coast, Mackintosh now makes his home in Sturgeon Bay. Like Sacks, he was attracted to a place where he could get down to the business of writing and collaborating with fellow songwriters.

Door County Living (DCL):  When did you first realize that Door County had this burgeoning winter music scene – these open mics and songwriter showcases?

O’Boyle:  What got me interested in it was a chance to air my songs – to get my songs out and have people hear them. I’m able to get them out and some people actually like them!

Mackintosh:  What I’ve noticed about Door County in general is that there are a lot of colorful characters here; there are a lot of great stories and a lot of great storytellers. Anyone can learn to play three chords and use a capo. It’s something that is a craft, but it doesn’t take a lifetime of commitment to learn how to do. You don’t have to mortgage your house to write songs; you can be anybody and write songs. You can take your life and write songs and get up and perform them in front of people, and it’s cathartic – it feels good to chronicle that and it creates this energy around everybody that is working together.

O’Boyle:  And winter helps because it’s quiet. You can work on things.

Mackintosh:  Right, and a lot of artists crave a place of quiet where they can just sit and write. These open mics provide a venue for people to take chances with the stuff they’re creating in the winter months.

Fischer:  It’s sort of a hidden scene, too, I think. The winter is when this place really shines… it’s an intimate setting. In the summertime everyone up here is going to work so much, but in the winter you see people showing up to play their songs and you say, “Whoa… that guy is a songwriter?”

Mackintosh:  The other thing is that there’s no rule here as far as who can come and play… if you wrote it, you can come play it. That sort of non-discrimination has opened up a lot of opportunity for people to get into this.

DCL:  In general, open mic nights feature the chance to get up and play with people you’ve never played with before. What is it like when you first have that urge to play and take that first step – and then down the line you’re having to choose between five songs. Somewhere in there a lot of artistic growth must have to occur, right?

O’Boyle:  You get to the point where you crave the audience. That’s to me what this is all about. To have applause and people hear your song come to life. That appreciation means a lot.

Fischer:  Seth [Raddatz] is a good example of someone who had to work up the courage to do this at first.

Seth Raddatz:  Yeah, I was afraid to play my own stuff. I thought people would think it was no good. But eventually I just got up and played.

O’Boyle:  And the more the performer gets out of you.

Mackintosh:  Exactly! It becomes an exchange.

Sacks:  Another local musician, Tom Schneider Schmidt, always says, “It’s virtuous to lend your ears to those who bare their souls.”

Mackintosh:  He nailed it on the head with that statement.

Sacks:  It’s a really supportive community of artists. I felt that right when I moved here. It was so inspiring to be here and be surrounded by all these great musicians who are sitting there, listening and giving you feedback.

DCL:  At this table we have a nice mix of Door County natives and transplants. Yet I am hearing similar things from all of you about how it is to write up here.

O’Boyle:  Natural beauty has a lot to do with the attraction. Door County started out as an artist community back before the turn of the 20th century.

Mackintosh:  Coming from Portland, you couldn’t get 60 bucks opening up for a national touring act. Then to come here and literally drive through the forest and show up in a bar in the middle of nowhere, where there’s a giant group of people doing exactly your thing – it’s flat out magical. To say, “Wow, I’ve come to this oasis of songwriters doing the same thing as me.” So to come from cities like San Fran, Portland and New Orleans and now to here… it’s a great trade off. You don’t get trampled in Door County.

Younglove:  I don’t think anybody really moves to Door County to “make it,” you know? People move to L.A. or Chicago or whatever. In the big cities it’s who you know more than what you can do. Then you move up here and everyone knows everyone, so that doesn’t matter. It’s all about the art you’re making.

O’Boyle:  And Door County is not like all small areas. There is an intelligence and an awareness of what’s going on in the world. There is something about this area that just attracts artists and musicians.

Mackintosh:  When I moved to New Orleans they’d let me know I wasn’t from there on a regular basis. But coming to Door County I didn’t have to explain myself. I’d say, “I’m a musician, I’m here to write and work on songs,” and people would say, “Of course you are.”

Mark Raddatz:  (Laughs) But I’ve also heard it said that this is the place where artists go to die.

Mackintosh:  Well, good artists need to die about three or four times in their lifetimes, so maybe that’s a selling point, Mark.

DCL:  What makes a songwriter’s showcase different than just an open mic?

Mackintosh:  It’s more about the writing than the performing. I mean, performance is a part of it, but it’s not like American Idol, you know? It’s not that every note has to be pitch perfect or whatever. It’s more that the people who crafted these pieces of art are showing them to you.

DCL:  And there’s a vulnerability in that, I’d imagine.

Younglove:  And you have to play the bad notes before you know they’re bad.

Seth Raddatz:  Or if it’s a sour note, you just bend it.

DCL:  A lot of people who’ve never been to Door County don’t realize it’s a great arts area. But it’s clearly more than cherries and lighthouses.

Sacks:  Oh yeah. I mean there’s an open mic almost every night of the week. Even in the winter.

mAcdonald:  I sometimes write some of the best summertime songs during the cold of the winter. It’s that cabin fever… the cold. It does that.

Mark Raddatz:  There’s always been a winter music scene up here. Before, though, it was more about bar bands.

Mark Raddatz:  Yeah. And it keeps getting better.