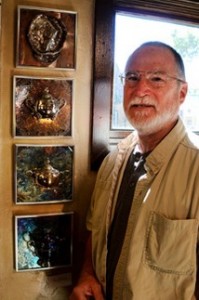 Two years ago, metal smith John Whitney underwent shoulder surgery and while recovering discovered, “You get desperate to do something.” So he crushed an antique teakettle.

“These pieces came about by accident,” he laughs, gesturing to a series of metal pieces – antique teapots, elaborate sterling silver plates, large bowls, and cake stands – bent and manipulated, displayed on copper backdrops on the walls of D.C. Studios in Egg Harbor. “They started on a whim,” he explains, when he took an “old beat up teakettle and crushed it with a vice.”

Whitney moved on to a few pewter pieces. “Pewter behaves differently,” he admits, studying his work.

“Not everything works,” he laughs. “Sugar bowls are my latest concept – they simply collapse, so I haven’t quite solved the sugar bowls yet, but they are nice on their own.” 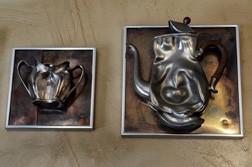 With each object – kettle, bowl, pitcher – Whitney “plays” with the shape, such as large teakettle with a lid. “I played with the lid separately and finally decided to let it ‘float’ over the piece, it adds much more depth. I just play with variations.”

Whitney collects the antique pieces from resale shops and antique malls. “People now give me old pieces they have abandoned,” he explains. “Not many use these anymore.”

To practice form, engage creativity, and find inspiration, Whitney participates with a drawing cooperative at the Artists Guild in Sturgeon Bay. “I don’t draw for completion,” he explains. “It’s a source of shape and form.” 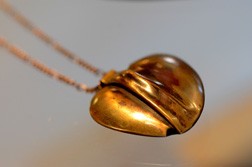 Whitney’s first “formal introduction to art,” as he calls it, was receiving the Boy Scout Art Merit Badge while growing up in central Illinois. When he was a sophomore in high school, “I knew I wasn’t suited to be a vice president of John Deere,” he laughs, “so I went to the art department.”

From there Whitney attended Grinnell College in Iowa for his undergraduate degree and was encouraged by a professor, Len Zirkle, to continue his education at the Rochester Institute of Technology in Rochester, New York. There he met professor Hans Christensen, an internationally renowned metal smith who influenced and inspired Whitney’s artistic path.

Whitney also credits the Dada Movement, a literary and artistic movement which began as a protest of WWI and utilized common objects, images, and themes and displayed them in a quirky, colorful, and often sarcastic manner.

Whitney also names artist Marcel Duchamp – a central figure of the Dada and Surrealist Movements – as an influence. (In 1917, Duchamp famously and scandalously submitted a porcelain urinal, “The Fountain,” for an exhibition.) Arguably, Whitney has chosen to work with classier, more visually pleasing objects than a urinal.

After graduating from the Rochester Institute of Technology, Whitney returned to the Midwest but remained in academia, teaching metal, and many other art classes, at the University of Wisconsin – Baraboo/Sauk County for 36 years. 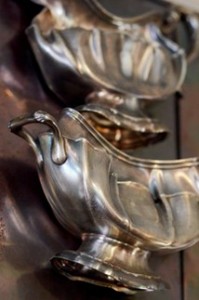 “Now that I’m retired I can go back to what I love,” smiles Whitney, “my first love – metal.”

After retiring from teaching, he and his wife, Jane, relocated to Door County in 2007 to be closer to their son, Caleb Whitney.

“It’s a great stroke of luck that Caleb moved here,” smiles Whitney. “There are so many opportunities [in Door County], particularly in the art and natural science.”

Whitney combined his love of art and interest in natural sciences by helping host the recent exhibit at The Link Gallery, “Reading the Ridges II,” which featured work reflecting the beauty and character of The Ridges Sanctuary in recognition of its 75th anniversary. He has also participated in exhibits at The Hardy Gallery in Ephraim and enrolled in classes at the Peninsula School of Art in Fish Creek.

Next spring, the gallery will move to the new Liberty Grove Arts Center, located on the corner of County Q and Highway 57, just east of Ephraim.