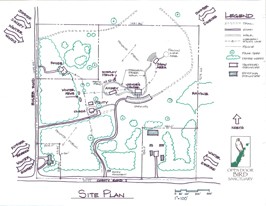 After working as an avian rehabilitator in locales as far away as Ireland and as close as Milwaukee, Rob Hults is relocating to Jacksonport where he’ll be opening up Open Door Bird Sanctuary.

“When the concept of founding my own sanctuary came up, the first thing that we looked at was where would be the ideal location for it,” says Hults. “Door County was just really a perfect fit.”

Hults, who will be the executive director of the future raptor and songbird sanctuary and has been a frequent Door County visitor, says that the county’s environmental awareness was a key factor in his and his wife Jilliane Burton’s decision to bring not just a bird sanctuary, but their home, to Jacksonport.

The other important factor was the county’s location within the state.

“There are no other facilities even remotely close to here,” says Hults. “The closest place that does wildlife rehabilitation is Bay Beach Wildlife Sanctuary in Green Bay.”

Mike Reed, executive director at Bay Beach Wildlife Sanctuary, says that his facility, which accepts all kinds of animals for rehabilitation, received 4,700 animals last year. He hopes that Hults can get set up as soon as possible.

“There’re not as many wildlife rehabilitation centers around the state as there used to be. It’s a real time and financial commitment to provide proper care,” says Reed. “The more help we can get, the better.”

Hults is committed to providing the right kind of care to the injured birds that will utilize his sanctuary. He already has a full site plan laid out for the property on County I, complete with a rehab center, an aviary which will house the sanctuary’s resident birds, a visitors’ center, and an outdoor amphitheater for educational shows. 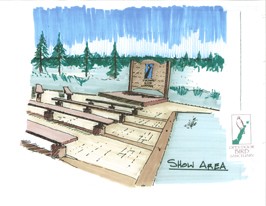 He says that as much as the center is about providing a safe place for injured birds to be nursed back to health – and possibly live the remainder of their lives – it’s also about educating the public and creating interactions with birds that people wouldn’t have otherwise.

“What we do wouldn’t be possible at all without the education aspect,” says Hults. “If nobody knows about birds, nobody will care, and we won’t have people that are willing to take time out of their day to help an injured bird.”

Hults is hoping to begin construction and open the actual wildlife sanctuary next spring, with the other components of the facility falling into place over the next few years as money and time permit. He says many in the county have already shown a tremendous amount of support for the project, and it’s still growing.

Hults and Burton recently took a big step towards that goal when they sold their home in Jackson, Wis., and began their move to a rental unit in Sturgeon Bay. That rental unit will serve as their base of operations until they can build their new home adjacent to the sanctuary.

Open Door has already started fundraising and recruiting volunteers, and Hults is looking for Door County residents interested in serving on the board of the non-profit organization.

He also wants to make connections with as many schools, festivals, parks and other local institutions as he can, so that he can travel and perform educational shows once the sanctuary is up and running.

With any luck, says Hults, both he and Open Door Bird Sanctuary will soon become a fixture of the Door County community.

“I want this thing to survive me by 200 years,” says Hults. “That’s my goal, is for this thing to be functional and operational and for the land to be preserved forever.”

Those looking to become involved with Open Door Bird Sanctuary can contact Rob Hults at 920.724.1399 or [email protected].