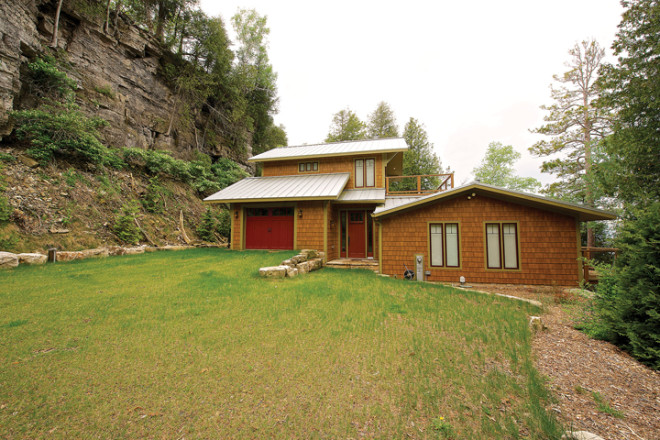 “It’s not easy to be green,” sang Kermit the Frog.

But Brian Bartel, who has received green certification both from the Madison Area Builders’ Association and the Wisconsin Environmental Initiative, would disagree. The plaque on his wall proclaims that his lakeside cottage “meets or exceeds the sustainable building and energy standards of green built remodeled homes.”

“I heard someone speak in 2007 who said you don’t have to completely reinvent yourself all at once” to become green, Bartel said, “but little things here and there” add up. He laughs. “I like the idea of worms eating my kitchen scraps!”

In 2009 Bartel and his physician wife Kimberly Winburn bought a three-season home perched partway down a bluff on the shore of Green Bay south of Ellison Bay. The couple and their children, 6-year-old Finn and 3-year-old Eleanor, have a primary home in Green Bay and wanted a vacation cottage in Door County. The elderly couple that sold them the house had purchased it when they were Bartel’s age. During the transaction he mused, “We might be doing the same thing one day.” 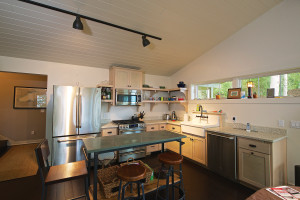 Although the idea of having a getaway to escape the busyness of city life appealed to him, he was well aware of the irony that the best way to reduce the size of his carbon footprint was not to have a second home. “But since we were going to,” he said, “we decided to do the best we could.”

Visitors agree that he has indeed done well. A narrow gravel lane leads to the site, a steep craggy bluff on one side and the scenic waters of the bay on the other. Bartel’s house is literally built on a rock, nestled on a ledge amid trees and native vegetation, almost a part of the landscape. The energy efficiency of the structure has not compromised its aesthetic integrity, with the natural look of shingled siding, metal roof and wooden deck.

The only sacrifice required for this green lifestyle is slight, Bartel said. The geothermal heating system is slow to warm the house for a winter visit, but they build a wood fire to keep cozy as they wait.

One of his favorite aspects of the setting is “how quiet it is, not a sound,” unlike their neighborhood in Green Bay. His human neighbors on the bay are seasonal, and during winter foxes, turkeys and eagles share the community.

“One time I startled an eagle in a tree as I stepped out on the deck,” he said, pointing to a birch not far from the house, “and it took off!” 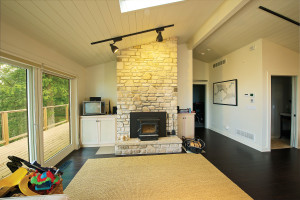 An open-concept kitchen, dining and living space along with two small bedrooms and a bath occupy the footprint of the original cottage. An entrance hall and a laundry room were added, both at different levels to accommodate the terrain, in addition to a second floor for the master bedroom and bath. A balcony-style deck follows two sides of the home. A flight of stairs built by the previous owners wends down to the rocky shore below.

The biggest challenge the project presented to Bartel was the test of his patience. “Sometimes the pace we went at was frustrating!” he smiled.

Because of his eagerness to move in, he painted the sub floor and improvised a kitchen (with a card table, microwave and dorm-sized refrigerator) before the remodeling was complete.

But the little things added up, just as points accumulate on the check-off sheet used to award the status of a Green-Built Remodeled Home. While Bartel’s project needed a total of 60, he exceeded that number with a 79. However, the process was of the “little strokes fell great oaks” variety, because several items on the check-off list were only valued at one point, the largest no more than four.

A walk around the exterior of the house reveals a number of green items, some not immediately apparent to the observer, such as the small grassy front lawn point-getter. The soil has been stabilized with a plastic geo-grid and planted with a no-mow, low-moisture fescue grass that allows the space to accommodate vehicle parking without damage to the lawn. 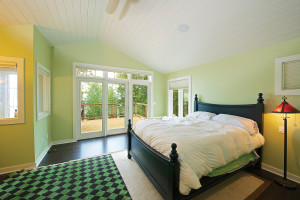 The faux-wood shingle siding is actually a long-life cement product that resists mold. The metal roofing, like the siding, was chosen for its longevity.

Local stone has been used as a buffer for rocks that might slide from the bluff, for exterior facing of basement walls under the deck, and for pillar supports of the deck. Native cedars were planted to secure soil at the base of the bluff, and firewood stacked along the bluff side of the house serves as additional protection.

The decking lumber is a man-made material that incorporates recycled wood fibers and could be itself recycled in the future without harming the environment.

Some of the improvements were governed by safety considerations, especially for children. Bartel added metal fencing along the crest of the bluff and on the sides of steps leading down to the shore.

One of the little things that delights Bartel (and earned a point!) is his vermiculture compost container tucked away among trees. Worms replace a garbage disposal, reducing kitchen scraps in volume as they compost.

A visit to the basement leads to still more point-getters, including motion-sensor stairway lights and an energy efficient spray-foam insulation on the interior of the basement walls.

But the centerpiece of this space is a geothermal heat pump that uses the constant 50 degree ground source heat, tapped through two 150-foot “wells” dug into the earth. An electric backup system supplies heat when outside temperatures drop below 15 degrees. 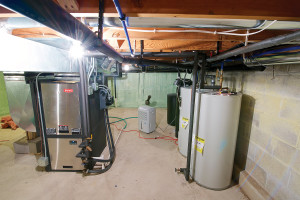 Near the heat pump, a heat-recovery ventilator exchanges inside with outside air, refreshing quality while moderating temperature. And a two-tank water heater system uses one tank for recycling heat loss from the geothermal pump to raise the temperature of water before it travels into the second to be electrically heated for household use.

Conservation of heat is a key factor in a green home. “We have insulated a lot” for heat retention, Bartel noted, not only interior wall spaces, but also weatherproofing the installations of doors and windows.

The main floor living space continues to accrue points with bamboo flooring, as well as energy efficient windows and shades. Skylights provide natural illumination as do exterior windows in the stair well leading to the second level, and interior windows opening into the master bedroom. Energy Star appliances in the kitchen replace the earlier improvisations.

While the trees and native vegetation provide a windbreak to the north, gaps offer glimpses of the bay. However the second floor master bedroom provides a spectacular panoramic water view. As this room is one of Bartel’s favorite areas in the house, he has positioned a comfortable chair near the windows to “watch the freighters go by,” along with a host of other boats, a traffic more serene than that found on the streets of the city of Green Bay.

Bartel researched the building project using readily available online resources, including LEED Certification for building green. While Bartel did some of the work in his lake home, such as installing light fixtures, for the most part he relied on an architect and contractors to realize his vision for energy efficiency.

Although excited by available new technology, he is uncertain at this point regarding the financial payback because future energy costs are unknown. But the ethical satisfaction pays huge dividends.

The Bartels’ 1920s-era home in Green Bay is presently undergoing a green transformation, “slowly but surely,” he said, using the knowledge he has acquired from the work on his lake home.

Although the cottage fulfills Bartel’s philosophical goal of leaving a small carbon footprint, the low maintenance factor allows him the opportunity to spend quality time with his family.

“When the four of us come up here I don’t want to do chores, but to enjoy it together,” he said. “I like that we’re up high, a nice view, but we have a stairway down to the dock.”

And at the same time, the life is contemplative and restorative, “Quiet,” he said, “not a sound.” An easy kind of green.