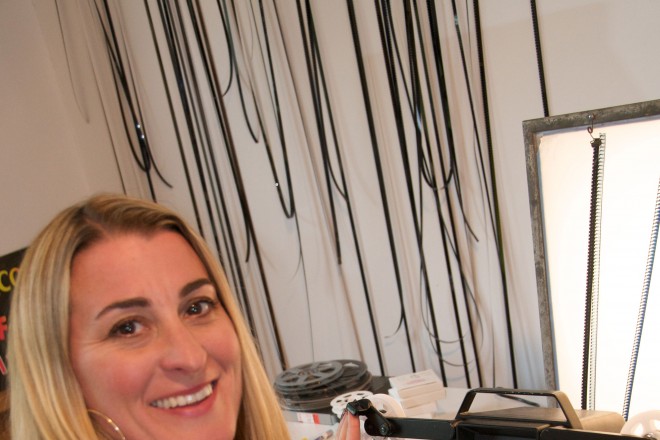 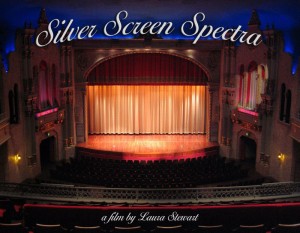 the Fish starring Tony Shalhoub of the television show Monk. Several of us involved in local theater were cast in small speaking roles and discovered they really do say, “Lights, Camera, Action!” We also learned that the talent in filmmaking is not necessarily in front of the camera. This film adventure was definitely an “a-ha” experience, so it is no wonder that I jumped at the chance to interview one of Door County’s emerging filmmakers.

Laura Stewart’s film, American Carnival:  A Tale of Two Wisconsin Carnivals, funded by the Peninsula Arts Association and the Wisconsin Arts Board, brought her statewide recognition. In person she is young, passionate, knowledgeable, vital, imaginative and upbeat. It is somewhat of a surprise to discover that she opens her lens on the “untidy” aspects of life for her subject matter:  the Dark, the Underbelly, the Unacceptable, the Lost and Forgotten, the Visceral, the Avant-garde. Ric Risch, a former Peninsula Arts Association board member, spoke to this unique quality of Laura as an artist:  “She has an honesty and a rawness that she brings to her documentaries. It is her very special kind of energy.”

Laura says this attraction to the darker side may have begun with two movies she saw that influenced her decision to pursue film in college. Drugstore Cowboy, a realistic look at the life of unrepentant junkies was the first, and the second, Orson Welles’ Touch of Evil. She chose the University of Colorado at Boulder to study with then faculty member Stan Brakhage, an American master of experimental filmmaking. With his guidance Lau 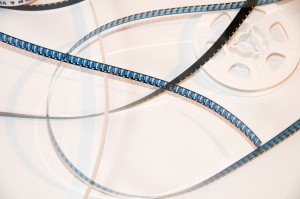 ra produced her first hand-cut and edited film, a short super 8 mm, Ken:  Story of a Western Drifter. She met Ken while working at a Denver health food store. He was an Air Force Academy dropout, became a drifter and a druggie but had dreams of being an actor. In the film he tells his story of addiction matter-of-factly as she zooms out from a close-up of Ken to a long shot of the graffiti-filled walls of Denver’s rail yards. The haunting music by the group Greater Than One plays in the background. It is chilling, sad, but eloquent in its simplicity.

“Many of my films capture the outcasts, the forbidden in society,” Laura says. “I have always been fascinated with what is and what is not accepted. Ken is longing for a home within the despair of the homeless. It’s all about contrasts. What is unspoken, neglected, forgotten, feared is what attracts me.”

This fascination traveled with Laura to Europe for further study at Vienna’s Academy of Fine Arts. She was given a 16 mm camera from her teacher, the Austrian experimental filmmaker, Kurt Kren, which she used to make 90% Virgin, her second film, about Vienna’s red light district, another film about outcasts and contrasts. “Vienna is a very socially structured society where formally dress 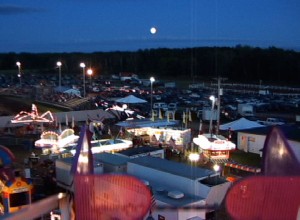 ed old ladies await the bus in front of sex shop windows,” she says. A fortunate “accident” occurred while filming:  “The camera jammed and my attempt to fix it resulted in several superimposed pictures of a risqué Viennese sex shop mannequin over old Vienna’s imperial palace. I liked it so much that I did it again on purpose by rewinding the film for several other sections.” When Laura’s visa ran out she returned to the states to complete her Bachelor of Fine Arts degree in film at the University of Wisconsin-Milwaukee in 2003.

An idea for her third film drew her back to Door County where she’d spent summers growing up. Laura’s “magical memory” of Jacksonport’s annual carnival would be the subject of her first full-length film project and she set about funding it. Due to the high cost of film she switched the format from film to video necessitating her learning computerized editing for the first time. Laura received the Peninsula Arts Association grant and supplemented with family “donations” and then traveled with two carnivals for the next two summers:  Mr. Ed’s Magical Midway with annual stops in Sturgeon Bay and Earl’s Rides, the family-run operation she remembered from Jacksonport. (This carnival has been replaced by Jacksonport’s Maifest in recent years.) The film that resulted is itself a magical yet realistic look at “carnies” and the world they inhabit – a world of hard work and fierce loyalties, but a world always as an outsider. 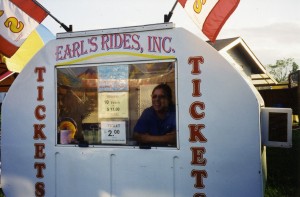 American Carnival opens with an auditory punch of gears grinding, seats squeaking as the calliope plays its haunting madcap theme. We meet beer bellied Zipper Mike who brags about his ride, “I had a 66-year-old guy ride it and when he got off he felt young again.” Handsome Jack, the ticket taker:  “Women are always hitting on you for a free ride saying, ‘I’ll meet ya later.’ That never happens.” Greg, the romantic, says that his Ferris Wheel is “so smooth babies fall asleep on it.” Travis, a boy of 10 and the nephew of the owner of Earl’s Rides, finds it necessary to tell the camera, “We still have fun like normal people.”

Laura’s ability to gain the trust of her subjects is a talent. They open up and share themselves through her lens with an in-your-face, riveting honesty. Her camera techniques and choice of shots appear as an enhancement to the story rather than calling attention to themselves. In the “tear down” sequence for example, she creates a feeling of melancholy by shooting the carnies’ beat up trailers waiting in the shadows behind the bright lights and tinkling sounds of the midway. The full moon provides a backdrop for the closing fireworks and soon the Ferris Wheel is brought down in a series of collapsing motions folding into a rectangle and loaded onto a flatbed truck. In the background we hear one of the carnies, referring to the tear down, say, “That’s 55,000 pounds of iron coming down.” 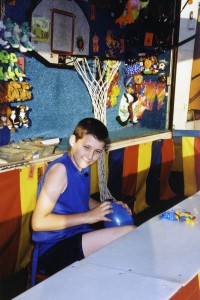 Throughout the film, the sounds of the carnival are heard as background so when Laura uses music purposefully it calls attention to and further develops the off balance, out of time world she is focusing on. We hear Tom Wait’s gravelly voice singing “I Don’t Wanna Grow Up” as the camera zooms out to a full shot of the entire carnival going at full tilt, lighting up the night, and the credits roll. Laura received special permission to use two of Tom Wait’s songs and the help she received from local musicians Pete Thelen and pat mAcdonald and sound engineer Chris Niedzwiecki is a story meant for another article.

Laura will continue her theme of the outcast and the forgotten in her next project, Flickering Palaces, the stories of abandoned movie theaters. She hopes to use film again since Kodak now offers a more affordable product, but more importantly she wants to return to the format she learned from Brakhage. “He always lectured us as students that video and film were two completely different mediums. Film is all about that play of light, that stream that comes from the projection booth and dances in the air ‘til it hits the screen. Movies are meant to be seen that way.”

Simeon Moore, a filmmaker for over 15 years with Ramni Filmworks in Brooklyn, New York and a colleague of Laura’s, sums up the combination of her love of light and penchant for shining it on shadows:  “Laura Stewart has a unique way of bringing to light what we all see and often take for granted.”

And that’s what Laura Stewart’s art is about.