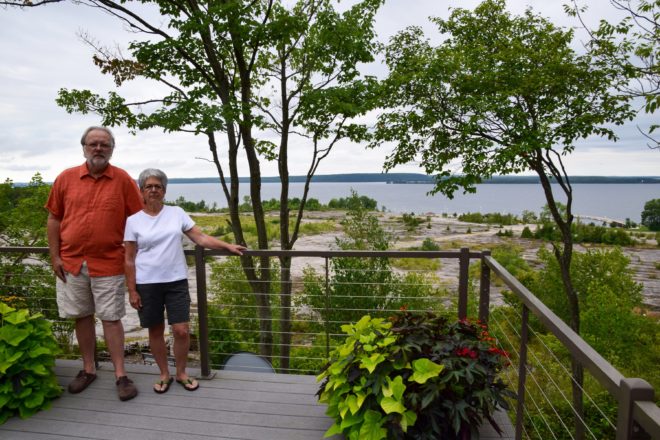 Jeff and Brenda Lange live on the overlook of a proposed RV village for 117 RVs. “We are in jeopardy of losing the natural beauty and solitude of our area,” Brenda said. “This development, in this location, is wrong on so many levels.” Photo by Jim Lundstrom.

Developers have yet to submit project’s papers to the county

There has been no official plan submitted to the county’s Land Use Department, but residents near the old Leathem Smith Quarry on Bayshore Drive are organizing in opposition to a recreational vehicle (RV) campground proposal.

In July the developers invited residents on Whitefish Bay Road, overlooking the quarry, to a meeting at which they explained what they have planned.

But rumors had already been circulating about the project.

“I first heard about it in April,” said Brenda Lange, who, for 20 years, has lived with her husband, Jeff, on property overlooking the quarry. “It was basically a rumor I heard from a maintenance person who commented on the view and then proceeded to tell me about this development.”

She then called the Door County Land Use Department and learned that although the developers had not yet filed the papers, it was being identified as a campground development.

Lange said she has nothing against RV campgrounds. She has friends who are RV owners, and she said even they think the old quarry is a bad spot for such a development. And although any development in Door County is subject to a Not In My Back Yard (NIMBY) fight, this development is literally in the Langes’ backyard.

“I realize that I’m up here looking at the whole thing and a lot of people aren’t, but it’s not about me,” she said. “It’s about the county; it’s about the wildlife, the environment and the safety. There’s so much on Bayshore Drive now – to add that to the mix would be disastrous.”

The safety issue, she points out, is that people walk, jog and bike on Bayshore Drive. Having 117 occupied RV units and the extra vehicles they usually tow along using that road will destroy its nature.

“We did some figuring on the layout of the proposal, and that’s why we’re calling it a village,” Lange said, adding that a population that’s four-fifths the size of Ephraim would be on a parcel of rock – 52.02 acres – that’s only two percent of the acreage of that village.

“If that tells you anything,” she said. “It would have a huge impact.”

The plan is based on Hearthside Grove, a “luxury” motorcoach resort in Petoskey, Michigan. The initial design plan drawn up by Baudhuin Surveying & Engineering of Sturgeon Bay for Quarry Bluff LLC shows a tennis and pickleball court and two ponds (one with an island), surrounded by 117 RV sites, 115 cottages and almost 16 acres of impervious surface – or almost 32 percent of the site.

“I would like to think if they are paying attention to the voices of the concerned public, they will see the amount of opposition,” Lange said. “We don’t want them. We have nothing against RVers and campers. It’s just that it’s not the right place for it.”

The Bay Shore Property Owners Association has weighed in against the proposal, and a Facebook page and website have been created (No Quarry RV Village).

“It’s really just the last couple of weeks [when] we really started circulating the news. We’re hearing voices of people from all over not approving of it,” Lange said.

Next week we’ll have a look at the project from the developers’ perspective.