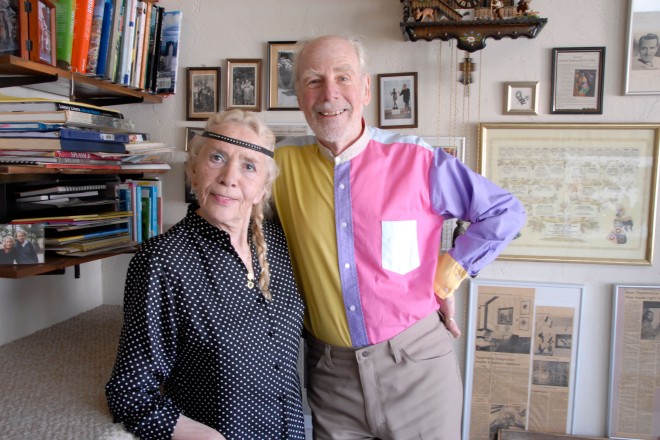 As a girl who spent many summers in Ephraim, I visited Hanseatic Art Gallery frequently, but one visit when I was 16 years old always stands out in my mind. I had just started to enjoy art, and even though I had seen many of Karsten and Ellen Topelmann’s paintings, the beauty and detail of their work hit me as it never had before. Ellen’s acrylics were romantic, bustling with people and their expressions and movement. Karsten’s oils and watercolors  revealed a passion for landscape with a focus on architecture. I remember looking at those canvases for hours, constantly discovering another detail I hadn’t seen only moments before.

At the end of that visit, Ellen told me she needed to get something for me. She came back with a small framed print. It revealed a wedding scene, with an ethereal, rosy-cheeked bride as its main subject. “You look just like her,” Ellen said to me. “I want you to have it.” My heart swelled, and to this day I have not had a gesture in my life affect me quite as much.

I tell this story because this is what drives the art of Karsten and Ellen Topelmann. The couple paints from a place of optimism, love, and pure happiness – a place they are keen on sharing with others.

Karsten and Ellen grew up at opposite ends of Germany. Karsten was born in Munich, where his father was an architect and painter, and his mother worked in clay. Trips to galleries and art museums were frequent in the family, and when it came time to go to school, he knew what he wanted to study. “When I went to school, I studied both types of art – painting as well as design. I wanted to make a living, and I knew learning design would help me,” he says.

Ellen grew up in Hamburg, and learned animation drawing and cartooning in addition to fashion and architectural drawing. She says that even as a young girl, she understood the business of art. “I would always be asked by friends at school to draw their portraits and I’d always ask, ‘What are you going to give me?’” she laughs. “I was an entrepreneur early on.”

Both came to the United States in the early 1950s and settled into jobs in the Chicago area – Karsten as an art director and Ellen as a creator of animation drawings for television shows and commercials. The two met through a mutual friend in the art community. “North and South Germany typically do not mix – our dialects are so different,” says Karsten. “I told my friends and family back home that Ellen was from Hamburg, and they acted like I was out of my mind. But it didn’t matter much in the United States.”

A year after he came to the States, Karsten visited Door County with a friend. Taken with the beauty of the peninsula – especially the tiny village of Ephraim – he snapped a photo of the Anderson Dock and sent the photo to his family back in Germany, along with a letter telling them that it was one of the most beautiful places he had ever seen. He later brought Ellen to the peninsula, and soon Karsten, Ellen, and their three children were visiting Door County every summer. And every summer, Ellen says, “We were sad to leave it behind.”

The family was in Baileys Harbor one year for their annual summer visit when Karsten spotted a log cabin for sale. On a whim, he put in an offer for the property, but it was rejected. The next summer, the Topelmanns noticed that the old Larson Cottages on Highway Q in Ephraim had been put up for sale.

Ellen – not Karsten – was ecstatic, although the cottages lacked some of the accoutrements they were used to in the city, such as heat and insulation. Karsten is quick to say that his wife had enough optimism for the both of them. “I was a bit more worried about how we would make money and get supplies for our work, but Ellen was always very positive – she thought of a million ways to get by.”

The Topelmanns purchased the cottages in 1969, and the entire family moved up the following spring. The first order of business was to get the new art gallery ready by Memorial Day. Karsten and Ellen decided to name it Hanseatic Art Gallery, in honor of Ellen’s hometown of Hamburg. Hamburg at one time had been part of the Hanseatic League, a title given to a group of medieval German and Scandinavian towns.

“The day we opened the gallery, it was pouring rain and the whole front yard was full of rainwater,” says Ellen. “And still, we saw people hopping the rocks to get to our front door.” Karsten and Ellen sold their paintings for $10 to $30 and enjoyed a good first summer. Then, reality struck. “We didn’t realize that the season was so short,” says Ellen. The family had to go back to Chicago for the winter.

In 1972, the Topelmanns were prepared to spend another winter in Chicago when Karsten found the opportunity that would allow them to spend their first winter in Door County. The Chamber of Commerce was looking for someone to design and assemble their first guidebook. Having worked as a designer for many years, Karsten put together a proposal and won the job. “I remember coming home and swinging Ellen up in the air, shouting, ‘We can stay!’” he laughs.

Sales at the gallery increased, and the couple was able to sell some acreage in Jacksonport. These two events allowed them to build their own home about seven years after opening the gallery. Ellen admits that her and Karsten’s enterprising spirit helped matters greatly.

“Someone would come in looking for a painting of a specific Door County landmark or building, and I would tell them, ‘He’s working on one right now. Could you come back tomorrow?’ Then I’d go to Karsten’s studio with a list of what he’d need to paint for the next day!”

While the summers meant business, winters would mean travel in later years. Karsten and Ellen found two spots abroad that appealed to them – the Canary Islands off the coast of Africa, and the medieval German town of Rothenburg. “We would go to the islands with canvases and paints, and we’d work there for about two months,” says Karsten. “Then we would go to Rothenburg for about three or four months.” Both places were quite important to their creative work.

Painting in close quarters made collaborations between the two inevitable.

“The first painting we did together was a Czech church,” says Ellen. “Karsten painted the church, and I drew in the people.”

Sometimes the joint effort is done without the other even knowing. “I love to hide things in Ellen’s paintings!” Karsten says, pointing to a skating rink scene done by Ellen. What looks to be lines in the ice made by skates is actually the word “Love,” which Karsten painted in when Ellen wasn’t looking. He also hides details in his own paintings, one of his favorites being the ice cream cone “stars” he painted in a nighttime scene of Wilson’s Restaurant. “It makes people happy to discover these details,” he says.

While Karsten and Ellen admit they are entirely different in terms of approaches and subject matter – Ellen is more interested in figures and movement, while Karsten loves the detail found in architecture, landscapes, and flowers – both say they appreciate the critique that the other can offer. “Sometimes your nose is so close to a painting that you don’t know when it’s not working,” Ellen says. “It’s good to have someone to bounce ideas off of.”

Karsten agrees, adding, “One of the privileges of being an artist is that you can discard things. Not finishing a painting is just as important as finishing one. For me, it is also important to work and finish my paintings in an effortless manner.”

This summer, the Topelmanns will open the gallery for its 39th season. They are a respected pair in the county’s rich art community, with reputations that often precede them. “One day I was in the gallery and this woman came in,” says Ellen. “She said to me, ‘I was told that I have to come here, because the Germans who own the gallery are absolutely hysterical.’ I laughed and told her she was in the right place.”

And yes – if you are looking for an artist experience in the truest sense of the word, visiting Karsten and Ellen Topelmann at the Hanseatic Art Gallery would indeed be the right place to go.