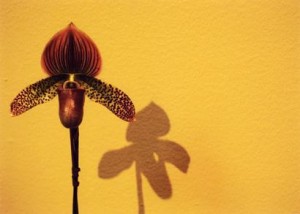 While some may say, “It’s just another flower,” we found this image to capture exactly what we were looking for in this year’s contest. The vibrant colors of the orchid and its backdrop encourage the viewer’s eyes to linger, allowing the full allure of the photo to be conveyed. The interplay of light and shadow accentuate the exquisite detailing of one of nature’s creations in contrast to the stark outline of the flower’s shadow. This year’s first place photo captures much more than just another flower.

Rena Zaid is an award-winning photographer and mixed media artist. Her work has been included in juried group shows, solo shows, and has been featured in arts & literature publications.