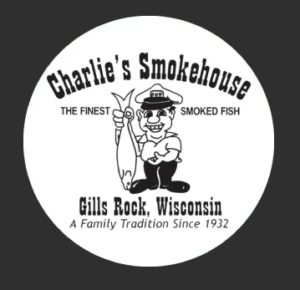 In 1932, Leroy “Roy” Voight opened his smokehouse, on the Gills Rock dock, at the tip of Door County.
With a cigar box for a cash register, he and his wife Caroline sold their smoked chubs
to summer visitors of this small fishing community.
Roy’s son Charlie worked alongside his father since the 1950s, and upon Roy’s death in 1974,
Charlie and wife Bonnie began running the smokehouse.
Over the years, locally caught whitefish, as well as trout and salmon, were added to the product offerings.
In 1984, it was decided that the smokehouse would begin staying open on weekends
throughout the winter, and to also begin shipping fish. From this decision to start shipping,
a unique problem arose: the business needed a name. Prior to this, people had always just referred
to the store as, “the smokehouse on the dock,” or some variation thereof, but it came time to be more official.
So, the store that had no name for fifty years became “Charlie’s Smokehouse.”
In the fall of 1988, “Charlie’s” moved off the dock, to its present location, on the top of the hill in Gills Rock.
Today, Charlie and Bonnie still run the store. Their son Chris smokes the fish and his wife Jill works in the store.
Chris and Jill’s three sons have also joined in the enterprise becoming the 4th generation to learn the smoking process.
While many things have changed since the days Roy ran his little shop on the dock,
one thing has remained the same: the Voight family still maintains the tradition of providing
the finest smoked fish to its customers, smoked using the same method Roy did in 1932.