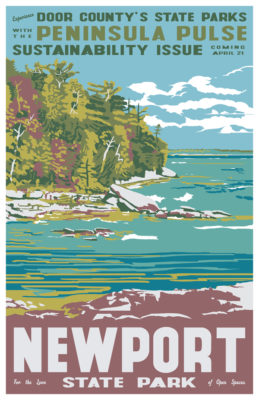 Founded: 1964
Acres: 2,373
Annual visitors:164,008 in 2016
Camping: 16 Backpack camping sites
Trails: 30 miles of hiking trails and 17 miles of off-road biking trails; 26 miles of cross-country ski trails
Beaches: 11 miles of shoreline include large sand beaches
Highlights: Newport is the state’s only formally designated wilderness park, so it remains more secluded and quiet than most, making for great camping. Also, though they’re less technical than those at Peninsula, Newport has more miles of off-road bike trails and they’re less crowded than its popular western shore neighbor. Park received International Dark Sky recognition in 2017; Hotz Nature Center
When you go: Check out Europe Lake – this quiet inland lake is great for a paddle

A strange mix of conservation and isolation resulted in Newport State Park, the first wilderness park in the Wisconsin State Park System. After state agencies determined is was, “without the slightest doubt the most outstanding state park possibility along the Lake Michigan shore,” local residents were worried that their quiet north woods would become a tourist trap.

The state first became interested in the property in 1946, but it wasn’t until Sept. 25, 1964 that the state established Europe Bay State Park. Since Door County already had more than 4,500 acres of state park land, the county board needed to approve the new state park. Michelle Hefty, superintendent of Newport State Park since 1989, said that this county board approval might have played a big role in keeping Newport wild when the state was hoping to turn it into a Peninsula-like revenue driver.

“[Locals] didn’t want another Peninsula State Park,” Hefty said. “The park, when it first was formed, was supposed to be a 100-unit campground, heavy day use and the locals and the people fought it. They did not want it.”

Well, the locals won against the state and the first wilderness state park was born. That designation means that the park must stay in its most natural state. Development and infrastructure to increase day use is not allowed. If the park was a little bit bigger and didn’t have its only road, it would fall under the federal standard for a wilderness.

The designation has made some things difficult at the park. As the state moves towards self-sustaining funding, parks such as Newport are limited in their ability to bring in more revenue through campsites, concessions, equipment rentals and other attractions.

But the park is finding ways to make its wilderness attractive to a different kind of visitor. Newport is awaiting designation by the International Dark Sky Association, the first in Wisconsin and only the second in the Midwest. The rustic campsites are also attracting a new generation of adventurers hoping to leave city life behind for the weekend and head into the wild.

1919: Ferdinand Hotz purchases 1,400 acres near the village of Newport, all of which became Newport State Park

1946: State Planning Board and Wisconsin Conservation Department calls the Newport area, “without the slightest doubt the most outstanding state park possibility along the Lake Michigan shore.”

Sept. 24 1964: Established as Europe Bay State Park after approval from the county board

1994: Nature Center is built next to the old park office

2015: Newport State Park submits an application to become designated as a dark-sky park with the International Dark Sky Association

The Newport Wilderness Society (NWS) founded in 1985 and its contribution to Newport State Park has shifted since then. It is made up of 247 individual and business members. During its formative years, the group underwrote and sponsored the publication of several brochures and pamphlets educating about the area including flora, fossils, birds and the park’s history.

In 2008, the group finished raising more than $230,000 to build and outfit the Hotz Wilderness Room and the park naturalist office, but beginning in 2010, the NWS started providing funds to hire park naturalists and since then, hiring park staff has eaten up most of the NWS budget. 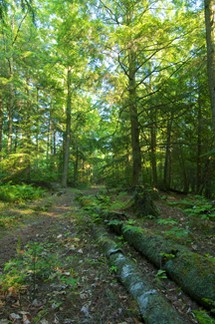 Universe in the Park and Perseid Meteor Shower