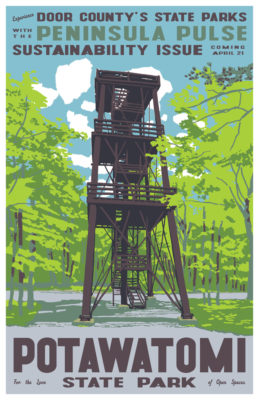 Founded: 1929
Acres: 1,200
Annual visitors: 214,298
Camping: 123 sites, 40 with electricity. There is also an accessible Cabin by the Bay that was designed by people with disabilities.
Trails: 9.5 miles of hiking and 8 miles of off-road bike trails.
Attractions: Home of the eastern trailhead of the Ice Age National Scenic Trail, 75-foot observation tower and views of Green Bay from the escarpment, overlook of the park’s old ski hill, several picnic areas and playgrounds, more than 2 miles of shoreline, canoe, kayak, paddleboat and bicycle rentals, boat launch and fish cleaning station, nature center and park store.

Before it became a state park, the property where the park now stands served as a quarry for the federal government. Stone from that quarry was the first export from Door County. The location was also considered as a military fort, a U.S. Naval training center, an ammunitions factory, a grazing area, a game preserve, a camp for disabled veterans and a national park.

But long before that, the area was home to the Bo-De-Wad-Me tribe – today known as the Potawatomi. The name means “keeper of the fire.”

The Indian agent at Fort Howard first brought the rugged 150-foot limestone cliffs and safe harbor of the area to the attention of the federal government in the 1830s. The quarrying operation began in 1834, with the condition that the stone could only be used for the building of breakwaters and harbors. By 1917, nearly every harbor around Lake Michigan was constructed with Door County stone from what became known as Government Bluff. While serving as a quarry, the property was off limits to the public.

In 1904, members of a board appointed by President Theodore Roosevelt visited Government Bluff to consider it as a site for the Great Lakes Naval Training School. The board ultimately opted for a location in North Chicago, Ill., as the home of the Naval Station Great Lakes.

In 1916, in the middle of World War I but still a year before the United States entered the conflict, Government Bluff was briefly considered as the site for a munitions plant.

Also in 1923, the United State’s Engineer’s Office called for sealed proposals for leasing Government Bluff for the purpose of grazing, but nothing more came of that. A year later, the area is suggested as a site for a camp for disabled veterans.

All the well-publicized talk of doing something public with Government Bluff prompted David Cody, a descendant of a group of Menominee that disbanded from the tribe in 1838 to join Americans in fighting the hostile Fox tribe, said his people were promised the land of Government Bluff and he promised to “contest any and all claims on it.” Cody continued to make claims to the land. In 1925, six members of the family issued a statement that said, “Always we were awaiting government payment which was promised us. We shall not make any attempt at once to stop any movement taken as rumors to make a park of this government bluff lands, but we shall demand a settlement of if Uncle Sam wants to remove us from there or the Chamber of Commerce of Door county wants this land for a park, they can buy us a home elsewhere.”

Also in 1927, The Door County Izaak Walton League promoted a plan to turn Government Bluff into a game preserve, an idea that did not go far.

In 1924, Congressman Schneider tells the Door County Chamber of Commerce that Nicolet National Park will not happen because at 1,200 acres it is too small for national status.

Finally, in 1928, the state formed an advisory council to look at purchasing Government Bluff from the U.S. government for the purpose of a state park. Door County residents Frank N. Graas and Albert Kalmbach served on that council, along with famed naturalist Aldo Leopold.

That summer, the Wisconsin Conservation Commission toured the future park and made recommendations for an access road through the park, a campsite, and a look-out tower.

The state Conservation Commission gave the honor of naming the new state park to the Door County Chamber of Commerce. Several names were suggested, but the majority voted for Potowatomi State Park. However, that name did not meet with universal approval. Several chamber members pointed out that it was a difficult name, and one member said it had been spelled four different ways since it was first suggested, but the majority agreed that the historical significance of naming it for the tribe that once lived on that land was more significant than difficulty in spelling the word.

At an April 1929 meeting of the Sawyer Commercial Club, the organization voted to provide $500 to erect a 75-foot observation tower at the park.

On Sunday, May 26, 1929, the final day of the annual Cherry Blossom Festival, Gov. Walter Kohler, Sr., dropped a wreath on the park from his airplane before arriving to dedicate the park. Kohler was one of the first politicians in the state to travel by air. The park was finally opened to the public the summer of 1930, and the observation tower was built the next year.

The federal government begins to quarry limestone at what became known as Government Bluff. Stone was Door County’s first export, and it was used in almost every harbor on Lake Michigan. While under government ownership, the public was not allowed on the property with a 150-foot scenic overlook.

Members of a Naval Board appointed by President Theodore Roosevelt visit Government Bluff as they consider sites for a Great Lakes Naval Training School, but the board eventually ends up choosing North Chicago, Ill. as the home of the Naval Station Great Lakes.

Government Bluff is briefly considered as the site of a government munitions plant.

Locally, Sturgeon Bay attorney Thomas Sanderson champions the creation of a national park at Government Bluff. Sen. Irvine Lenroot and Congressman George Schneider lead the charge in Washington, D.C. The name Nicolet National Park was suggested by Sanderson because Jean Nicolet is believed to have stopped near the bluff in 1634.

Congressman George Schneider of Appleton tells the Door County Chamber of Commerce that Nicolet National Park is probably not going to happen because at 1,200 acres, the park is too small for national status.

Government Bluff is suggested as a site for a camp for disabled soldiers.

The park is finally opened to the public in summer.

A 75-foot observation tower is built at the peak of the bluff, financed by the Sawyer Commercial Club.

WPA workers help build a bathing beach at the campsite.

Friends group forms to bring back the RunWild!