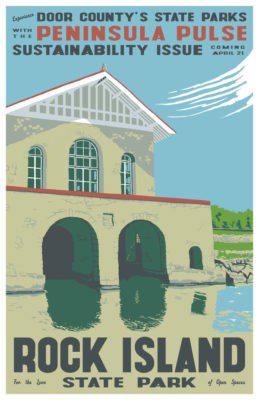 Rock Island State Park is Door County’s most removed state park, but perhaps its most rewarding.

Getting here from the mainland requires two ferry rides, but the final leg presents a stunning arrival as you pull up to the majestic Thordarson Boathouse.

No cars are allowed on the island, so you’ll have to hike to the sprawling sand beach on the other side, or hike your way up to Wisconsin’s oldest lighthouse, the Pottawatomi Lighthouse.

Founded: 1965
Acres: 950
Annual visitors: estimated 69,563 in 2016
Camping: 40 rustic campsites
Trails: 10.5 miles of hiking, no bikes allowed on the island
Beaches: Half-mile sand beach
Attractions: Rustic camping, the Thordarson Estate, Pottawatomie Lighthouse
When you go: If you want a quiet beach, Rock Island is your place. The sand beach on the north side of the island was recently lauded in Minnesota Monthly magazine as one of the last “remains of old Door County.”

Home to the oldest lighthouse in the state, Rock Island’s modern history dates back to 1832 when a group of Detroit merchants lobbied Congress to build the Pottawatomie Lighthouse. In 1836, Congress obliged.

From there, it became a frequent stop for merchants seeking entry to Green Bay, even through the perilous waters of Death’s Door. It boasted a small community before Washington Island took over as the epicenter of island life.

Chester Thordarson, an Icelandic native with little more than a seventh-grade education and an imagination, bought nearly the entire 950-acre island in 1910 with a few dollars he had leftover from inventing the first million-volt transformer. He quickly moved to develop the island as his home with a boathouse, great room, mess hall and living quarters. He wanted the island to remind him of his native Iceland. The Thordarson boathouse that still sits on the island today is just one example.

The famed inventor died in 1945 and the island passed to his two sons. In 1962, Jack Hagen, chairman of the Washington Town Board, suggested preserving the island as a state park.

When the state conducted a feasibility study of the island in September of 1961, controversy ensued.

The study found the island to be valuable, but wholly inaccessible. Guido Rahr Sr., member of the Wisconsin Conservation Commission for 23 years, felt that this lack of access wasn’t worth the price. He wanted to spend those funds protecting land that would be of greater use to the public.

Rahr had a point. At that time, the Washington Island Ferry wasn’t running daily trips to the island and the state thought it would need to build a causeway between Washington Island and the new state park at a massive expense. Rahr felt that if the only way to get to the park was by private vessel through the treacherous waters of Death’s Door, perhaps there was a better state park candidate elsewhere.

But the five other commissioners overruled Rahr and the state purchased the land for $175,000 in 1965. They immediately began razing many of Thordarson’s buildings and making the island available for camping.

In 1967, the Washington Island Ferry Line solved the accessibility issue when they brought the 36-foot Karfi to the northeast corner of the island to transport park visitors.

Since then, Rock Island has rested quietly off the shores of Washington Island until the turn of the century. What was once a hard-to-reach destination for a group of cultish adventurers has become a statewide attraction seeing nearly 70,000 visitors in 2016, an increase of almost 400 percent since 2001.

1836 – Pottawatomie Lighthouse built on Rock Island with funds from Congress

1912 – Chester Thordarson buys 775 acres of the island. The rest, including the lighthouse. is owned by the federal government.

1920 – Thordarson begins building his estate including the boathouse, mess hall and bunk house.

Dec. 11, 1961 – Door County Board of Supervisors approves the acquisition

June 12, 1964 – State Conservation Commission approves the purchase of the land

The Friends of Rock Island State Park have helped the park function since 1995. Their board members and volunteers serve as lighthouse docents and guides to visitors during the summer and the group has raised funds to restore both the Pottawatomie Lighthouse and Thordarson boathouse to a historic and functional state

There are no upcoming events at this time.