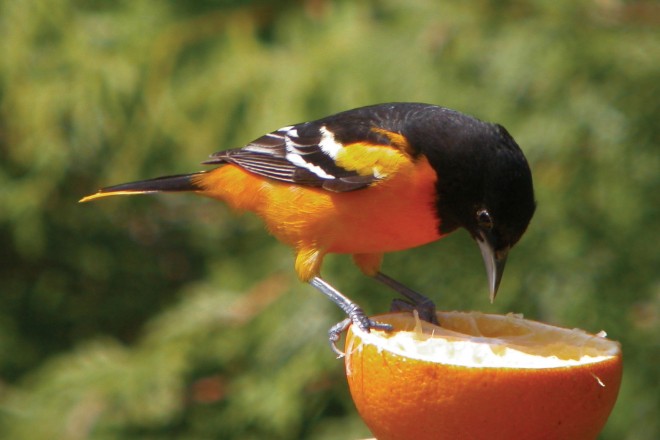 An adult male eating an orange. Photo by Roy Lukes.

So many people we’ve talked with in recent years enjoy excellent numbers of Baltimore Orioles at their feeders each late spring and summer. Apparently, it was in previous years that the orioles had good nesting success in our region, enjoyed favorable wintering conditions with adequate food in the South, and experienced safe flights back to Door County making their population so high.

We study the orioles in our front yard from the first day they arrive, which usually is during the first week of May. There are days when as many as a dozen or more feed together making us feel that some of them have been at our place in previous years. Banding studies reveal that adults often return to the same areas to nest in successive summers.

Male birds usually arrive in early May (occasionally late April) several days before the females and are quite silent all during that time. Suddenly, the first females arrive at the orange halves and grape jelly and immediately the males produce their golden-throated welcome outpouring of strong, beautiful, liquid notes. Shortly after the pairing has been accomplished the male will sing relatively little, other than the short calls and songs used to maintain contact. The persistent singing you will hear after mid-May will be from the first-spring, unmated males, either searching for a female or practicing for the next year. By the way, the females also do some singing.

Adult females and first-spring males are quite variable, presenting the need for those who observe them closely to consult their various field guides. Some females lack black on the head while others have considerable black both on the head and throat. They have two white wing bars, as opposed to one on the males, are generally brownish-olive on the back while their orange color is quite “washed out” and not nearly as brilliant as that of the older adult males. My best educated guess is that the intensely colored males, sporting deep, rich orange chests and bellies may be three or more years old. The male is the only oriole in North America with a fully black hood and back, orange in the tail, single white wing bar and orange shoulder patches on black wings. Immature fall males lack black on the throat but may also be highly variable in overall color. There’s little wonder this species has become such a popular and well-loved bird wherever it nests.

Few other bird species can match the female Baltimore Oriole in nest construction, as she possesses such great dexterity in her legs, feet and beak. What she may lack in color is made up for by her unbelievable weaving artistry. So well built are the nests, which are used for only one summer, that it is not uncommon for one to survive the winds and storms of three or four years before finally disappearing completely.

Even though the male may help a little in the building, the female is the primary architect. Stringy plant parts included in the nest may be fibers of grapevine, grasses, Spreading Dogbane, the strong silky strands of last year’s Common Milkweeds and tail or mane hairs from horses. It is not uncommon in the South to find nests which have been fashioned entirely of Spanish Moss, also referred to as “Old Man’s Beard,” belonging to the pineapple family rather than to the lichen group.

Generally, the nests are entered from the top, but I have seen several nests with what appeared to be an additional side entrance. With some nests being as deep as eight inches, perhaps what appears to be a side entrance is nothing more than a “window” for the adult to look through while incubating the eggs.

It was during the period in our recent history when the dreadful Dutch Elm disease killed nearly all of the American Elm trees in much of the U.S., that the bird experts began feeling sorry for the Baltimore Orioles. Studies had indicated that nearly 85 percent of their nests were built in elm trees.

Fortunately, the Baltimore Oriole is a very adaptable bird, and appeared to suffer very little in having to use other tree species for nesting sites, trees such as Eastern Cottonwoods and Silver Maples. We’ve seen their nests in Quaking Aspens on our property, and one around eight feet off the ground in an apple tree, right in front of our friends’ living room window.

The orioles surely can consume the flesh of an orange half quickly. It is then that we place a few tablespoons of grape jelly into the hollowed-out shell. Once those get a little too beat up we put those halves on the ground and place jelly there, too. The orioles don’t mind that a bit. Their natural food consists largely of nectar, caterpillars, insects, spiders and fruit.

It was when George Calvert, the first Lord Baltimore, visited the Virginia Settlement that he enjoyed many birds along the Chesapeake. The species with breathtaking, orange and black flame-colored beauty, smaller than a American Robin, later was to bear his name. So impressed was he, as the story is told, that he took their colors, orange and black, for his coat of arms. A remarkable record was established on the 7th and 8th of October, 2001 in Baltimore, County Cork, Ireland, when the very first sighting of a Baltimore Oriole in all of Ireland was made.

It is on rare occasions that a Baltimore Oriole spends a part of the winter in Door County. A brilliant male spent around one month, from mid-November to mid-December in 2007, at people’s feeders along Stone Road south of Sturgeon Bay before it suddenly disappeared or perished.

Lord Baltimore, what an honor it is having one of our most brilliant and artistic songbirds – singer deluxe – named after you. Hopefully many of you number yourselves among the fortunate people who have Baltimore Orioles brightening your summer yards and lives.