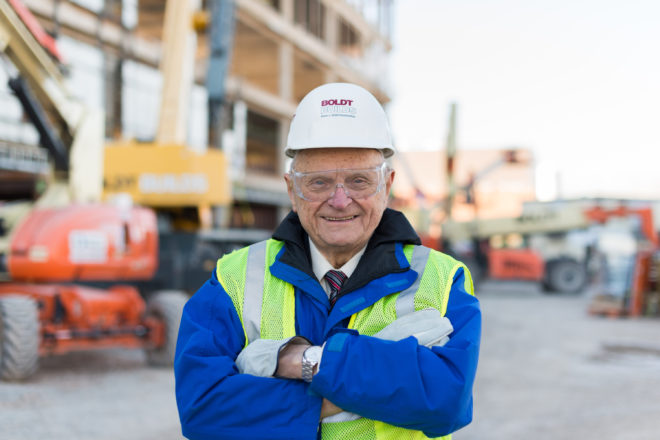 Ephraim had a special place in the heart of construction-industry titan Oscar Boldt. Submitted.

When construction industry giant Oscar C. Boldt died last week, he was remembered not only as the man who built the Boldt Company into a $900 million business and one of the leading construction-management firms in the country, but also as a philanthropist who helped to build the civic life of the Fox Valley.

The man known to his friends simply as O.C. also made an impact on Door County and particularly Ephraim, where he worked quietly to preserve the history and aesthetic of a community he loved.

“He loved the nature of the area, but I think he really loved to make the pieces of the community connect with each other,” said Sally Jacobson, former executive director of the Ephraim Historical Foundation, for which Boldt once served as board president. “He worked hard to keep it beautiful and preserve historical aspects.”

LISTEN: For more on Oscar Boldt, listen to this week’s Door County Pulse podcast. Myles Dannhausen Jr. shares details from his conversations with Boldt’s friends and colleagues beginning at the 14 minute mark.

Boldt and his wife, Pat, became seasonal residents of the village in 1968 and were regular attendees at Bethany Lutheran Church, where Boldt often sat in the last pew at the back of the church. Many credit him with keeping the church alive. At one point, membership was down to fewer than 10 people, and the church was on the verge of closure. Some members feared the property would have to be sold, and the famed steeple on the Ephraim hill would become a condominium. He thought of an arrangement to donate the church’s three properties to the Ephraim Historical Foundation, “to take the money off the table,” and create a perpetual easement so that even if the church died, the foundation would maintain it as a historical site.

“Oscar had this incredible ability to get involved in a situation that was very messy and cut right through it,” said friend Chuck Pearson. “He would do it so quickly. He could separate all the baloney away, and do it gracefully.”

Today the church survives, as does the historic district of Ephraim that helps to preserve the community’s distinctive look, including the trademark steeples on the hill.

Through the years, Boldt’s company has been involved in many signature community projects around the peninsula, to the extent that it’s hard to drive even a few miles without seeing some of his company’s work. The Ridges Nature Center, Björklunden, Door County Medical Center, the Kress Pavilion and the Door County Maritime Museum’s Maritime Lighthouse Tower all have Boldt imprints. And his company not only built the new theater at Peninsula Players, but Oscar and Pat were among its major donors and supporters.

“They were so supportive of the arts and Door County as a whole because it was part of what drew them to Door County,” said Peninsula Players Managing Director Brian Kelsey. “And he wanted to see Door County be a successful place and for the nonprofits to be sustainable.”

Boldt was born in 1924. He served as a B-24 navigator in the Air Force during WWII, then earned a civil engineering degree from the University of Wisconsin-Madison. In 1949, he married Pat, who was still at his side when he died June 9. He took over the family company from his father, Oscar J. Boldt, in 1950, when it was reportedly on the verge of bankruptcy. He transformed it from a home builder to a firm focused on large-scale community projects such as churches, schools and hospitals.

Boldt was known as a humble boss who worked harder and longer than anyone in the company, yet drove old cars and shunned the spotlight. Friends and colleagues credited his patience, intelligence and problem-solving skills for growing the company into what it is today, but at heart, he was a man who loved construction and was known to visit job sites and pick the brains of his workers. If they were lucky, they caught a ride with Boldt, which usually meant a stop for an ice cream cone.

Gary Stanton worked for Boldt as a project manager for 33 years, getting his start in 1966 when the firm numbered fewer than 15 salaried employees. Something that he gained from his mentor sticks with him today – a lesson learned when Stanton had bid and managed a job that lost “a considerable sum of money.”

“I personally felt responsible for it, and I met with Oscar to tell him about it,” he said.

Stanton nervously approached Boldt to tell him he felt he should make up for the loss. Boldt sat back in his chair, put his hands behind his head and asked a question: “Did you learn anything doing this project?”

Stanton said he did.

“I have a philosophy,” Boldt replied. “Education always costs money when you get it. So go ahead – there will be many projects in the future. Just don’t make the same mistake again.”

Stanton was stunned by the trust Boldt put in his employees and his willingness to support them through both words and the company’s money.

“It made us want to return the favor with successful projects,” he said. “I never forgot that lesson.”

Though Boldt handed the reins of the company to his son Tom and President Bob DeKoch in 1990, he worked well into his 90s, continuing to serve as chair.

“The company will go on, but Oscar’s passing will be the end of an era,” Stanton said. “There just won’t be anyone quite like Oscar.”

Boldt’s loss will also be felt strongly in Ephraim: a tiny hamlet and its history that captured his imagination.