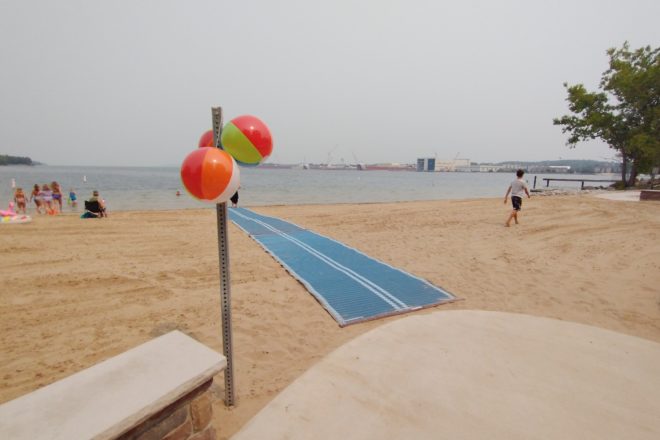 Otumba Beach is now the only beach in the county with a Mobi-mat: a pad that starts at the pavement and rolls out across the sand to allow those in wheelchairs to easily reach the water.

Sturgeon Bay’s Otumba Beach was decorated with inflatable beach balls and smiling faces Wednesday as community members gathered for a ribbon-cutting ceremony to celebrate the completion of a major beach-expansion project.

The beach now has greater depth and can better withstand storm damage. It ends with curved walls that function as seating on one side and border new plant landscaping on the other. As speakers addressed the grand-opening crowd, visitors were already enjoying the new beach.

Sturgeon Bay Alder Gary Nault said he cherished Otumba Park as a place of community. He described fond memories of the beach during his childhood – he took swimming classes there, and he often swam out to a popular raft that was situated in the corner of the beach at the time.

“This is a neighborhood park, and [its neighbors] have definitely kept a keen eye on what’s going on,” Nault said. “Last Saturday, I saw the neighbors down here raking the weeds out of the beach.”

ADA Accessibility Features Were among the Improvements

The ceremony unveiled ADA accessibility features among other park improvements.

Mayor David Ward introduced Stephanie Birmingham, owner of Birmingham Counseling and Consulting, who strongly advocated for the ADA-accessibility inclusion in the beach-expansion plan. She said it all started with a Facebook post and took off from there. Otumba Beach is now the only beach in the county with a Mobi-mat: a pad that starts at the pavement and rolls out across the sand to allow those in wheelchairs to easily reach the water.

“I hope that it’s a step in the right direction of greater accessibility in the City of Sturgeon Bay and throughout the parks system,” Birmingham said.

The grand opening offered attendees a complimentary lunch and beach balls to take home, but it didn’t mark the end of the improvements. Further plans include upgrading playground equipment and adding overflow parking.

Ward told a story about how Otumba Park got its name. He discovered that in 1931, the city had a contest to name what is now Sunset Park. Otumba was a name in the running that didn’t win, and it eventually became the name for this park on Sturgeon Bay’s west side.

The mayor thanked the members of the Parks and Recreation Board, Alder Spencer Gustafson and public-works employees for making the beach expansion such a success.