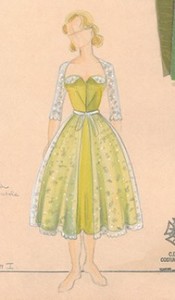 The sketch of a dress worn by the character Margot in this summer’s Peninsula Players Theatre production of Dial M for Murder.

This summer, costume design has taken Fish Creek resident Karin Kopischke to London in the 1950s, Ireland in the 2000s, and the American South in the 1980s.

Two of those shows, Dial M for Murder and Outside Mullingar, were costumed by Kopischke for Peninsula Players Theatre and the other, Steel Magnolias, for Third Avenue Playhouse.

For each show, the design process begins with a meeting between Kopischke and the director, where they discuss the play, and what the director hopes to achieve through the costumes.

“The director kind of has the final say, and the initial say about how things are done,” she said.

Then Kopischke begins to research the production.

“If we use Steel Magnolias as an example,” she starts, “It was pretty straightforward. It was set in the 1980s and it was about six women.”

For part of the research process, Kopischke creates an image collage of the time period, and of certain actresses or people whose look she wants to emulate. For the Steel Magnolias character Truvy, who is a hairstylist, images of 1980s hair stylists and beauticians were included in the collage.

For another Steel Magnolias character, Annelle, who has a quirky, vintage style, Kopischke’s collage was composed of images of Zooey Deschanel and Elaine from Seinfeld.

Kopischke’s daughter, Anya, played the role of Annelle and requested that her character wear glasses.

“She thought of her character as a more quirky character, so she wanted glasses to add that quirkiness, and also as something her character could hide behind,” she said.

The actors that Kopischke costumes often make requests related to their characters’ appearance.

“The actor comes to the first fitting, and they have thought about this character just as much as I have,” she said, adding “In some cases we are on the same page.” 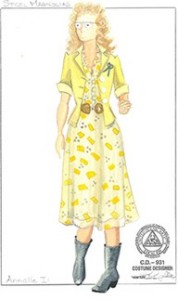 The costuming process begins long before most productions are cast. After a collage for each character is complete, Kopischke begins a rough sketch of their costumes.

After deciding with the director about the direction of the rough sketches, she creates a final rendering. From these detailed watercolor and pencil renderings of the characters, the costumes are built or shopped. At the top of the sketch, Kopischke staples fabric swatches that form a little tassel of the material selected for the costume.

Some of the material is sourced locally, from Jo-Ann or Hancock Fabrics. Other material is purchased online, in Chicago, and New York.

For the Peninsula Players production of Dial M for Murder, all of the women’s costumes were built.

“It took place in London in the 1950s and it was all very elegant,” she said.

Kopischke oversees the production and fitting of the costumes, but rarely builds them. The complex, fantastical costumes that she designed for the First Stage Children’s Theater in Milwaukee production of Big Fish were built in-house.

For smaller and more contemporary productions, like Steel Magnolias, Kopischke searches thrift shops and vintage stores for costumes. Costumes for the recent Peninsula Players production of Outside Mullingar, which takes place on a farm in Ireland in the early 2000s, were also shopped.

Contemporary plays present extra challenges for the costume designer, and sometimes tests the relationship between the actor and designer.

“For period plays, it is easier for them to trust the costume idea because it is something they are not familiar with. The contemporary plays, they know exactly what they are supposed to look like,” Kopischke said.

Period productions give Kopischke an opportunity to learn more about clothing and history.

“It’s fascinating for me to look at the clothes in different centuries, country’s cultures. Those are the most fun to research and design,” she said.

The historical research that Kopischke conducts prior to creating a costume ensures that characters are accurately dressed for the time period the play is set in, for their social class, and culture, and also creates a more specific, personal story for each character.

Lived-in “gritty” costumes provide more satisfaction for Kopischke than pretty period dramas, and lend a more personal history to each garment. To achieve a lived-in quality, she distresses the costumes after they are built and sourced, adding holes and wear to new clothing.

“I like dealing with the reality of the clothing they are wearing, versus a pretty costume.”