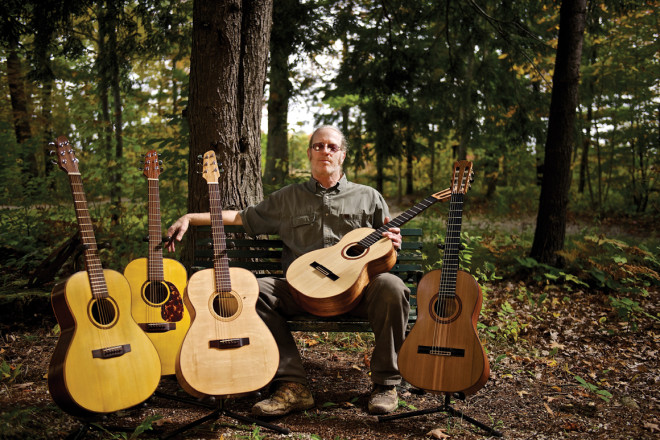 When Dale Kumbalek was a kid, one of his favorite trees served a dual purpose as a jungle gym and mini-maple syrup factory.

Little did he know that as an adult in Door County, pieces of that tree would make their way into his woodworking shop and leave as a beautiful, one-of-a-kind, hand-built guitar.

It was almost as unexpected as the non-guitar playing Kumbalek turning his woodworking talents toward making the instrument. 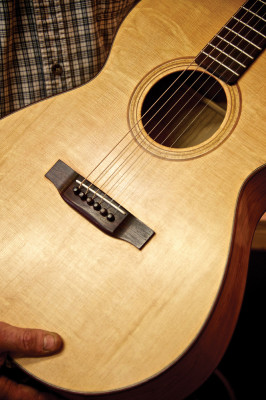 It all started in the summer of 2013, when Kumbalek made his way from Green Bay to Egg Harbor to join his partner, well-known Door County artist Dawn Patel. The idea was that the couple would open a combined business.

When the business didn’t work out, Kumbalek moved forward with his guitar-making venture, Kumbalek Tonewood.

Woodworking has been a lifelong hobby of Kumbalek’s, whether as a hobby or through his involvement in the construction trade. But it wasn’t until more than a decade ago when Kumbalek’s woodworking, guitar-playing brother, Dean, built his very first guitar that the encouragement for Kumbalek to do the same began.

“He kept trying to coax me to build an instrument because of the enjoyment he got out of the music,” Kumbalek said. “I don’t play guitar, but I’m learning.”

That coaxing continued for six years until Kumbalek silenced the pleas in 2008 by joining his brother on a trip to Mississippi to meet a luthier. Luthiers are individuals specializing in constructing and repairing stringed musical instruments.

For the next year, Kumbalek continued meeting luthiers from Arkansas, Louisiana and Minnesota. He also began researching the art of constructing stringed instruments and finally put his knowledge and woodworking talents to the test by building his first guitar.

“It turned out really nice and it was kind of a rush having someone be able to play an instrument you built,” he said. 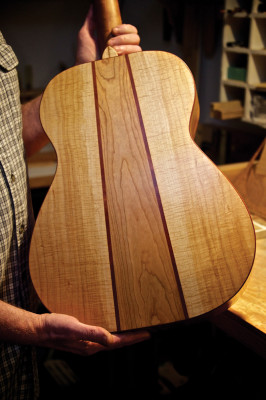 Although Kumbalek was unfamiliar with the ins and outs of guitars, he quickly learned a new mantra:  it’s just woodworking.

It all begins with sharpening of tools and selection of wood, with careful consideration given to the wood that will make up the top of the guitar. Usually, spruce or cedar is selected due to their growth in cold climates, which creates a tight grain. Instrument wood ideally has 12 grain lines per inch.

Then, construction begins. The average guitar has approximately $600 worth of parts in it and takes between 300 and 400 steps to build, depending on the style of the guitar and its maker.

For Kumbalek, that style is woodworking the old fashioned way.

“I use hand tools,” Kumbalek said. “I use old-fashioned finishes.”

Building one guitar alone takes up to four weeks to complete, spread out over two months to allow for drying of glue and finishes. 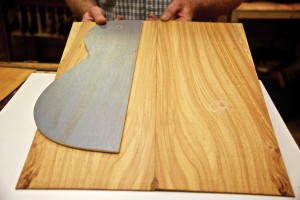 For Kumbalek, the difference between a factory-built guitar and a handmade guitar is in its sound.

“Typically a handmade guitar, the potential to sound better and the playability, it’s all about the setup, the height of the strings, the action,” Kumbalek said. “With handmade guitars, you can customize it … so much is in the sound.”

Kumbalek points to his experiences with the UPS delivery worker who brings him his supplies. The delivery worker had always thought about playing guitar, but never picked one up.

One day, he asked Kumbalek what was in the large boxes he was delivering.

“He had no idea I was building guitars in here,” he said. “He came in and he looked, and he just was amazed. Then he started taking lessons a little bit and borrowed a guitar from his brother. The next time he came, he was able to play a few chords and he said there were some chords he just couldn’t do. He picked up one of my guitars and he said with my guitar he actually could play the chords that he could not play with a factory guitar just because of the setup and the playability of them. He was amazed. He actually goes on break when he comes here at times.

“That is the funnest thing for me, just hearing them being played,” he added. “It makes me want to build another one. When I’m hearing someone play, I’m actually thinking how I can improve different sounds that I’m hearing already.”

Kumbalek likes to keep his guitars as sustainably produced as possible, steering away from endangered trees and harvesting wood that has already been brought down.

In fact, that maple tree from his childhood was struck by lightning 20 years ago. Since it was growing on his brother’s property, they decided to harvest it.

His lumber dealer in British Columbia is the same way, an eco-harvester who cuts trees that are blown down or cut for other reasons. Some pieces of wood he has provided Kumbalek were bridge stringers from the Alaska Highway, originally cut in the 1940s and used until they were replaced by concrete and steel.

Kumbalek described it as some of the best wood in the world for making instruments due to its 60 years of air-drying and the flexing of the wood from vehicles that have driven over it.

Beyond that, the list of woods he has worked with is endless, from maple, cherry, walnut, sapele, primavera, beng, cebil, bloodwood and leopardwood. 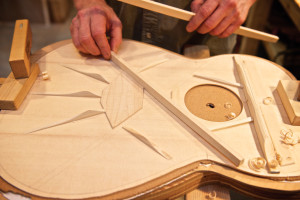 “For me, it’s all about the different woods and combining them to make something that you have a predetermined idea of,” Kumbalek said. “Whether it really works or not, you don’t know.

“It’s all theory, everyone’s got their own opinion. It’s a lot of engineering, is what it really is. I’ve always been interested in putting things together, taking things apart.”