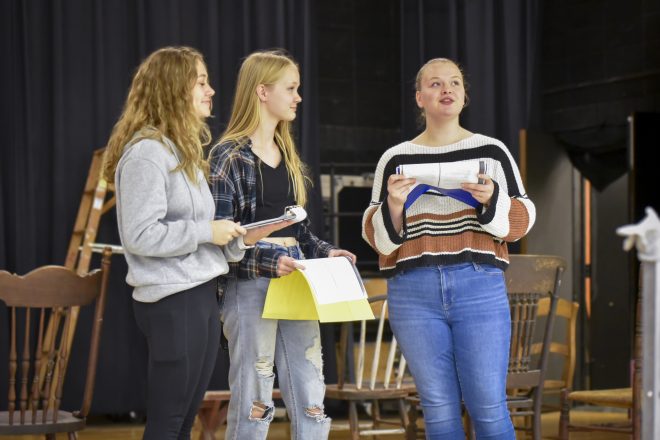 Our Town emphasizes being present not just for the big moments in life, but for every little moment, too.

“A Pulitzer Prize–winning play, Our Town is frequently taught as part of the English curriculum at Sevastopol,” said director Amy Ensign, “so I thought it would be nice for students to experience a fully realized production of the piece.”

Our Town’s unusual approach to storytelling was well ahead of its time when it premiered in 1938. It’s considered a metatheatrical piece, which means that the play does not hide the fact that it is a theatrical production. As a result, the set is not realistic. For example, to depict the second floor of the houses in the play, characters stand on ladders. There are also no walls in the houses, which allows the audience to look straight through to the heart of the characters’ daily lives.

“It helps to draw more attention to the words of the play,” Ensign said. “It also allows the audience to connect individually to each character. We put ourselves in their place by imagining what the world of Grover’s Corners looks like.”

Thirteen high school students, five middle school students and one alumnus make up the cast. Sevastopol didn’t have quite enough students to fill all the roles, so 2017 Sevastopol alumnus Isaiah Spetz stepped in to take on the role of the stage manager. He earned his BFA in drama last spring from NYU’s Tisch School of the Arts and has been in Door County working with Northern Sky Theater since May.

The last time Sevastopol put on a production of Our Town, then–science teacher Paul Leline played the stage manager, so it’s not a new concept to cast an adult in that role.

“We are just so delighted to be able to work on a play on the stage,” Ensign said. “It has been a devastating year for theater. We are just now beginning to see some theaters open for the first time in a year and a half, and we are very happy to be one of them.”

There is no cost to attend this three-act, two-intermission production – to take place in the elementary gymnatorium – but there will be a free-will offering. Obtain free tickets at the door.