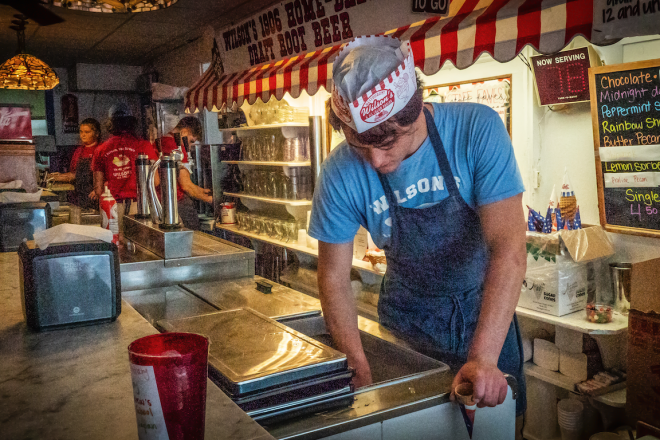 Restaurants across the county are taking on more customers with less staff than in 2020, leading many to reduce hours and services. Photos by Rachel Lukas.

As you drive through any of the towns and villages up and down Door County, you’ll see a repetitive sight: “Help Wanted” signs posted in front windows, sometimes accompanied by a polite explanation that the establishment is understaffed and a request for customers’ patience.

Door County isn’t the only area to feel the pinch from a lack of workers, nor is the job shortage limited to the restaurant industry. But in the wake of a pandemic that flipped the hospitality industry on its head and forced businesses to get creative to stay afloat when the customers weren’t coming, those same businesses are now struggling to stay afloat during one of the busiest tourist seasons on record.

The labor shortage is hardly a new challenge to the county’s restaurateurs and food-industry business owners, but the record-high number of tourists visiting the area this year is making the situation exceptionally challenging. This spring, for example, Tom Young, owner of Gibraltar Grill in Fish Creek, saw his busiest May and June in 17 years of business.

“It was great to be that busy, but we could have used a lot more help,” said Young, who is operating with about half the kitchen staff and an even more limited front-of-house staff. “There is no margin for error if someone gets hurt or calls in sick.”

As a result, the restaurant has had to make some difficult decisions, including limiting its menu, reducing seating capacity to about 60% and not offering live music or shuttle service on its six-passenger courtesy cart.

“We’ve had to scale back more than we ideally would to find that balance where we were open enough for the customers but could balance staffing,” Martin said.

Although she relies mostly on high school and college students for a large portion of her workforce, she also usually has J-1 visa students to help round out her staff roster. This year, however, COVID-19-related restrictions bottlenecked the visa process in countries that have historically provided a cultural exchange and a critical part of the county’s summer workforce.

“This year, we don’t have any J-1 students,” Martin said.

“We’re usually open until 9 pm, but there have been days [when] we didn’t have the staff to stay open past 5,” she said. “Consistency is something we pride ourselves on, but adjusting hours at the last minute is sometimes something we have to do.”

It’s a tough position for restaurant owners and managers who feel they are constantly spinning plates to keep both their customers and employees happy.

James Larsen, co-owner of Husby’s Food & Spirits in Sister Bay, said that although many customers have been understanding about longer wait times, there are others who see only part of the picture.

“Especially if they come in and they don’t see every table in the restaurant filled, they think, ‘Oh, why can’t you do my to-go order?’ Larsen said. “I have to explain to them that this is the time when we aren’t up to our necks in tickets in the kitchen, that [it’s a time for the staff] to do the prep, eat something themselves, go to the bathroom. If you fill all the rest of the slow times, [the staff] never gets a chance to look up.”

That’s part of the reason why some restaurants have discontinued – or at least limited – take-out orders.

Even though the Fireside and Big Easy restaurants in Egg Harbor upgraded their phone system to help direct calls to the appropriate business for take-out orders during the pandemic, the demand for carryout orders is now too much to handle at certain times of the day.

“To-go food is still very popular,” said owner Lauren Schar, “but once we reopened inside, it became challenging to offer indoor dining, outdoor dining and to-go food [due to a lack of staff].”

As a result, the restaurants now limit the hours when they can accept to-go orders, and on Aug. 24, Schar announced on Facebook that Big Easy would temporarily close as 15 of her staff members return to college.

“We’ve never seen ourselves as a seasonal business,” Schar said. “But as hard as it was emotionally to make this decision, it was the right business decision for our employees.”

During the temporary closure Schar plans to move staff from Big Easy to the Fireside restaurant.

“By closing The Easy and moving that talent to Fireside, they’ll be working two doubles a week versus five doubles, and we can run the restaurant at full steam,” Schar said. “I am making this choice to sacrifice one restaurant short-term so the other can succeed.”

But the labor shortage isn’t the only factor at work. Shortages in the food-supply and food-delivery industries have also affected restaurants’ ability to engage in business as usual.

“We don’t make nearly the margins on food because food has gone through the roof,” Larsen said.

Young said ordering supplies has also become increasingly difficult and requires more planning than ever before.

“The supply chain has been disrupted,” he said. “There are a number of things we can’t get in in a timely fashion, so we order earlier in anticipation of it being a problem and adjust as needed. We haven’t run out of anything this season, but we’ve come close.”

Martin said that several of the vendors she works with have been unable to source certain products such as waffle cones and some flavors of ice cream, causing her to look for substitutions that may or may not be at the same price set at the beginning of the season.

“All of that drives up food costs,” she said, not to mention the frustration customers may feel when they’re unable to get their favorite item. “I feel bad for the customers,” Martin said. “Most people have been incredibly understanding, but there are a handful that get frustrated, and I get it.”

As the shoulder season begins to come into view, some restaurant owners will be faced with even more tough decisions: close early due to fewer staff as students return to school, or stay open with a skeleton crew and try to weather the remainder of the season.

“We’ve seen the shoulder season growing in Door County,” Martin said. “In the past, students and seasonal workers would go back around the same time things slowed down here. But things aren’t slowing down.”

Martin said she’s lucky in that she can usually rely on family members and friends to help her get through the last leg of the season, but not every employer has that option. Larsen said he’s especially concerned about the number of servers and bartenders he will lose come fall.

“I have a really large number of college students who are doing all the serving and bartending – probably even more than years past because of how it is right now,” he said. “When they all leave, we’re really gonna be hurting.”

The situation is a double-edged sword in many ways. COVID-19 ushered in massive changes that left many restaurants shuttered in its wake. For those still standing, there’s a definite sense of gratitude – especially as some restaurants see record customer numbers – but there’s also the ever-looming threat of burnout.