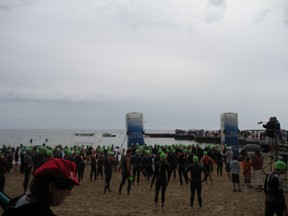 As day breaks on July 18, 2010, Door County Triathlon Race Director Sean Ryan is glued to his radio. A thousand athletes will soon descend on Frank Murphy County Park in Egg Harbor for the Half Iron event, and a bank of heavy clouds hangs ominously over Green Bay.

There are thunderstorm warnings, and Ryan is canvassing the horizon for lightening strikes and getting reports from the National Weather Service out of Green Bay. The Half Iron event is scheduled to begin at 8 am, and Ryan is charged with deciding whether to delay or cancel the event. He doesn’t have much wiggle room – Public Safety allows him to get the race underway as late as 9:30 am.

“We’re making sure there’s no lightening in the area, especially with athletes going into the water,” Ryan says.

He explains this as I walk with him around the event staging grounds. Ryan is always moving, always on the radio or the phone. Brian Fitzgerald, Door County Half Marathon Race Director and the bike and run course director for the triathlon, recounted a story of a time he was on the phone with Ryan for at least 20 minutes before recognizing that Ryan was breathing heavy.

“Did you just finish a run?” Fitzgerald asked him.

“I am running,” Ryan replied on his Bluetooth headset.

It’s just one way he keeps up with a schedule that has him acting as event director for the Green Bay Marathon, Bellin Run, Door County Triathlon, Door County Century Ride, Fall 50, and the Festival Turkey Trot, in addition to working on the staff of other events, including the Boston Marathon. 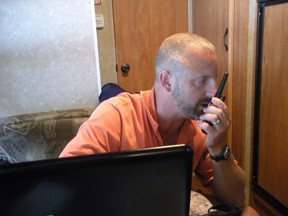 This morning the forecast is sketchy. Ryan delays the start of the race by half an hour, but doesn’t have to cancel. As eager participants bottle nerves on the beach, Woody Mankowski plays a stirring rendition of the “Star Spangled Banner” on the saxophone. It’s now after 8 am, and Ryan, from atop scaffolding set up on the sand, directs the elite wave of swimmers to approach the starting line.

The dark clouds have proven to have more bark than bite. Ryan sends the first wave of swimmers into conditions that, after a morning of doubt, are nearly perfect. The water is warm, with scarcely a ripple for swimmers to climb. Later, a light rain will fall during the running leg, a welcome relief after a 1.2-mile swim and 56-mile bike ride.

Once the last wave of swimmers has entered the water, Ryan endures his tensest moments of the weekend. In his trailer his radio is hopping with questions from the course, reports of where the top athletes are, and the myriad mini-crisis inherent in any large endurance event. His mind, however, is focused on the reports from the water.

“The biggest thing on my mind today is safely getting through the swim leg and getting everyone out of the water,” Ryan says. “It’s the most dangerous in a number of ways – there’s lightening, possibility of a heart attack, so many things can go wrong.”

“What?!” Ryan says into his radio, alarmed by the miscount.

Later Ryan explains what he’s thinking at this moment.

“We can control where swimmers go in,” Ryan says, “but the trouble is where they come out. If they can’t do it, some will turn back, some will wade ashore, and some will climb up the pier. So it’s really important that we intercept them and get that timing chip. We’re not trying to be mean or say you can’t finish, but it’s the only way we can control the inventory of swimmers.”

When that inventory is off, Ryan must get a report on which bib numbers haven’t exited the water yet. Then he checks with staff at the bike corral to see if the bike for that bib number is still in the corral. If the bike is gone, then it means the swimmer’s timing chip almost certainly fell off in the bay. If the bike is still in the corral, the Missing Swimmer Action Plan goes into effect, with dive and rescue teams sent into a frantic search for the swimmer.

“At that point we’re going to assume there’s a swimmer under water,” he says.

Most of the serious injuries in triathlons occur in the water, Ryan explains, but those injuries are usually a heart attack from a weak or enlarged heart that a participant isn’t aware of. There are Coast Guard and local rescue teams swarming the bay, but rescuing a heart attack victim in water is an iffy proposition.

“We don’t have perfectly clear water,” he explains. “If someone goes under it could be tough to find them.” 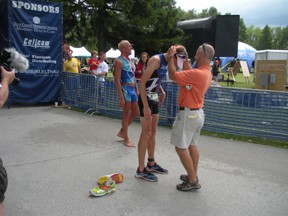 Ryan at the finish line, another race complete without a hitch. Photo by Myles Dannhausen Jr.

Fortunately, the worst-case scenario doesn’t come into play today. The report is clarified. There are 861 out, with two people pulled out, and one still swimming. Once the final swimmer exits the water and the numbers are confirmed, Ryan can give the okay for the all-clear signal, a three-horn blast from the beach that tells all the rescue personnel and staff that the most dangerous hurdle has been cleared.

Of the 864 participants who enter the water in the Half Iron event today, fewer than a handful are pulled out early. None of them need further medical attention. The day’s most serious emergency is, indeed, a heart attack, but it is suffered by a spectator, not an athlete.

With the swim leg complete Ryan is relieved. We leave the trailer and he consults with volunteer coordinator Jody Weyers and his personal secretary Jeff Poppele. Now he just has a 56-mile bike leg and a grueling 13.1-mile run to worry about.