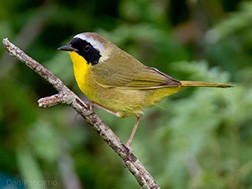 Until recently, I looked forward to a “good warbler year” – a year when the tiny migrating birds are easy to see because they arrive before trees have leaves or stay around for days trying to find enough caterpillars to fuel their journey north.

Truth is, a so-called “good warbler year” is bad for birds.

Understand that warblers fly south each winter because insects become unavailable. But in their winter ranges, there is not enough food to feed resident birds, migrants and all of their offspring. So, though the trip is excruciating, migration has survival value.

Many of the warblers we see in Door County are heading farther north, but some nest here.

Arrival time is critical. Every year, a few individual birds leave their wintering grounds early, some leave late, but most warblers instinctively time their departure from Central and South America so their arrival will coincide with leaf-out, when trees are crawling with caterpillars.

Early birds often get caught in inclement weather or arrive before the spring emergence of insects. The birds that migrate late miss the hatch and by the time they get here, most of the acceptable nesting sites and available mates are already taken.

When the migration coincides with the caterpillar hatch, warblers find enough food to either fly on or to build their nests and feed their young. It is not a coincidence that migration and the availability of food coincide. If birds instinctively leave their wintering grounds at the right time, they will successfully raise offspring that also will instinctively depart at the right time.

Bird migration is triggered by hours of sunlight, but insects emerge at a certain temperature. So what happens when spring comes early (if bird migration is no longer synchronized with food availability) like the premature spring we experienced in 2012? That year, insects hatched and had flown away long before the migrating birds arrived. And without the migrating birds to hold the caterpillar populations in check, trees suffered significant leaf damage.

Across the globe, scientists have documented that springs are coming earlier. Some bird species seem to be responding to climate change by migrating earlier. Other birds are not changing their migration timing, but rather, are flying farther north to find food and to nest.

As we watch the Door Peninsula green up, we assume that birds will be fine. But warblers need more than lush green. They need caterpillars. Moths and butterflies are very specific when choosing the trees on which to lay their eggs. Most native insects lay eggs only on native trees.

When we replace our native forests with landscapes full of plants from other parts of the world, we are hastening the decline of our migrating birds.

When planting a tree, please select a native species instead of a non-native ornamental. Native trees tend to leaf out at just the time the warblers arrive, and they are hosts for the caterpillars these birds need.

In a true “good warbler year,” it is almost impossible to see these colorful birds because they are frantically feeding on the caterpillars among the leaves of native trees.