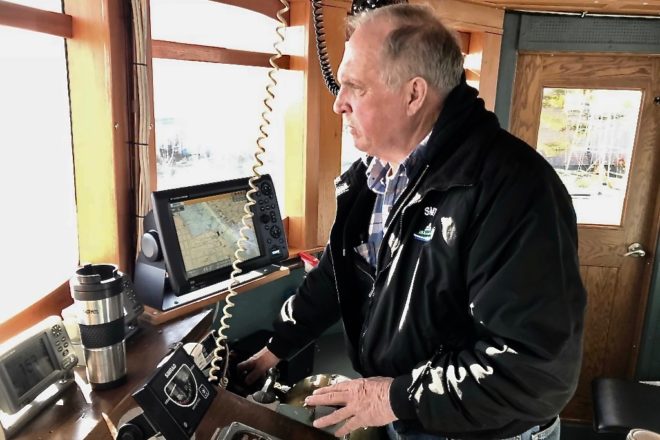 Don Sarter at the helm of one of his tugs. Submitted.

Donald Sarter, the owner of Sarter Marine Towing in Sturgeon Bay, died Monday in an accident in the waters of Lake Superior near Duluth. The company confirmed his death on the company Facebook page Monday night.

“It is with a heavy heart that we ring 8 bells for our owner Don Sarter,” the post said. “You were loved and will be missed by many.”

The ringing of eight bells traditionally marks the end of a four-hour shift on a boat, and it is also used to honor a dead sailor at the “end of the watch.”

The Duluth Fire Department responded to a report of a capsized boat in Lake Superior Monday at 11:02 am. Sarter and two other men had gone into the water. The other two men – Donald Slater of Sault Ste. Marie, Michigan, and Randall Corsten of New Franken, Wisconsin – swam to shore and called 911, but responders were unable to revive Sarter after pulling him from the water.

McDougall said a large wave came up behind the 19-foot, aluminum-hulled MonArk boat. Then another crashed over the top and swamped the motor, overturning the boat as it was performing work for Roen Salvage Company. All three men were wearing life jackets but did not have them zipped.

Sarter, 68, spent 47 years working as a tugboat captain for Roen Salvage. He and his wife, Julie, bought Selvick Marine in July after being co-owners with Sharon and Susan Selvick since 2014. The company owns five green tugboats that operate on the waters of Lake Michigan to provide towing services, ship docking and ice breaking.

His daughter, Tammy Sarter-Zeigle, said her father loved what he did.

“He loved being on the water,” she said. “He always said that if you love what you do, then you never have to go to work.”

“He was involved in the Door County Maritime Museum and took great pride in being a part of the maritime tradition of Sturgeon Bay,” she said. “He was skilled at what he did and well-respected.”

He bought Selvick Marine as his retirement plan, aiming to pass it on to his son, who will retire from the military in four years.

Sarter-Zeigle said the family and staff will continue to operate the business as is. “Everybody will go to work,” she said.