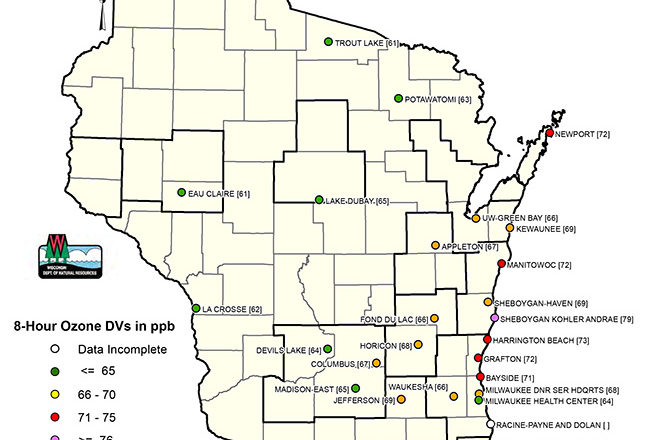 As Newport State Park survives as one of the most untouched state lands preparing to open its internationally significant dark skies to the world, it is also the location of a rather troublesome air quality monitor.

The Environmental Protection Agency (EPA) sets the National Ambient Air Quality Standard (NAAQS) and, after changes made in 2015, Door County falls under the category of nonattainment for ozone pollution. But data suggest that it’s not Newport teeming with power plants, industrial facilities and vehicle exhaust. Instead, like an unwanted tourist, ozone pollution created in Chicago rolls up the Lake Michigan coast, polluting Wisconsin in its wake.

The NAAQS is part of the Clean Air Act and it sets standards for a host of air pollutants. One of those, ground-level ozone, has gotten stricter over the years and, with the newest rule implemented in 2015, pushed many areas into nonattainment.

Nonattainment is an EPA designation that requires a state to submit a plan to clean up its air. If a state doesn’t submit that plan, it could lose federal funding for transportation projects.

On Oct. 26, 2015, the EPA published its revised rule on ozone standards, lowering the cap to 70 parts per billion (ppb). In 1979, that standard was 120ppm and it has decreased since then. In 2008, the standard was 75ppm. Door County’s monitor in Newport State Park registers around 73 ppm, so when the standard was changed in 2015, Door County fell into nonattainment.

“This isn’t our first go around,” said Grant Thomas, corporation counsel for the county. “We’ve been through this before and have achieved decent results. The 2015 ozone now is 70 ppb and based on the readings at the Newport station between 2014-2016, it looks as if we’re going to be in nonattainment.”

Nearly every county along the Lake Michigan shore is in nonattainment, with the monitor in Kohler-Andrae State Park near Sheboygan frequently registering the worst ozone pollution levels in the state.

The EPA has stated they will likely administer nonattainment standards in 2017 after gathering data from the past two years. Wisconsin is grappling with the clean air plan mandate and threat of sanctions while recognizing that the problem stems from its neighbors to the south.

In March 2015, the Wisconsin Department of Natural Resources submitted comments to the EPA during their public comment period, expressing opposition based on the location of pollution emission.

“Wisconsin’s most significant ozone problems occur along the Lake Michigan shoreline due to transport along the lake from Chicago and other areas to the south,” said the submitted comments.

A 1998 study from Purdue University confirms this.

“Morning ‘rush hour’ emissions in major cities such as Chicago, Gary and Milwaukee, are carried offshore by the prevailing winds… where they concentrate in a shallow layer and react in the presence of sunlight to form ozone,” said the study. “As a result, the highest ozone levels occur not in the major source regions, but farther downwind in eastern Wisconsin and western Michigan.”

“The broad-based rationale is that there really aren’t any major sources in Door County,” said Thomas. “There’s probably not anything we can do within Door County that’s going to positively impact the reading at the monitor.”

“How do you take a tourist that is coming to Door County and is concerned about their health issues and explain this whole story?” said Lienau, citing the effect a water contamination story called “Poison in Paradise” had on the county when it was printed in the Milwaukee Journal in 1971. “The last thing I would like to do is see them carve out an area that says northern Door County is in this nonattainment area and let all the papers and media and television stations go crazy about poison in paradise.”

Thomas said county officials have met with the DNR in the past few months and will meet with the EPA before the agency makes its final determination on nonattainment areas in June.

“The approach we’ve taken with the EPA and DNR is Door County would step up and assume responsibility for sources that originate in Door County, but we can’t reduce emissions when there’s no sources of significance in Door County,” said Thomas.

Should the county be unsuccessful in getting all of Door County removed from the nonattainment list, Thomas said the county may seek a narrowly tailored nonattainment area restricted to the location of the monitor at Newport. Other counties, such as Sheboygan, have purchased additional monitors and placed them inland, where readings are compliant with EPA standards.