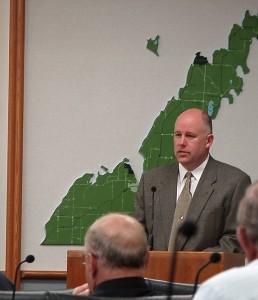 Ken Pabich addresses the Door County Board of Supervisors after being voted in as the new county administrator.

Ken Pabich (pronounced Pabick) may be the new guy in Door County government, but he is no newcomer to Door County.

“Our family has been coming here for years, probably 25 years as a family, and my wife [Stephanie] even longer than that,” Pabich said during a break in the June 23 Door County Board of Supervisors meeting where Pabich was unanimously approved as the new county administrator.

“Our long-term goal was potentially retiring up here,” Pabich said, adding that he has a place at Heritage Lake Resort in Egg Harbor, but is looking for a home in Sturgeon Bay.

“The family is excited but they’re nervous,” Pabich said. “We have kids 15 and 11. They’re a little bit worried about the transition to school, but we got the process started, and we’ve been bringing them up here so that will help with the transition.”

Pabich will finish up his duties as director of planning and economic development in De Pere and assume his new position with Door County on Monday, Aug. 3.

“De Pere is a beautiful community, but this is an opportunity I couldn’t pass up,” Pabich said.

Pabich has served the city of De Pere since Jan. 2007. Before that he spent 7½ years in the Calumet County Planning Department, the last 2¾ years of that as director of the Planning, Zoning and Land Information Dept.

“I’ve done a lot of work already, trying to understand the county, reading the papers, following the trends that are going on,” he said. “We have a couple of big projects in the works and in the middle of the budget process, so I’ll be diving into those things head first.”