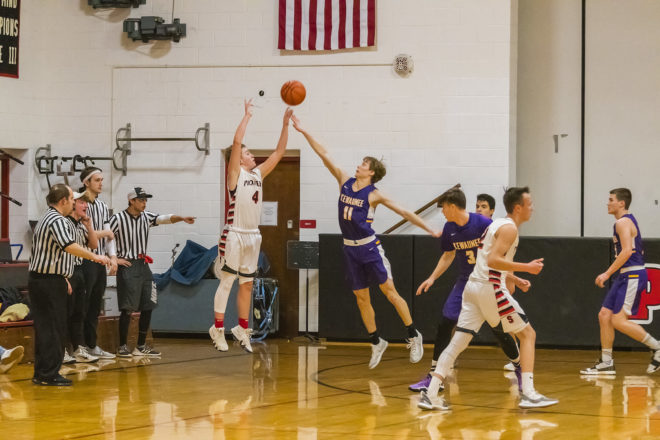 Wisconsin has a dwindling pool of young officials for youth sports, in part because young officials don’t want to deal with unruly parents and fans in the stands. Photo by Len Villano.

“I don’t listen to the fans and coaches,” said Schartner, a Sturgeon Bay resident who has officiated football, basketball and baseball for 33 years. “The bottom line is that I am there for the players and try to be as insignificant as possible.”

Shartner’s response about ignoring the words and behavior of fans and coaches is atypical, according to a recent survey of nearly 17,500 sports officials conducted by the Racine-based National Association of Sports Officials (NASO). The survey found that 80 percent of officials leave the profession within the first three years, and three quarters of those respondents cite parent and coach behavior as the top reason for their departure.

This reality has put a strain on the number of officials nationwide. Representatives of the Wisconsin Interscholastic Athletic Association and the National Federation of High School Associations cowrote an op-ed that provided some startling data.

According to the article, 47 percent of referees in the NASO survey said they have experienced fear for their safety due to poor fan interactions, and 57 percent have had to quell a physical altercation during a game. The cumulative effect is that the average age of officials entering the profession is now 42 years old, up from 20 in 1972.

“I usually have my officials [chosen] a year in advance,” she said. “Every once in a while I need officials, and thank God that it always works out. It is not always easy.”

Tanck blames this parental and coaching behavior for increased negative interactions between young players and officials: the kids are emulating what they see from the adults.

“It is tough and challenging to be an official,” Tanck said. “At that level, it should be a fundamental game and not as much of a competition. However, when you have a clock and a score, everything changes.”

Algoma resident Kelly Koss, a 41-year veteran of football and basketball officiating, said Door County hasn’t experienced the kind of exodus of officials cited in the NASO survey. He added that, like Schartner, many of his colleagues in the area are veteran officials, a status that serves them well.

“I can see how [fan and coach behavior] can affect younger officials,” Koss said. “I don’t know someone who quit because of it, but that doesn’t mean it doesn’t happen or that it hasn’t gotten worse. Maybe we are isolated in Door County. The more experience you get, the thicker your skin gets. One bad apple in the crowd can get 20 or 30 more fans going. I just chuckle under my breath. I’m six feet from the action, and they are 72 feet away but can see the play better?”

Koss said the part of the NASO survey that reflects Door County is the advanced age at which officials begin their careers. He added that younger people have so many more options for their free time than he did when he began officiating.

Most referees have 9-to-5 jobs, so officiating a game often means traveling some distance and missing nights with family. This has led to a large group who likely won’t be working in the near future.

“The vast majority of officials in Door County are getting old,” Koss said. “I haven’t worked with one official who is under 30 in a long time.”

Shartner said there is no easy solution to the lack of young officials in the county. He’s been working with a few new officials who are improving with each game, but they still lack the confidence needed to compare to their seasoned colleagues. In a recent game he said a new colleague blew his whistle only twice due to fear of getting a call wrong.

“It’s just a matter of finding the right kids,” Schartner said. “You gotta want to ref. You gotta have it in your heart.