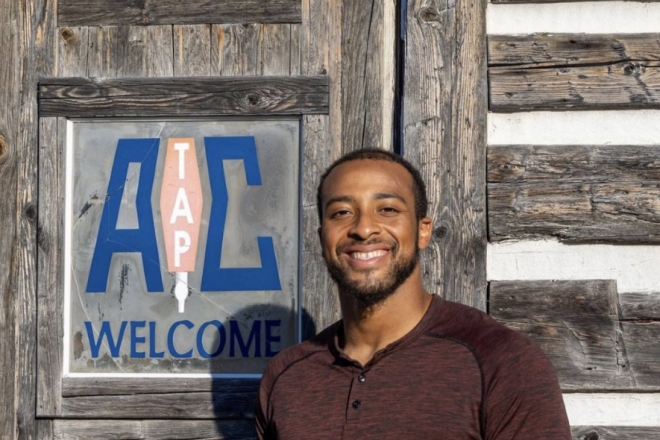 First he tweeted about his love of the AC Tap’s chicken wings. Then he posted a video to Twitter of his time on stage with Unity at Husby’s Garage Bar. And in July, he told reporters he hoped to become mayor of Door County one day.

By the time training camp had ended, second-year Green Bay Packers running back AJ Dillon (@ajdillon7) had become an unofficial ambassador for the Door peninsula, sporting T-shirts from local restaurants on his way to practice and during press conferences.

So how does a 23-year-old budding NFL star whose only previous knowledge of Wisconsin was that the Badgers play here find himself enamored with Door County?

“My now-fiancée actually introduced me to Door County,” Dillon said. “Her family has a place in Egg Harbor. We went up there last summer, and I really enjoyed it, and this year we’ve consistently gone up there and had great memories.”

A small-town vacation destination isn’t what a lot of young athletes are looking for when they hit the big time, but Dillon said he feels at home in northeastern Wisconsin.

“There’s not much of the city life in Green Bay or Door County, but if you can appreciate what Door County and what Green Bay does have to offer, that’s where you can start having great experiences,” he said. “I’m a family guy, and I’ve always thrived in a family atmosphere where the community’s all together, and that’s what we have here in Green Bay, and obviously in Door County with all those small towns – Egg Harbor, Fish Creek, Sister Bay, Ephraim.”

Though Door County has long had a reputation as a retirement destination, Dillon said he’s found a new side of the peninsula.

“It’s maybe not known as a place for younger people, but summertime up there is awesome,” he said. “You can go to Husby’s, go to [the] Bayside, and there’s so much to do.”

But he also finds visiting the county to be a great way to get away and relax, which might be reflected in his play as he’s growing more comfortable during his sophomore season.

Dillon has found an increased role in the Packers’ offense, seeing his carries increase as the backup to star tailback Aaron Jones. Dillon has rushed for 225 yards and averaged an impressive 4.6 yards per carry through the first six games after rushing for 242 yards total in 2020.

He said his growth as a player coincides with a growth in confidence.

“I’ve started to get more opportunities,” Dillon said. “And I really felt that in the NFC Championship game – though it didn’t end the way we wanted it to – that’s the game where I really felt confident and felt like I really knew what I was doing. Like I know this play, I know what I should be looking for here. When that happens, it really helps you calm down.”

With his football success, Dillon has put his mayoral hopes on the back burner.

“I realize being mayor is an actual political position, so that one might be hard to do,” he said. That, and there isn’t an actual position of mayor for a county. “But I could be honorary mayor or ambassador, or just get a really big key and wear it around everywhere: the key to the county.”

He said fans have given the idea support on social media and even offered a slogan: “Dillon for Door.”

He’s not the first Packers notable to fall for Door County. Former team president Bob Harlan and his son, announcer Kevin Harlan, have long been part-time residents. Coaches Mike Sherman and Mike McCarthy both spent time on the peninsula, and even team founder Curly Lambeau had a cottage on Cottage Row and died in Sturgeon Bay.

Showing the county so much love will certainly help Dillon get his wish to receive a key to the Door, but his best path to the key is on the field.