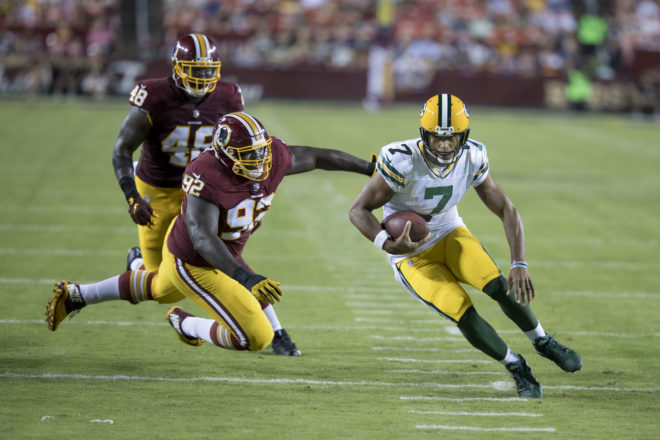 Quarterback Brett Hundley of the Green Bay Packers runs against the Washington Redskins during a preseason game at FedExField on August 19, 2017 in Landover, Maryland.

While Green Bay looks to recover from their 23-10 loss to the Minnesota Vikings, newly promoted quarterback Brett Hundley will lead the Packers’ offense as they prepare to host the New Orleans Saints at noon on Sunday.

Hundley stepped in for the injured Aaron Rodgers last Sunday, who left the game in the first quarter due to a broken right collarbone, likely meaning the end of his season.

The Vikings, who have been dealing with quarterback injuries of their own, capitalized on Rodgers’ departure on their way to a seemingly easy victory over the Packers. Minnesota won with quarterback Case Keenum, who has played exceptionally well in the absence of quarterbacks Sam Bradford and Teddy Bridgewater, leading the Vikings to their second consecutive win.

The Vikings have also dealt with losing rookie running back sensation Dalvin Cook, who tore his ACL in his fourth game of the season, while ranking in the top three rushers in the league.

In addition to Cook, Rodgers joins the ever-growing list of NFL stars whose seasons came to an abrupt end during the first half of the 2017 season.

In Week 5, Giants standout receiver Odell Beckham Jr. suffered a fractured ankle and Texans’ defensive end J.J. Watt left with a tibial plateau fracture. Julian Edelman, Tom Brady’s go-to target in New England, tore his ACL in the preseason. All of them will watch the remaining games of the season from their respective sidelines.

Hundley will be just the sixth different starting quarterback for Green Bay since Brett Favre took over for the injured Don Majkowski in 1992. Brett Favre’s ironman streak of 253 consecutive regular season starts at quarterback for the Packers (1992-2007) led way to Rodgers starting 141 of the next 150 regular season games for Green Bay. Aside from Favre and Rodgers, Matt Flynn (6), Scott Tolzien (2) and Seneca Wallace (1) have been the only other quarterbacks to start for the Packers in the last 25 years.

Hundley, in his third season with the Packers, will look to take advantage of his newfound opportunity. His career stat line, 47.7 percent completion rate, one touchdown, four interceptions, and a quarterback rating of 28.0, does not speak to his abilities when given time to prepare. Much is left to be seen this Sunday with a full week of preparation for Hundley and the Packers offense.

Sitting atop the NFC North with the Vikings, Green Bay does not face an incredibly difficult schedule in the remaining 10 games of the season. In fact, the combined record of Green Bay’s remaining opponents is 28-30 (including playing Detroit, 3-3, twice). Winning half of those games would put Green Bay at 9-7, perhaps on the edge of a playoff berth. If Hundley can put together a winning record as a starter, Green Bay’s redesigned offense may have enough weapons to make them a viable contender in the NFC.

Sunday’s contest against New Orleans will give many a preview of Hundley’s ability and coach Mike McCarthy’s new offensive strategy.

The Saints are coming off of a 52-38 win over the Detroit Lions, their third straight. Unfortunately for Green Bay’s offense, the Saint’s defense has recently found their rhythm.

Despite giving up 38 points to Detroit, 14 of those points were scored on both a punt return and interception return for touchdowns. While giving up 24 points to the Lions offense, the Saints’ defense forced five turnovers, scoring three touchdowns off of those turnovers. Additionally, they recorded five sacks and 16 batted passes.

Looking ahead to Sunday’s matchup, expect creativity out of the Green Bay offense and a clearer picture of what the remainder of this season holds for the Packers’ faithful.