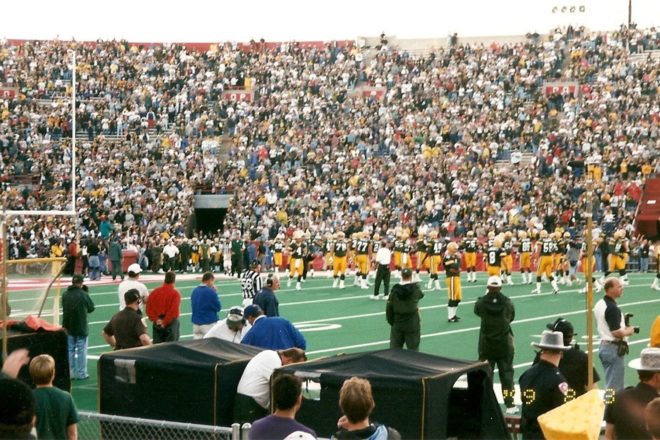 The Packers beat the Denver Broncos, 27-12, at Camp Randall Stadium during their last undefeated preseason in 1999. Public domain photo.

Mike McCarthy has wrapped up his 11th preseason as the head coach of the Green Bay Packers. Since his inaugural season as the leader of the Packers in 2006, his team has never finished its preseason without a loss.

As Green Bay finished its preseason schedule with back-to-back road games, the Packers took to Kansas City on Thursday night with a chance to go 4-0 in their exhibition matches. This would be a first for McCarthy in his tenure with Green Bay.

As unusual of a start to the preseason as it was, with the cancellation of the Pro Football Hall of Fame Game on Aug. 7 due to improper field conditions, Green Bay had the opportunity to do something it has not done this century; to finish the preseason undefeated.

It has been 17 years since the Packers did so. The year was 1999 and the Packers had recently bid farewell to the man who helped to bring winning back to Green Bay. Former head coach Mike Holmgren departed for Seattle where he assumed the role of executive vice president, general manager and head coach of the Seattle Seahawks. In short, he was in charge of all football operations in Seattle.

His successor was Ray Rhodes, who was relieved of his duties as head coach of the Philadelphia Eagles after the 1998 season, where he served for four seasons before being hired by Green Bay in 1999.

Green Bay was just two years removed from back-to-back Super Bowl appearances. Packer fans were looking to recover not only from the absence of their head coach but from the painful playoff loss against the San Francisco 49ers the year before. Most remember a young Terrell Owens that hauled in a game-winning touchdown with three seconds left to send the Packers home in the NFC wild-card game. Some may remember Jerry Rice’s fumble on the same drive, incorrectly ruled “down by contact” that allowed the 49ers the opportunity to continue their drive and get the eventual win.

Most Packer fans remember how Rhodes finished, but not how he started. Prior to his lone season as Green Bay’s head coach, Rhodes and his Packers team finished the preseason with an undefeated 4-0 record. His early success in the preseason, which counted for nothing aside from giving fans hope and promise for a strong regular season, did not carry over as planned.

Although the Packers began the 1999 regular season with a 3-1 record, a pair of three-game losing streaks and stumbles along the way eventually led to the team finishing with a mediocre 8-8 record. Rhodes was released following his first and only season as head coach and replaced by Mike Sherman.

Two years prior to Rhodes’ season, the Packers went 5-0 in their preseason games in 1997, when they eventually lost to the Denver Broncos in Super Bowl XXXII, following a 13-3 regular season record.

In fact, the Packers have gone undefeated in the preseason a total of 10 times in team history. Three of those seasons ended with championships; back-to-back NFL championships in ’61 and ’62 along with ’67, which ended in a Super Bowl I victory.

Most will agree there is no definite correlation between a team’s success in the preseason translating into success in the regular season. Case in point, the 2008 Detroit Lions finished their preseason undefeated with a 4-0 record. Five months later, that same team became notorious for becoming the first and only NFL team to date to lose all 16 regular season games.

However, three years later, the 2011 Detroit Lions also finished their preseason with a 4-0 record. Their regular season was significantly stronger where they finished with a 10-6 record and a playoff berth.

Whether the Packers finished with a 4-0 or 3-1 preseason record this preseason, it’s safe to say there is no certainty on the outcome of the 2016 season, other than the positive feelings that winning brings. Although preseason games do not count toward the regular season records, they are not meaningless, especially to those players proving their worth and trying to make the 53-man roster.

Justin Skiba is a local educator and former high school football coach. He lives in Sturgeon Bay, with his wife, Stephanie, and daughter, Delaney. Justin has a strong interest in history and sports. He is fascinated with Terrence Malick’s The Tree of Life, as it reminds him to always notice the glory around us.