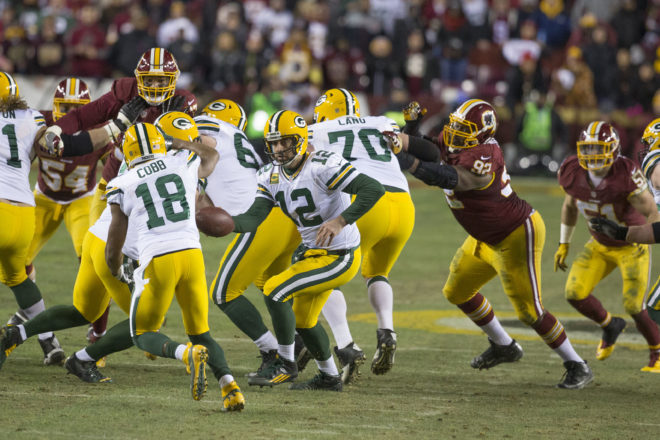 This weekend, NBC’s Sunday Night Football will feature the Washington Redskins (5-3-1) hosting the Green Bay Packers (4-5) in a primetime matchup. The Packers are looking to snap a three-game losing streak while the Redskins continue to chase the NFC East, leading Dallas Cowboys in an effort to remain in the playoff hunt. Sunday night’s contest between the Packers and Redskins may remind football fans of a memorable Monday Night Football match between these two teams 33 years ago.

The 1983 NFL season was one of promise for the Washington Redskins, who were attempting to defend their Super Bowl XVII title that came against the Miami Dolphins at the conclusion of the 1982 season. After a 5-1 start, the Redskins were slated to visit the 3-3 Green Bay Packers on Monday Night Football. The results of this game came as a surprise to most football fans.

In his final season as head coach of the Packers, Bart Starr was aware of the capabilities of the powerhouse Redskins team. Led by the soon-to-be 1983 NFL MVP in quarterback Joe Theismann, the Redskins complimented their passing game behind running back John Riggins, who finished the season as a top-five rusher and led the league with 24 touchdowns.

Defensively, the Redskins featured safety Mark Murphy, who would go on to lead the league in interceptions with nine and earn a Pro Bowl nod. Murphy now serves as the President and CEO of the Green Bay Packers, a position he has held since 2007.

Quarterback Lynn Dickey, wearing #12, led the 1983 Packers. He went on to lead the NFL in passing yards (4,458), touchdowns (32), and interceptions (29) that season. His passing yards during the ‘83 season stood as a team record until 2011, when broken by the Packers current #12, Aaron Rodgers. Dickey had reliable receivers in fellow Pro Bowlers James Lofton and Paul Coffman.

Green Bay’s rushing game was average, while their defense ranked as one of the worst in the league.

The outcome of the 1983 classic was a 48-47 Green Bay victory. The Packers and Redskins combined for 95 points, the most ever scored on Monday Night Football. Dickey finished the game completing 22 of 30 passes for 387 yards and three touchdowns. Theismann’s numbers were equally impressive as he finished the game 27 of 39, 398 yards, and two touchdowns.

With both offenses finding success, each team only punted once and combined for 11 extra points and six field goals. It was a night of offensive fireworks. Even in today’s NFL, where a 300-yard passing game is considered a norm, these numbers would stand out.

Green Bay gave Washington one of only two losses on the season. Both losses came by a single point. Washington went on to win their second straight NFC Championship and a berth to Super Bowl XVIII. They would lose to the Miami Dolphins, 38-9.

Green Bay finished the season with an 8-8 regular season record. Despite a mediocre finish, Green Bay’s season included an NFL record five overtime games (Green Bay won two), and a record for most points in one half (49 points in a 55-13 win over Tampa Bay).

A game of this caliber would certainly be a spark for today’s Packers, who are trying to revitalize their team.

Justin Skiba is a local educator and former high school football coach. He lives in Sturgeon Bay, Wis. with his wife, Stephanie, and daughter, Delaney. Justin has a strong interest in history and sports.