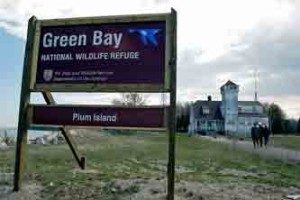 Crossing Death’s Door used to be a task for only the bravest of ship captains. The Porte des Morts is believed to harbor more shipwrecks than any section of fresh water in the world. But each year, a group of paddlers takes to the passage. Some are dressed in Viking costumes, others look like pirates and some brandish state-of-the-art kayaks and paddles.

Death’s Door Paddlefest, formerly known as the Washington Island Canoe and Kayak Event, will take place July 10, 11 and 12. The weekend is capped off with the four-mile expedition crossing Death’s Door.

“I would call it the Everest of Door County, making that passage self-propelled,” said Valerie Fons, director for the event. Fons paddled more than 30,000 miles in locations around the world before settling in her family’s house on Washington Island. With the fierce history of Death’s Door on her front steps, the idea for the expedition event came from a personal wish to challenge the passage herself.

“I wanted to cross Death’s Door myself and I didn’t want to go alone,” said Fons. “Lots of people cross there on the ferry and the idea of crossing a legendary passage on a small boat, it makes sense that one would go with the support of the crowd.”

This year, the expedition will stop at Plum Island and feature a talk from Tim Sweet, president of the Friends of Plum and Pilot Islands. Sweet will speak on the history of the islands and their preservation efforts moving forward, including the national significance as a bird sanctuary.

Throughout most of the 20th century, Plum and Pilot Island had lighthouse facilities that were manned by the U.S. Coast Guard. When automated lights replaced the range lights in 1969, the Coast Guard no longer needed employees living on the islands full time.

During the next 40 years, the lack of activity on the islands allowed for native vegetation and wildlife to return. In 2007, the Coast Guard gave control of the islands to the U.S. Fish and Wildlife Service and they were added to the Green Bay National Wildlife Refuge.

The stopover of the crossing expedition marks another important step in the goal of recognizing the importance of these islands. The Friends of Plum and Pilot Islands have worked with the U.S. Fish and Wildlife Service to open the islands up to kayakers and paddlers looking to explore the islands. Previously, the buildings and the grounds were closed to visitors.

“We’ve always just gone past the island in our crossings, trying to avoid the shallows on the corner of the island,” said Fons. “Because we have the permission now with Fish and Wildlife for kayakers and paddlers to land, that’s a key part of it.”

Fons admits that in her miles of paddling, completing a crossing was never broken up.

“When you make the choice to make the crossing from one point to another, you don’t pause. You keep going until you get to the other side,” said Fons. “We’re stopping at Plum and it will certainly be well worth it to put feet on the ground there, legally, with the invitation to learn about the history of those places.”