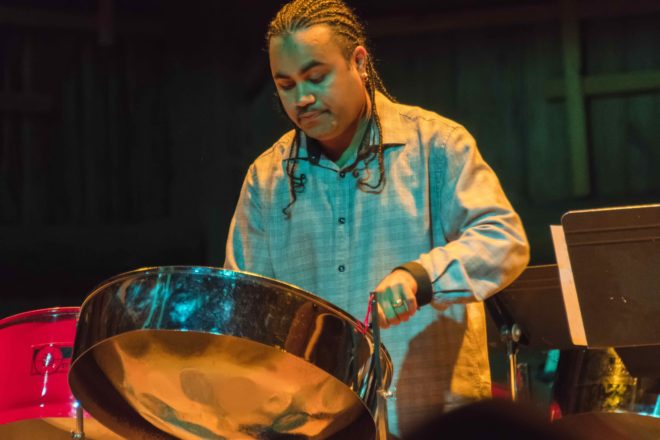 On June 22, 2017, the two-week percussion and steel band session at Birch Creek in Egg Harbor had been underway for four days. The first performance of the session was that evening. It was a faculty showcase that demonstrated both the ingenuity and talent of the instructors. One of the evening’s highlights was Liam Teague’s performance on the steelpan. Teague, the program’s steel band director, holds one of the longest tenures at Birch Creek, with 2018 marking his 23rd season.

“A lot of people are remotely familiar with [the instrument], though most know the steelpan as a steel drum,” Teague said. “However, most people are not knowledgeable about the musical possibilities of the instrument. There’s the Hawaiian and tropical sound, which is all well and good, but I always want to show its versatility and consistently highlight the instrument’s profundity.”

The name “steel drum” is somewhat of a misnomer, since it is not a drum in the technical sense of the word — the entire instrument vibrates, rather than simply a membrane. The name comes from the objects from which the instrument was originally made — 55-gallon industrial drums. Now, most professional-grade steelpans are made using sheet metal rather than recycled oil or chemical barrels. The bowl of the pan is molded so that, when hit with rubber-tipped sticks, they resonate with a sound that is clear and metallic, bright and sparkling.

That evening at Birch Creek, the award-winning Teague made his first appearance onstage about halfway through the evening’s performances, playing lead steelpan to “Pan in A Minor.” 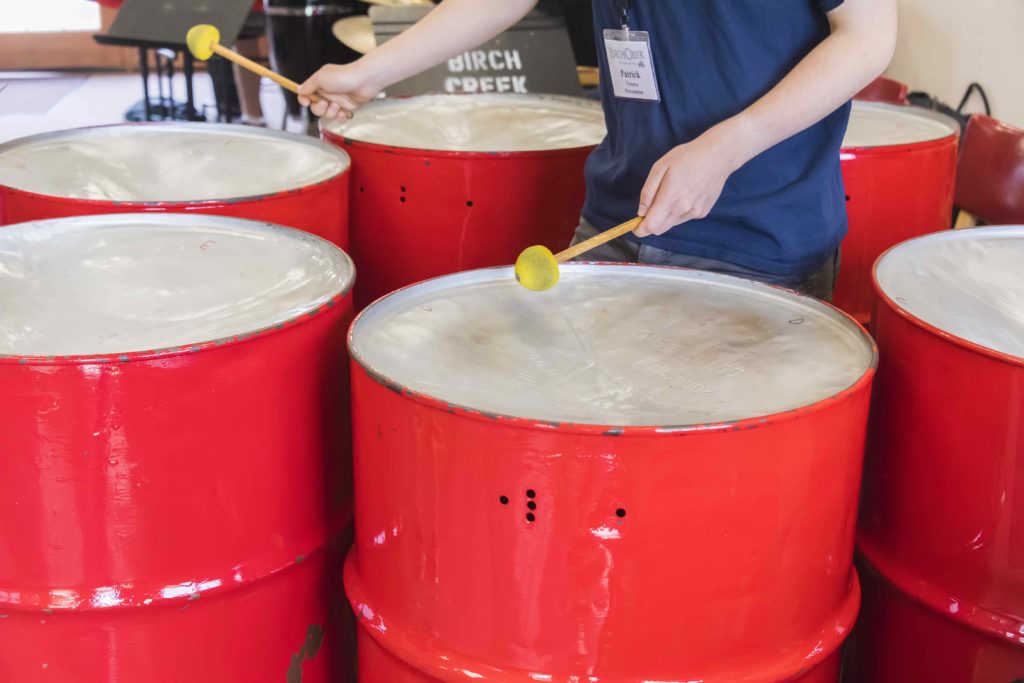 Written by Trinidadian calypsonian Lord Kitchener, the six-and-a-half-minute piece is fast-paced and full of movement. The first measures he played alone, a solo whose notes created an air of mystery, and was almost hypnotic in effect. Teague ran up and down the scales and across the instrument’s surface with movements both rapid and precise. Every note cut clearly through despite the fast pace of the music. It is this unparalleled mastery for which he is known as the “Paganini of the Steelpan.”

His first performance complete, he went on to describe his next piece: “This song was written by my mother’s favorite composer — me.” He grinned as the audience laughed. “Trying ah Ting” starts off slowly, calling to mind a calm and untroubled day in the Caribbean. Accompanied by congas, the tempo increases, all the while interweaving an intricate yet easily recognizable melody. The song is joyous, and the audience is once again captivated by Teague, who smiles as he plays.

Teague hails from Trinidad and Tobago, where the steelpan is the national instrument. He first started playing the steelpan at 11 years old, but began intensive study of the instrument when he moved to the United States at the age of 18. He studied music at Northern Illinois University (NIU), where he is currently head of steelpan studies and associate professor of music.

“Al O’Connor started that [steelpan] program,” Teague said. “It was the only school in the world where you could focus on steelpan as your main instrument.”

O’Connor, longtime steel band director at Birch Creek, was at that time the head of steelpan studies. As Teague explained, O’Connor played a crucial role in his musical education and his career.

“He heard me performing when I was in Trinidad as a teenager, and long story short, he made it possible for me to attend Northern Illinois University,” Teague said.

In 1989, O’Connor and Cliff Alexis, a musical instrument technician at NIU, were invited to be honorary judges for a contest for steel bands and soloists. Teague was one of the soloists and played an original piece.

“It just knocked me off my feet,” O’Connor said. “This kid was 16 years old and had technique like I’d never seen. And his music was very mature for someone that age.”

O’Connor told Teague to get in touch with him if he ever wanted to continue his music studies in higher ed. A year later, he received a letter from the young musician, and by mid-1993, Teague was starting his undergrad at NIU.

“His technique is like nothing I’ve ever heard,” O’Connor said. “Totally natural. He’s self-taught, and he taught himself to play in a way that is so much better than other performers. When I first started with him, I said, ‘I can’t teach you how to get technically better aside from a few strokes from the percussion side.’ [My instruction] was mostly about how to be a musician. He was very raw, and so it was about getting him more experience with new audiences.”

O’Connor continued to provide new audiences for Teague, bringing him even further north to Door County. At 21, Teague began playing at Birch Creek as a guest performer in the percussion ensemble and in jazz combos. He played pre-concert shows at Peninsula Players Theatre and blew audience members away. His impressive performances helped Birch Creek’s program thrive. 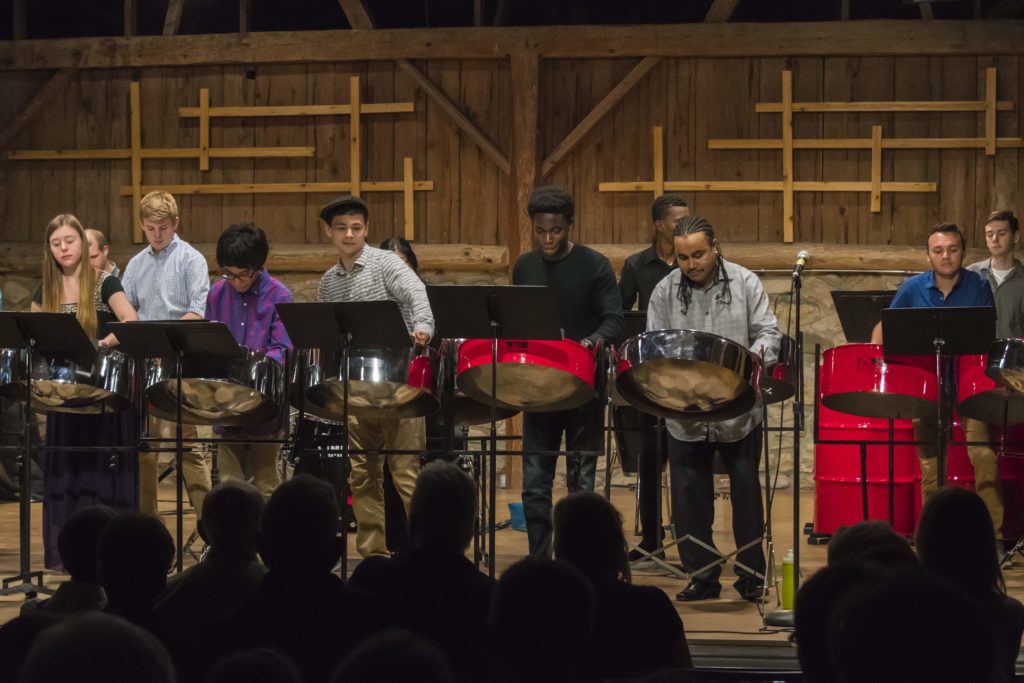 “The attendance level of the steelband program just burst through the ceiling,” O’Connor said.

After completing his master’s degree at NIU, Teague returned home to Trinidad for a few months. But in the early years of the new millennium, O’Connor began contemplating retirement from the university and invited Teague to join the faculty at his alma mater. When O’Connor retired in 2002, Teague took over as head of steelpan studies.

“I never wanted to be a teacher,” Teague said. “That was the last thing on my mind. Now, I absolutely love it. To see the development of the students and how they find happiness in the medium of music is indescribable.”

The joy Teague finds in teaching at NIU extends to his work at Birch Creek, where he has been the steel band director for the past four years. “I love working with young kids. Many of the students would never have played a steelpan before we play here,” he said.

Despite this lack of experience, students tend to pick up the instrument in short order. “The instrument is so infectious and that’s because there’s a sense of instant gratification,” Teague said. “Within a few minutes someone can play very simple tunes. There’s a certain amount of technique required to play the violin before you even begin to think about playing something such as ‘Twinkle, Twinkle, Little Star.’ And so that’s a thing that draws people to the instrument.”

Emily Koelpien, a recent graduate from Southern Door High School, attended the percussion session during the summer of 2016 and worked with Teague. Her experience was with battery percussion — snares and other drums — rather than with pitched instruments, such as the steelpan. “He sees where everyone’s strengths are, and he helps people where they need it,” she said. “He has a relaxed teaching style, which is appreciated. He lets you figure things out on your own, but he’s there if you need him.”

“He is demanding in how he wants his students to learn, but he’s not intimidating,” O’Connor said. “He doesn’t scare the daylights out of them until they hear him play!”

Some of the students, after working with Teague at Birch Creek, decide to attend NIU and be part of the program he heads.

“It’s a nice recruiting base,” he said with a laugh.

But Teague greatly appreciates working with the students who come to Birch Creek, regardless of whether they seek to pursue a career in music. To him, it’s about sharing the joy of music and art in general, and understanding how important and enriching these elements are to the world we live in.

“I helped to plant that seed in their brain to contribute to the arts in some way,” he said. “Even if they go on to become doctors or lawyers, they can still contribute, whether it’s by attending a concert or donating to a program — it all works to perpetuate a love of music.”

As he and his colleagues performed in the Dutton Concert Barn on that rainy summer evening, their own passion was met with equal enthusiasm by an audience of musicians, donors and members of the community.