Whenever I can observe and enjoy a creature whose ancestors’ fossils indicate they lived as many as 15 million years ago, it’s a red-letter day. It was a medium-size Painted Turtle, no longer than five inches, basking on a partly submerged moss-covered log that captured our attention as a friend and I waited patiently for dragonflies to appear along this quiet shore. 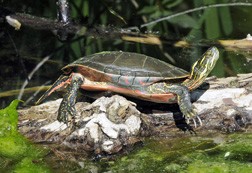 Notice the long front claws of the male Painted Turtle.

A dozen or more Chalk-fronted Corporal Dragonflies and at least one Ashy Clubtail Dragonfly, along with a few very tiny and unidentified Bluets, made up the total of Odonata (dragonflies and damselflies) seen this early July 2 morning. But the very trusting turtle, allowing us to approach it to within several feet, perfectly reflected the sublime peacefulness of the day that both of us savored.

I have learned through the years of interpreting nature with people that their general attitude towards turtles is to leave them alone. They are harmless, so slow moving that they couldn’t possibly chase after you and, other than the Snapping Turtle, couldn’t ever pose as a threat. Even though their appearance on the scene often comes as a surprise, they rarely frighten people, as do snakes.

I’ll always remember the Painted Turtle incident Charlotte and I witnessed at the Ridges Sanctuary many years ago. I had just finished the day on the trails and was on my way from the nature center back to the Rangelight residence. Right along the hard-packed sandy path was a female Painted Turtle, about six inches long. Her back end was lowered slightly into the pit she had dug, where she was in the process of depositing her eggs. 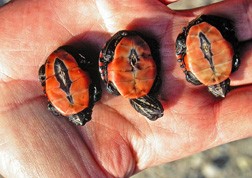 I was back home in less than a minute, shouted to Charlotte to get her camera too, and we both ran back to the scene of action. Unfortunately, the mama turtle was already about 10 feet away from her nest, having covered it with sand, and was heading for the little Tag Alder swamp next to the highway.

At least we could get some pictures of her, as I cautiously picked up the little mother and brought her back to the trail. The instant I held her over the nest she released a stream of very clear water. Instinctively I trained the dribble of liquid onto the nest. Later, while reading about her kind, I learned that many turtles possess cloacal bladders, which help them to store water especially for use during periods of drought. Females use this water supply to soften the ground in which they will deposit their precious eggs.

The little gal’s smooth unkeeled upper shell, called the carapace, was a deep olive-black, edged with only a small amount of red. Undoubtedly a little scraping would have revealed more red markings, quite common to other turtles as well. The large scutes of her carapace, like tight-fitting pieces of a puzzle, were rimmed with light olive and arranged in an alternate pattern. Her bottom shell, the plastron, was a very soft shade of yellow with just a hint of a darker streak down the middle. The characteristics of her carapace and plastron told us that she was a Midland Painted Turtle, one of four subspecies in this country.

It was quite natural that this beautiful creature in my hand would pull her head and legs in as far as she could. We chuckled out loud when we saw how snugly she had forced her tail sideways against her body to hide even that. This turtle didn’t kick and struggle repeatedly with a clawing motion as others I have held in the past. In fact she was quite gentle. The manner in which her head slowly inched out of her shell indicated she, too, was curious about us.

Rarely do the females of this picturesque reptile grow to have shells longer than seven inches. Their average length is closer to five and one-half inches. Males are usually an inch shorter. An adult male can be easily identified by his unusually long front claws, which, according to the experts, he carefully brushes against her face as part of the mating act. 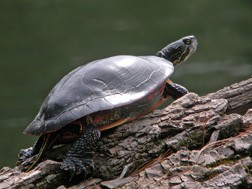 The dark carapace of this wary Painted Turtle shines in the sunlight.

Many of my summer exploratory tours in past years, especially those along Old Lime Kiln Road into the Mud Lake Wildlife Area, came upon dug-up nests and opened turtle eggs near the shoulder of the road. Some appeared to have hatched normally but most had been ripped open and the insides eaten by predators such as raccoons, skunks, foxes, opossums and especially the Thirteen-lined Ground Squirrel (gopher).

The shells, instead of being brittle like bird eggs, are flexible and rubbery to the touch. Snapping Turtle eggs, closely resembling ping-pong balls, are quite roundish. One nest may contain as many as four dozen. Eggs of the Painted Turtle are elliptical and approximately one inch by three-fourths of an inch in size. There usually will be only five to eight in a nest.

Assuming that the summer temperature and precipitation will be normal, the one-inch-long Painted Turtle hatchlings may begin to appear in early September. However, it is not uncommon for the eggs to hatch with the babies remaining in the nest until the following spring. One year we had a call in late summer from our friend Ray, who lived several hundred yards west of the north end of Kangaroo Lake, telling of a Painted Turtle laying her eggs right next to a Peony bush in his front yard – and he asked what he should do. 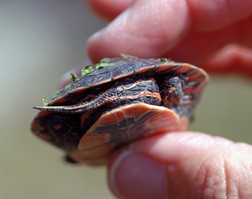 This young Painted Turtle tries to tuck in its tail while being held.

Surely those babies would not appear until the following spring, so I told Ray to construct a small chicken-wire cage over the nest in order to prevent predators from digging up the eggs. The following May on Mother’s Day, Ray called with the good news that the baby turtles were squeezing their way through the wire cage and heading for water. Within minutes Charlotte and I were admiring and photographing the little beauties, and how pleased I was that my suggestion for protecting the nest and eggs had worked.

Most of our nature-oriented friends will agree that Painted Turtles, most abundant and widespread of all turtles in North America and which occur naturally across our continent, add great interest and beauty to the secluded ponds. If people could be as peaceable and harmless in their own environment as Painted Turtles are in theirs, what a great world this would be.