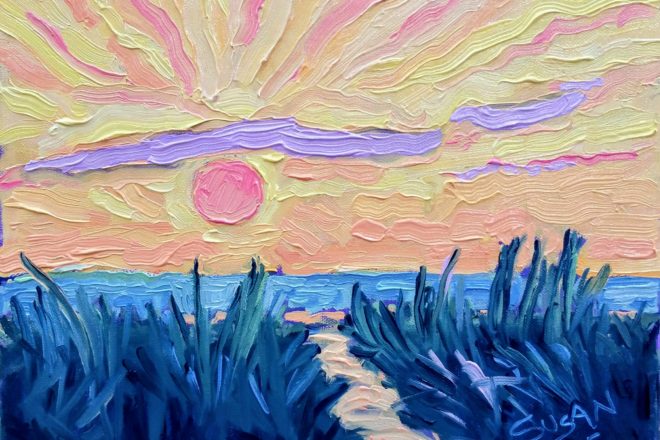 Walking through an exhibit of Susan Hale’s artwork, an overwhelming aesthetic prevails: vivid, healthy, encouraging countryside. Hale, of Cedarburg, Wis., paints landscapes from her home in the farmlands of Wisconsin as well as scenes from the world over. Witnessed en masse, Hale’s paintings portray this rich and nourishing sentiment in bold fashion.

Hale and her family camped in Peninsula State Park when her children were little. Every time they came to Door County, she stopped by Edgewood Orchard Galleries, where she aspired to one day be featured. Edgewood, known as one of Wisconsin’s premier galleries, has been open since 1969. 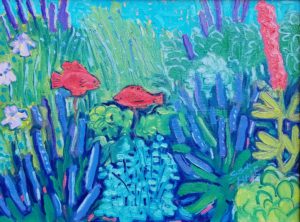 Hale’s work has now been found on Edgewood’s walls for almost 15 years, bearing witness to a long and fruitful career as a plein air painter. This year her collection features a number of smaller, more intimate pieces, seen in the courtyard gallery.

“I think that’s one of the basic things about humans,” Hale said. “They like to create something that’s their own.”

Hale has been an artist her whole life. She graduated from University of Wisconsin – Milwaukee with a degree in fine art and began showing her work at art fairs, painting Madonnas and religious figures in the fashion of the early Renaissance and Medieval masters. Her marriage brought her to Cedarburg, Wis., where she has lived ever since.

Almost all of Hale’s paintings are plein air, or painted on location. She also keeps a travel journal of sketches that she paints from. 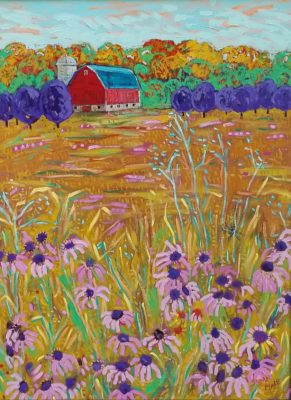 In addition to drawing from landscapes and nature scenes around her, Hale’s involvement with local artist organizations has helped her stay focused.

“I was very fortunate to move to Cedarburg,” she said of her home, which has a large arts community. Hale was a founding and active member of both the Cedarburg Artists Guild and the Cedarburg Cultural Center, which were formed shortly after she moved to Cedarburg. Door County’s myriad galleries and performance groups have similarly had an effect on Hale.

Hale cites a strong work ethic and determination as foundational aspects of her lifestyle.

“If you want to do something, you have to show up to your studio and do it,” she said. “If you wait for inspiration, you’ll be sitting around forever.”

Hale works studio days into her routine and sticks to her schedule.

“I don’t believe in artist’s block,” she said. “I think if artists show up to their studio and start working, then they’ll get something done. If I don’t know exactly what I’m going to be working on [when I get here], I start cleaning up my studio or looking through some of my art books or sketchbooks…and within an hour, I’ll probably be painting.”

Susan Hale is a featured artist of Edgewood Orchard Galleries’ Exhibit III, opening with a special reception July 15, 4 – 7pm. The exhibit runs through Aug. 15. Edgewood Orchard Galleries is located at 4140 Peninsula Players Road and is open daily 10am – 5pm. For more information call 920.868.3579 or visit edgewoodorchard.com. For more on Hale, visit susanhaleart.com.