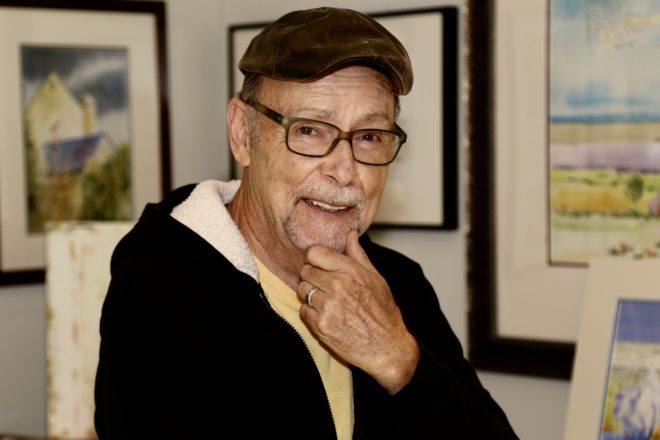 Artist, dentist and hotelier Ed Fenendael has made a career in teaching, traveling and painting

It’s 3 pm on a warm, September afternoon, and students at Ed Fenendael’s watercolor workshop are slowly leaving the painting studio’s classroom. Some are headed to their cars; others are walking into the gallery and shop to look at paintings and antiques. One buys a painting; another settles on a brightly painted birdhouse; and a third finds an old meat-tenderizer mallet that she just must have. Fenendael tallies up the totals, takes some cash and makes change, and heads into the house to run a credit card for the painting.

The early-1900s restored farmhouse is also a bed-and-breakfast – adults only, please, and no smoking or television. The rooms are named after artists: Vermeer, van Gogh and Bruegel.

Fenendael’s classes at Morning Mist Studio at Windmill Farm are smaller this year, and painting stations are spaced widely for safety. Everyone wears a mask, but because it’s one of the few teaching venues open, bookings have been strong.

Painter, teacher and hotelier – no one said an artist’s life would be easy. The pandemic has cut into both the inn’s visitor bookings and the studio’s student numbers, starting with canceling Kansas City classes in mid-March.

“Everything had shut down,” Fenendael said, “but I read and did some research and realized that if we could social-distance people and they would agree to wear masks, we could have some classes, although they won’t be the numbers I normally have. So instead of doing one weekly class, I’ve been doing two in order to be able to accommodate the people who wanted to come.”

The pandemic may keep Fenendael and his partner, Frank Villigan, in Baileys Harbor this winter – rather than traveling to do workshops in warmer locales – so Fenendael is considering offering workshops in his heated studio in October and perhaps into the winter.

He’s been painting – and teaching painting – for more than 35 years. He grew up in Pound, Wisconsin – across the bay, as he puts it – near Crivitz. He often came to Door County as a youngster with his family and decided he wanted to live here. Nearly 20 years ago, Fenendael made the move to his 10-acre property on Fairview Road in Baileys Harbor.

He had taken some painting courses as an undergrad at Marquette University, but more serious study through workshops were put on hold until after he’d finished dental school.

Five years out, while living in Kansas City, Missouri, and practicing dentistry, he started teaching – first on Wednesday mornings, then on Wednesday evenings, too, and eventually he added Saturdays as well at the Kansas City Arts Institute. After sitting in on a pastel course at the Central United Methodist Church, which had a great space for teaching, Fenendael began doing courses there and has never stopped. Until COVID-19, that is. He still hopes to get back there for a month of courses this spring.

From his experience teaching, he’s convinced that everyone can learn to paint – they don’t need a painterly gene.

“If someone has a desire to paint and the discipline to stay with it, that’s all it takes,” he said.

Fenendael’s own work continues to evolve. He emphasizes that his way of putting paint on the paper – the initial brushstroke – is not haphazard, but it has become a little more impromptu.

Much of his work is of rural scenes, often including barns, and it’s generally fairly light toned. But then I found “Living on the Prairie” – a work with wide brushstrokes of bold color. Fenendael enjoys painting farm compounds: barns connected to outbuildings with a round silo shape against the straight lines of roofs, gables and siding.

Maybe it’s his farm background, he said, but he loves things from the past – such as the barn, shed and silo that are abandoned and slowly deteriorating just up the road. Big barns are, to him, “Midwestern cathedrals.”

“I cleaned [the barn scene in the painting] up a little bit because it’s really in a sad state right now,” Fenendael said. “I hate seeing that because it’s so much of our heritage.”

He demurs when asked whether his style has changed, but he admits he may be painting with more contrast and more dark colors. He’s enamored of the French Impressionists and has done many workshops in Claude Monet’s gardens at Giverny, France. He also admires van Gogh and Matisse.

Fenendael recalls taking a step back from the beginning strokes of a recent painting – more fluid than calculated – “and I said, ‘Wow, this has a Matisse kind of look to it. This is really unusual.’ And that’s just been recent.”

Some people who had seen the work’s early stages asked to see the final product, promptly bought it and asked to be notified if he did another similar work. Most of Fenendael’s work is in watercolor, but he’s also worked with pastels and oils. He likes working large, with brushes that are two or three inches wide.

“I wonder if I shouldn’t do some abstraction, some abstract-type approach,” he said. “I haven’t followed through on that thought. I just enjoy painting the big paintings.”

For classes, however, Fenendael works on more modestly sized paper – no more than half of a 20-by-30-inch watercolor sheet – because that’s a size that students can handle with small brushes, and they can progress through a painting in a few sessions.

Fenendael has taught all around the country, from Florida to California, in addition to annual month-long stints in Kansas City. Shortly after moving to Door County, “the light went on,” he said. “I love to travel and thought, why couldn’t I do some international workshops?”

Since then, Fenendael has led students on workshops abroad once or twice a year – mostly to Europe, but also to Egypt and China. He had to cancel his plans for this year and hasn’t planned anything for 2021 – not yet, anyway – although the proprietors of a venue he’s used in Italy have written to say the area is safe, and they’d be delighted if Fenendael would return with a group.

“I do a lot of classes,” he said. “It’s just so rewarding to me to see how people get excited and continue to progress.”