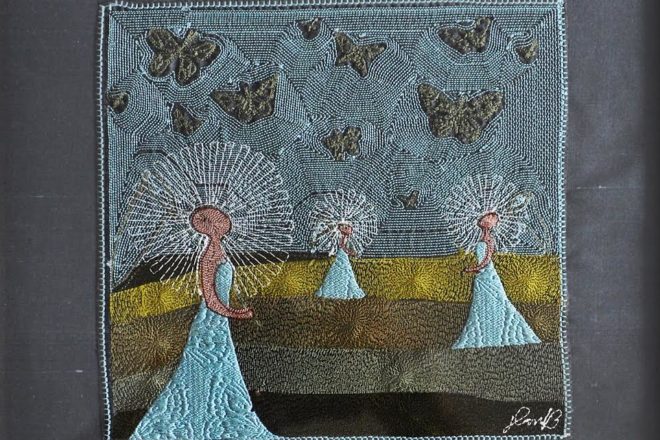 Jean Ferlesch’s New York apartment is filled with more than a thousand spools of thread, a rainbow of possibilities that, when combined with hand drawings and technology, become enchanting fiber works of art.

It’s a relatively new venture for the East Coast artist, who, for 30 years, worked as an interior designer for commercial spaces in New York. But when her store design career ended in 2008, she began exploring the possibilities of her lifelong love of embroidery. 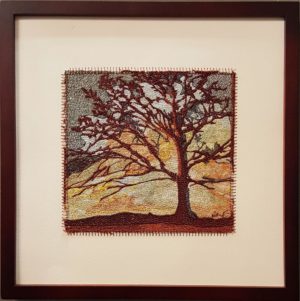 “I was looking for something that was a little bit more close to my heart,” she said. “I love embroidery. I did it in college on people’s jackets and I did it when I was pretty young. I was sewing. My mom taught me how to sew so I combined my love of drawing with hand embroidery.”

The turning point in her life came shortly after, when she discovered a home embroidery machine that brought together her expertise and passion for design, drawing, Photoshop and embroidery.

“That was it,” Ferlesch said. “Nothing mattered after that.”

Using the machine and its accompanying software, Ferlesch was able to digitize her drawings, virtually apply stitches, fills, thread lengths and colors, and have them stitched out on fabric (in her case, linen or silk).

She came up with a brand, Clothe My Soul, and began applying her designs to clothes and pillows largely for commercial sale. It wasn’t until she met Chad Luberger, of Plum Bottom Pottery in Egg Harbor, that she began applying her talents to cards and framed art.

“It’s a funny thing because I never saw myself as an artist,” Ferlesch said. “I just didn’t define myself that way. To me, art is a very complicated, big field so I just kept trying to fit into this commercial world and then I met Chad from Plum Bottom gallery and he’s turned my head around because he’s calling me an artist and he’s selling my work as art and he’s also teaching me how to up my game with my presentation. I love it. It’s very cool.” 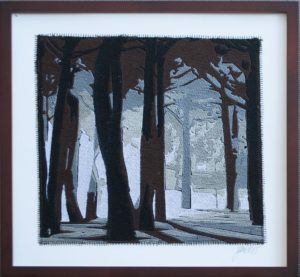 Each embroidered piece accounts for about two hours on the machine (and 80,000 stitches), leading Ferlesch to conclude that much of what she creates could likely not be recreated the old fashioned way.

“You can create these fills that are so tightly stitched like a piece of fabric that I can’t even imagine somebody being able to do it by hand, to be honest,” Ferlesch said. “I’ve gone to all kinds of embroidery shows and I know that they do stuff in India and Vietnam that’s quite intricate but I think they would probably go cuckoo trying to do this stuff. Using the machine and the software allows you to do things you would never even think of by hand.”

Despite the picturesque scenes outside the windows of her oceanside residence in Brighton Beach, Brooklyn, it is memories of her upbringing in Connecticut that inspire her vibrant designs of flowers and trees.

“I grew up on a piece of property that my dad just grew constantly, he was a gardener, sort of an amateur horticulturist,” Ferlesch explained. “I was in the woods and on that piece of property with the flowers … I sort of re-experience it while I’m doing the image.”

Recently Ferlesch has begun incorporating human figures into her floral and woodland designs, exploring the relationship of humans to nature and underscoring her growing dedication to protecting the environment – a dedication she hopes to further pursue by connecting with environmentally responsible organizations. 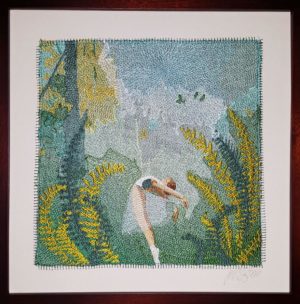 “It’s very important to me and I don’t think I realized how important it was until I started doing this,” Ferlesch said. “Growing up in the city and raising kids and running around like a maniac like everybody else, and just making a buck and trying to get them through school and all that kind of stuff. When I slowed down and started focusing on this, I realized what was important to me. It was nature, the natural world. That’s what I resonate with.”