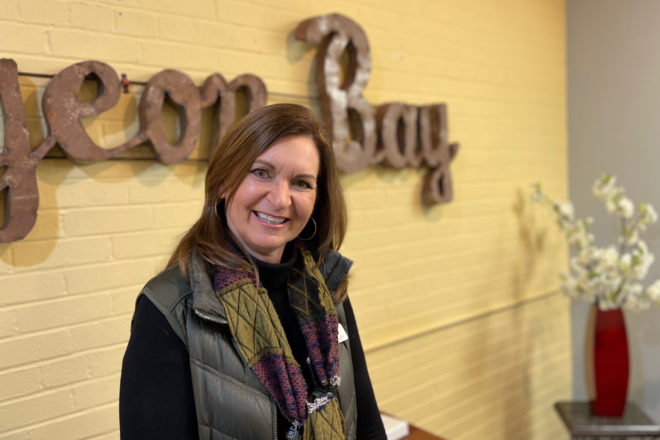 Pam Seiler a couple days before her retirement date of Dec. 15. Photo by D.A. Fitzgerald.

Pam Seiler walked into retirement when she left her Destination Sturgeon Bay (DSB) office on 3rd Avenue on Wednesday, officially passing the torch to her successor, Cameryn Ehlers-Kwaterski.

The executive director of the nonprofit organization has spent the past seven years tending to the economic vitality of local businesses and the good times of both visitors and residents alike. With funding from room-tax dollars and the City of Sturgeon Bay, DSB coordinates major events and special activities throughout the year, promotes Sturgeon Bay, fundraises and coordinates various initiatives, including projects such as the makeover of Graham Park or Walkable Sturgeon Bay or the wayfinding signage system installed late last year.

“It’s the best job anyone could ever ask for,” Seiler said. “We get to be part of everyone else’s memory making. This is their happy place; this is the place people bring their kids to have their memories that set up for the next generation. What could be better than that?”

Seiler’s taking early retirement to spend time with her already-retired husband, Rick, 68, who is 10 years older than she is.

“I like my husband too much not to want to spend time with him,” she said.

Seiler met her husband after graduating from college and moving to Door County to tend the home-interior stores she owned with her mother and sister – one in her hometown of Racine and a second store in the Main Street Shops in Egg Harbor. She intended to work for a season, but instead found her life.

“After the three months, I felt I had better friends here than anywhere in my entire life and figured out a way to stay,” she said.

The business expanded and attracted a buyer. They sold the store, and Seiler, married with two small children by then, became a full-time mom. She returned to the workforce in 2009 on a part-time basis at the Volunteer Center of Door County, a nonprofit organization that closed earlier this year.

She was urged to apply for her current position in 2014 by the person who was leaving it: Todd Trimberger, owner of Lifestyles by Bliss at the Marketplace on 3rd Avenue and current chair of the Destination Door County board.

“You want somebody to love and be passionate about this position as much as they possibly can,” Seiler said.

She landed the job with the understanding that they were event planners, “and that’s what we did: promoted Sturgeon Bay and produced events. Todd was such an incredible leader in those two sectors that I couldn’t touch that. I could maintain what he had done, but that was not my expertise.”

As a former finance major and owner of a retail business, Seiler instead played to her strengths of building relationships and adding a business structure to the operation. In doing so, she earned a seat at the table with the City of Sturgeon Bay and Door County Economic Development Corporation.

“We were a three-legged stool,” she said.

From that seat, Seiler gained access to the overall vision for the city and the various perspectives of employers and their needs. In turn, she saw the role of her office as one that helped to elevate the city’s quality of life and draw people to both visit and live.

Destination Door County markets and promotes the county as a whole, but community events – whether in Sturgeon Bay or Egg Harbor or Sister Bay – are the domain of community or business associations. Individual communities established those offices when the room tax was implemented in 2007 and tax dollars began flowing back into communities for local tourism marketing and promotion.

But those offices are small, with no upward mobility, and few, if any, benefits. Event production is also physically demanding and time consuming, requiring night and weekend work.

There’s a flip side, of course: “You listen to everybody laughing, and you see the smiles and the selfies,” Seiler said. But still, the job remains a high-turnover position that has made Seiler, at seven years, the longest serving of any of the existing community coordinators.

With the room tax increasing from 5.5% to 8% starting in 2022, all of the community associations will receive more funding. She said those additional dollars could make compensation and benefit packages more attractive, bringing some stability to the positions by turning them into careers rather than jobs.

Seiler announced her retirement earlier this year, and the vacancy brought Door County native Ehlers-Kwaterski back home with her family. That leaves Sturgeon Bay’s event management and project coordination in the competent hands of Ehlers-Kwaterski, who will in turn be backed by a supportive board and a solid network of community coordinators.

“I cannot say enough about the support of the community coordinators,” Seiler said. “We always met, and we always got together as a group because most of our offices are one and two people. We don’t have a team, so we formed our own.”

Ehlers-Kwaterski arrived in September and moved into Seiler’s office while Seiler shifted to a front-office desk and made it a priority to prepare her successor. Part of those preparations have included advice about how to set boundaries to achieve work-life balance.

“Don’t say yes to things that make you say no to your family,” she said.