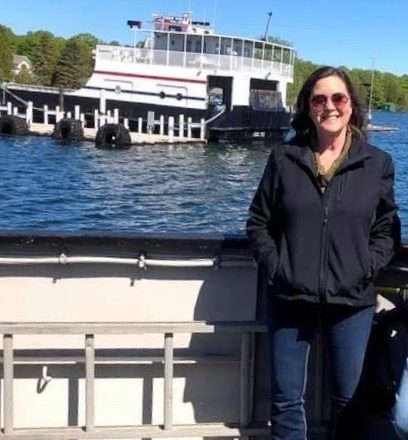 Tamara Jilot on an excursion to Washington Island. The active Jilot, 58, struggled to walk across her bedroom after catching COVID-19 in October. Submitted.

Tamara Jilot was shocked when she tested positive for COVID-19 in October. She only bothered to get tested at the suggestion of a friend who heard her cough.

“You sound just like my husband did,” said her friend, whose husband had caught the virus.

But Jilot said she’d been careful. She wasn’t on complete lockdown – she said the mixed messages about the virus were confusing – but she wore a mask most of the time, ate mostly takeout, avoided crowds and went up north to camp and ride UTVs with her husband. Lying low wasn’t a big stretch for her.

“COVID didn’t change a lot for me,” Jilot said. “I don’t get out much anyway.”

But the dry cough didn’t go away. On Oct. 8, she tested positive for COVID-19, as did her husband, but the 58 year-old Jilot figured she’d rest, down some chicken broth and Gatorade, and bounce back.

Then her energy disappeared. She struggled to have conversations because she couldn’t pull enough air in. Then she began passing out – first in the bathroom, then in the hallway and once right next to her bed.

“The last time, I hit my face on the way down, giving me bruises and a black eye,” Jilot said.

Six days after her positive test, she couldn’t even dress herself. That was the last straw for her husband, Ron, who backed the truck up to the door and took her to the hospital.

The next day was a blur. Nurses put Jilot on oxygen right away because her blood oxygen levels had dropped to 85. (A healthy level is generally considered 95 or higher.)

“Her story is a really good story to tell,” said Dr. Jim Heise of Door County Medical Center. “People will have little to no symptoms. It starts out really mild, and sometimes that’s it, but some end up getting very sick. A friend who had it told me that this is a disease like no other.”

The disease, Heise said, is nothing you want to get.

Jilot spent the next five days in the intensive-care unit, diagnosed with COVID-19-induced pneumonia and becoming one of more than 62 people who have been hospitalized with COVID-19 in Door County. More than two-thirds of those have occurred since Oct. 1. Like the rest of the patients, Jilot could have no visitors – not even her husband.

“They told me to call him and let him know I would be there at least five days,” she said. “It’s not the same as opening your eyes from a procedure and seeing somebody you know there with you.”

Doctors at Door County Medical Center gave Jilot what is now considered the standard COVID-19 treatment: convalescent plasma, the antiviral medication remdesivir, and the steroid dexamethasone. She also received immediate treatment to prevent blood clots because early in the pandemic, many COVID-19 patients were suffering heart attacks and strokes because the virus can cause blood clots.

“In a way you’re scared,” Jilot said. “You don’t know what will happen. They put a heart monitor on you right away. Then your family is freaked out when they’re talking to you, and then you realize you’re in the ICU, which isn’t where they put someone who is doing pretty good.”

But Jilot was so sick she said she didn’t care what they did to her. On day two, she began to get anxious about her children, her husband. By day four, she started breathing better. On day five, she was released, but she was far from recovered.

“I was in bed at home another five days before I felt the energy to get up and sit in the recliner,” Jilot said.

Meanwhile, her husband’s condition never worsened. Such is the case with the virus: It crushes or kills some but leaves others unscathed. Scientists are still struggling to learn why, but Jilot believes the medication methotrexate, which she takes for rheumatoid arthritis, might have made her more susceptible to COVID-19’s worst effects. That medication weakens the immune system.

“If one of my grandchildren sneezes, I’m going to get a cold,” she said.

As Thanksgiving approached, Jilot still didn’t have her energy back and was working to get over her fear of going back out in public.

Now she crosses her fingers that her medical bills aren’t crushing and that the disease doesn’t cause long-term effects. She’s slowly getting her energy back. She has friends who weren’t so lucky.

“I’ve had two friends who have died from this,” she said. During the last three weeks, another 1,111 Wisconsinites have lost their lives to the virus. But as Jilot’s story illustrates, deaths are only one way to measure the toll.

“Can we 100 percent prevent this? I don’t know,” Jilot said. “Is this vaccine going to be the end-all? I pray that it is. I don’t want anyone to get this.”