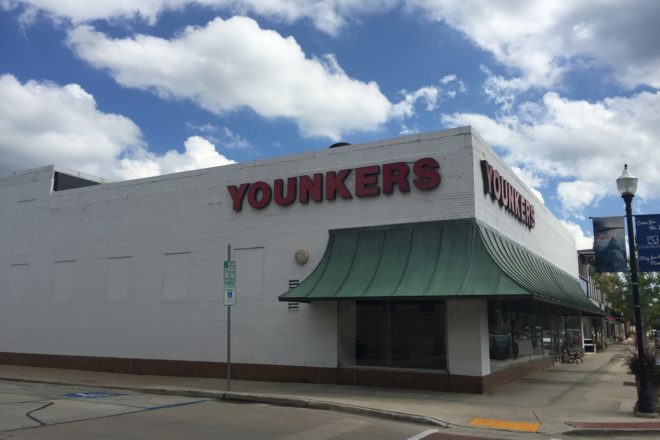 Removal of this skywalk and an underground tunnel will be completed as part of the renovation of the Younkers building at the corner of Louisiana Street and 3rd Avenue. The owners also intend to flood the space with natural light by reinstalling tall windows where only silhouettes of windows past exist now. Photo by D.A. Fitzgerald.

It won’t be long before the vacant Younkers building will again anchor downtown Sturgeon Bay with retail space worthy of its prominent address at the corner of 3rd Avenue and Louisiana Street.

“We are just waiting on some state permits,” said Todd Trimberger, who purchased the building earlier this year with Dr. Kelton Reitz, an internist at Door County Medical Center in Sturgeon Bay. “Everybody’s champing at the bit. It’s definitely going to be a whirlwind.”

Whirlwinds have the power to destroy, but this energetic project will instead lift up the 85-year-old building, preserving and modernizing the space to return it to its 1930s grandeur.

Trimberger owns Bliss, an accessories and home-furnishings store on Jefferson Street in Sturgeon Bay. He’ll move that business to the new space, expanding it to occupy the majority of the main floor. The renovated building will have a total of 20,070 square feet of leasable space.

“Hopefully over the next couple of weeks, we’ll be able to announce our tenants,” Trimberger said. “It will be a great collaboration. We pretty much have the first floor full.” Some other tenants have also committed to space on the lower level and the open second floor, or mezzanine.

The progress to fill the inside is being matched with progress to help finance the renovations. Most recently, the City of Sturgeon Bay received a $250,000 Community Development Investment Grant from the Wisconsin Economic Development Corporation (WEDC) that will enable the owners to install amenities that they may not otherwise have been able to do, such as an elevator, Trimberger said.

“It really gives us the opportunity to take things to the next level,” he said.

The partnership with the city was necessary for the owners to receive the WEDC assistance.

“Only a municipality can apply,” said Marty Olejniczak, Sturgeon Bay’s community development director. “But it’s meant for public/private partnership projects. Usually it’s for development, and more often than not, a redevelopment. So in that sense, we’re sort of a pass-through.”

The WEDC grants are awarded based on the ability of applicants to demonstrate the economic impact of the proposed project, including public and private partnership development, financial need and use of sustainable downtown development practices. Eligible projects are expected to generate more than $500 million in capital investments statewide. The project costs listed on the application that the city submitted were $1,142,000, but that’s not the total because it accounts for only the renovation of the first floor and making updates to the lower and mezzanine levels.

The project is still on track to be completed by October of this year, Trimberger said, even during a “weird, dark pandemic time” to help “get everyone through the gloom.” That timeline and specific impact appealed to WEDC. There are no requirements attached to the grant – such as creating a certain number of jobs – other than to help get the project over the finish line.

“We review all our projects to [ensure] they’re still up and running, given the pandemic,” said Missy Hughes, WEDC’s secretary and CEO. “This one in particular was exciting because it is still moving forward, and it’s just the type of thing we want to be funding to help communities remain vibrant, especially during these times.”

The property is downtown Sturgeon Bay’s largest retail building, and once renovated, it will provide multiple benefits to the city, Mayor David Ward said.

“Not only does it fill the huge hole caused by the loss of Younkers, [but] it allows a locally owned business to expand, and, importantly, the project will include public restrooms through a partnership with the city,” Ward said.

The building’s only restrooms are currently located in the basement and don’t meet accessibility guidelines under the Americans with Disabilities Act. Meanwhile, the city had been on the lookout for a place to construct public restrooms for downtown and had budgeted to create the new amenity this year. The partnership with the building’s owners means the restrooms will be accessible from Louisiana Street for both customers and the public.

“We thought it was a good solution,” Olejniczak said.

The project also includes removing a now-obsolete underground tunnel and above-ground skywalk that once connected the Younkers building across the alley to a building next to the post office that had been used as warehouse and office space.

“But they’re in bad shape,” Olejniczak said. “The tunnel leaks, and the skywalk is in tough shape, and furthermore, unless the two buildings are joined, they don’t serve a purpose.”

“We’re excited to get this developed,” Olejniczak said.