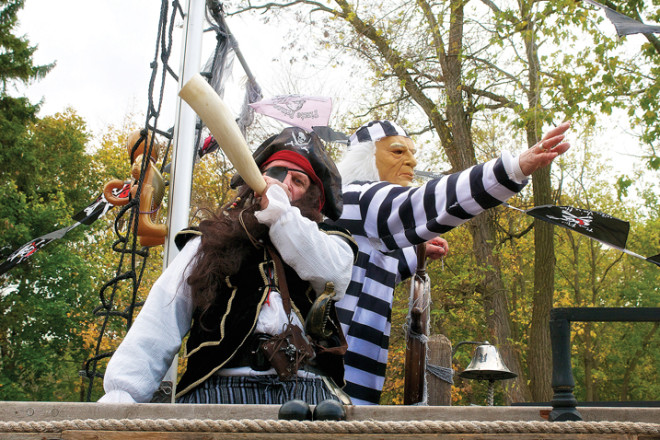 A lot of people that look up to celebrities these days do so for the absolute wrong reasons, just wishing they could party it up and spend money without a care in the world like their favorite flavor of the month.

While Door County’s Pirates in the Harbour, a charity group that seeks to emulate “Margaritaville” and “Cheeseburger in Paradise”-crooner Jimmy Buffett, is definitely about having a party (yes, with margaritas and cheeseburgers included), it’s also about bringing Buffett’s sense of responsibility and giving down to a local level. 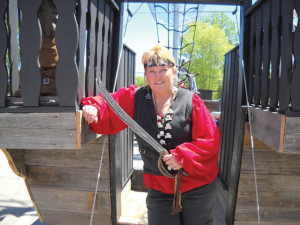 Photo provided by Pirates in the Harbour.

“The guy is probably one of the top paid musicians in the world, but I’d guess that he gives more money back than most of them do,” says Pirates in the Harbour Founder and President Diane Abts. “Because that’s what he’s all about.”

Recently, said Abts, Buffett has hosted a benefit concert in the wake of the BP oil spill in the Gulf of Mexico and has flown “plane after plane” to Haiti after the earthquake there. But his example has also inspired over 200 clubs internationally to join Parrotheads in Paradise, the overarching charity group that Pirates in the Harbour is a part of.

“Basically, the motto is party with a purpose and have a blast doing it,” said Diane. “You kinda want to leave things a little bit better than when you found them.”

Pirates in the Harbour has been trying to make things a little better for just over three years now, and in that time its 30 members have managed to raise over $10,000 for local charities. 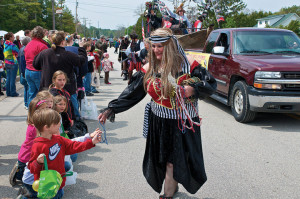 The group has also managed to make a name for itself by showing up to parades decked out in full pirate gear (think hats, swords, eye patches, the works) and riding their very own 30-foot pirate ship.

“Whenever we’re in the parades people are watching the different floats and all of a sudden they catch sight of the pirate ship. You can just hear the cheering. I mean, everyone loves a pirate, right?” said Diane.

But it’s not just parades that the pirates show up to in full dress. Whether they’re out ringing bells for the Salvation Army or manning a water tent at the Door County Half Marathon or the MS Walk/Run, the Pirates in the Harbour put forth an effort to make giving back just a little bit more fun.

“At Jimmy Buffett concerts there’ll be these things called shot-skis, which is an old ski with four shot glasses mounted on it,” said Norm Abts, Diane’s husband and fellow pirate. “We did that with Gatorade at the MS Walk and people really got a kick out of them.”

“The ones that walked on Friday and then again on Saturday came back and asked if the shot-ski was there,” said Diane. “We had a name for them.” 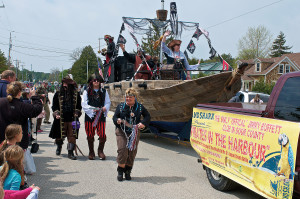 Photo provided by Pirates in the Harbour.

Parrotheads in Paradise is a national organization, but the Abtses said they feel it’s important that all the money they raise is spent locally by organizations that will actually use it to benefit people, not just pay for overhead. In the Pirates’ first two years, they donated $2,500 each year to DOOR CANcer, and this year most of their proceeds went to Door County’s four food pantries.

“It’s a little bit different up here than it is with other, bigger clubs,” said Norm. “It’s nothing for them to get two, three, four bands playing at an event and bring in $23,000 an event. We can’t do that. If we pay for a band, we’re in the hole.”

“$10,000 over three years may not sound like this astronomical amount of money,” said Diane, “but for how we’re earning it and where the money’s going, to me, that’s a pretty big deal.”

Diane said that the Pirates were involved with or hosted 17 different events last year, the biggest of which was their annual Haunted Happening held at Mr. G’s in Jacksonport. At the time of this writing, the Pirates hadn’t yet decided where the money they raise during their 2013 events will go, but Diane said it will definitely stay in Door County.

“Our idea of making sure our money stays local is so important to us that we don’t want to deviate from that if at all possible,” she said. “This is the county we love.”