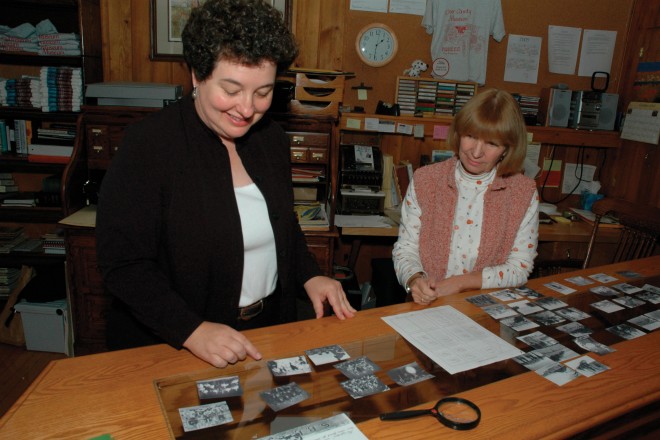 Jinkins and Weir sort through historical photographs of Sturgeon Bay for their new book. Photo by Dan Eggert.

History, like languages, can be lost unless passed on through word-of-mouth or written documentation. Sturgeon Bay’s beginnings could become whispers of a time that once was, but with the help of two employees at the Door County Museum, Ann Jinkins and Head Curator Maggie Weir, along with the Arcadia Press, future generations who reside in and visit Sturgeon Bay will be able to look back on how the town was born and grew into a vacation destination at the mouth of Door County. A book, due out next spring, is being published by Arcadia Press, a national publishing company, that focuses on local history.

After years of being steeped in Sturgeon Bay’s past as employees at the Door County Museum, both Jinkins and Weir were thrilled with the opportunity to compile a book of photographs to preserve Sturgeon Bay’s start. From the hum of the sawmills, the chill of the icehouses, and the building of the canal, the images (240 in all) and captions, written by Jinkins, paint a picture of the small working-class community that once was.

The two teamed up with Arcadia Press, a company Jinkins said has a definite idea of what they want for the publication. “They have a very specific formula that you use where you supply historical pictures with captions. There has been a book done already on Door County; there’s one on Sister Bay; and there was one done on the Sturgeon Bay Shipyards, too, I believe.”

The idea for the book began with a simple phone call, according to Jinkins. “Somebody called asking me if I knew anybody that would be interested in doing [a book] on Sturgeon Bay. I thought it over and figured, if anybody else does this, the county has the pictures, so I know I would be working very closely with that person anyway. I thought, why not just do it? Then Maggie and I together thought that we would do it to benefit the museum.”

Both Jinkins and Weir began at the museum as volunteers. Jinkins volunteered for about 20 years before joining the staff fulltime, but she said she really doesn’t consider it much like work. “To me it has been kind of a gift to be my age and to be able to learn about the history of this area from older people. Over the years I’ve known people that have told me things about different buildings or things that happened here. Now it’s become a part of me.”

Jinkins cites Orville Schopf, who recently passed away, as someone she always looked to for information and great stories. “He knew so much. He had such a memory. He was considered the county historian, and he was always the first person I went to for anything. I’d say, ‘Gee, I don’t know the answer to that, let me call Orv.’”

While Jinkins said she and Weir didn’t have trouble finding many of the pictures because of their connection with people like Schopf and the Door County Museum, they also found when they asked other local resources for help, people were very receptive to the idea. “People have been very generous,” Jinkins said. “If I asked them, they were very helpful. The Advocate and some of our volunteers here have brought pictures in. I think most people are happy to share historical pictures.”

Weir also has a long-standing connection to the museum, although not a native to the area. She moved to Sturgeon Bay with her husband, Jeffrey, an attorney who coincidentally works with Jinkin’s husband Mark at a local law firm. “They’re partners at work, and now Ann and I are partners,” Weir joked.

Since 1984 she has worked with the museum. She admits to always being interested in the area’s history, and said that sometimes where you come from isn’t the first place you become fascinated with. Weir pointed out that often people don’t explore the things in their home area. “People who grew up here haven’t been to the tourist areas that most people come here to see.”

The two women have been gathering the photos for the project since last spring. They are now in the process of organizing the images into chapters and scanning them into the computer, but Jinkins notes their November 30th (2005) deadline is quickly approaching. With the help of some new software at the museum, she is confident everything will make it to press on time. “I think it will all happen before [the deadline]. It has to be laid-out and the captions have to be written. The pictures are pretty much all scanned.”

And while the women are wrapping up the process to go to press, Ann’s husband admits it’s been interesting hearing stories from his wife about her research. “I love to learn about the relationships and historical facts that she knows. The Advocate occasionally runs a picture that reads ‘does anybody know who this is?’ and a few weeks ago somebody contacted Ann and said, ‘that’s my father.’ So then, of course, Ann looks at the picture and knows what building it’s taken in. [The book] is really a great way for the community to learn about some of the history.”

For more information on the publication, due out early next spring, contact Ann Jinkins or Maggie Weir at the Door County Museum at (920) 743-5809.