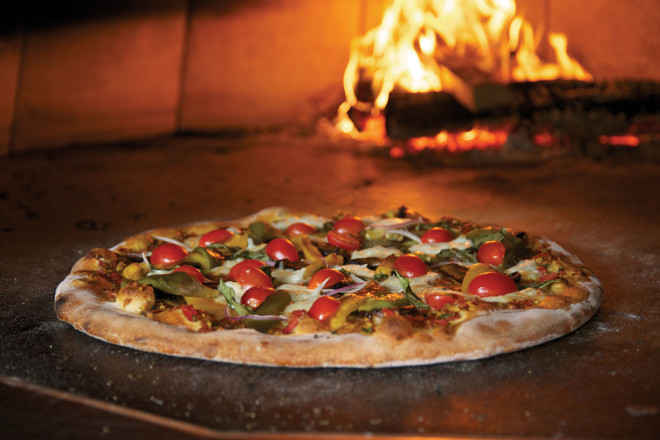 Wild Tomato pizza quickly earned a reputation as among the best in Door County. Photo by Dan Eggert.

Most business deals that start with a bet don’t end happily ever after, but Sara and Britton Unkefer are beating the odds. Two years after purchasing iconic Digger’s restaurant in Fish Creek, the couple has transformed it into Wild Tomato Wood-Fired Pizza and Grille with a following as rich as the local ingredients used in their menu.

“We made a bet to ourselves that if we wanted to move back to Door County, we weren’t going to do it until we could own our own restaurant,” said Sara. 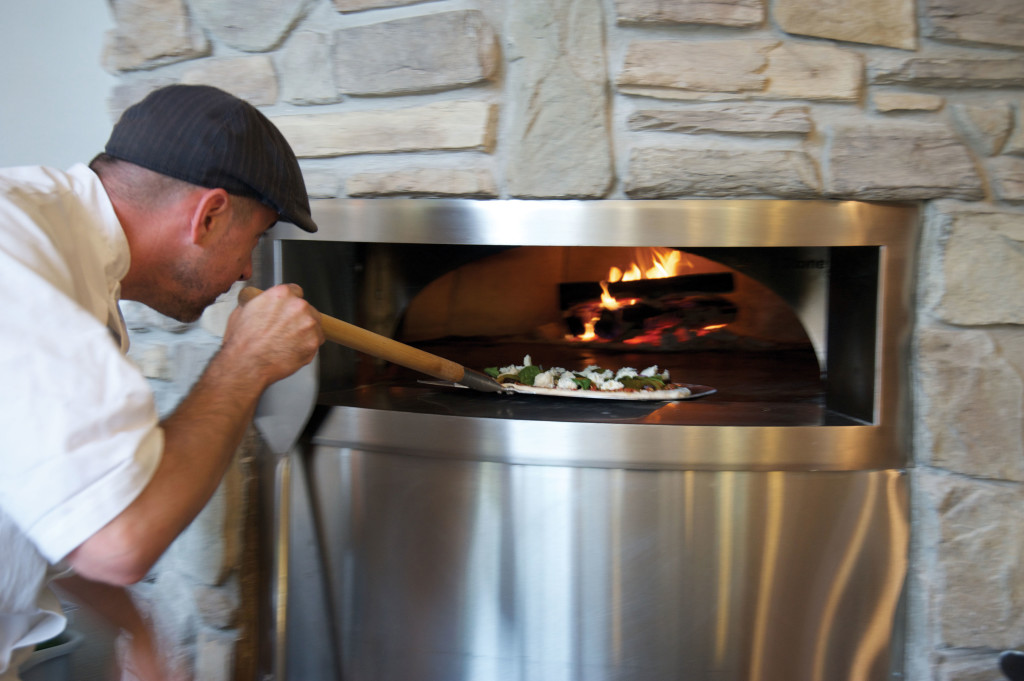 Britton Unkefer works his magic at his wood-fired stove at Wild Tomato. Photo by Dan Eggert.

She and Britton had left the peninsula in the fall of 2003 to attend culinary school at DCT Swiss Hotel Management School (now DCT University Center). When they returned to the States – she with plentiful experience in European pastries and chocolate and he with a wealth of knowledge surrounding European cooking – they moved to Milwaukee. Sara opened her own business, Cake Lady and Petite Pastries, and Britton worked first as the executive chef and general manager at Sticks and Stones in Brookfield, and then as corporate executive chef for Water Street Brewery Restaurant Group.

They had been looking at restaurants in Door County for a few years when they made the move in March of 2008. Britton and Sara worked quickly toward making the restaurant their own. Not only did they change the exterior appearance and interior décor, they also added a wood-fired oven, which would become the focal piece of their restaurant and menu. However, as all of the changes took place, Sara and Britton aimed to keep the family-friendly appeal of the former establishment.

“We have a family,” said Britton. “We know how important it is for us to go to a restaurant and feel comfortable having our kids.” The wood-fired oven created part of this appeal, as pizzas are prepared in the open in the style of the old pizzerias, providing kids with something to watch as soon as they arrive and providing parents a respite to enjoy a glass of wine or a beer before their meal. 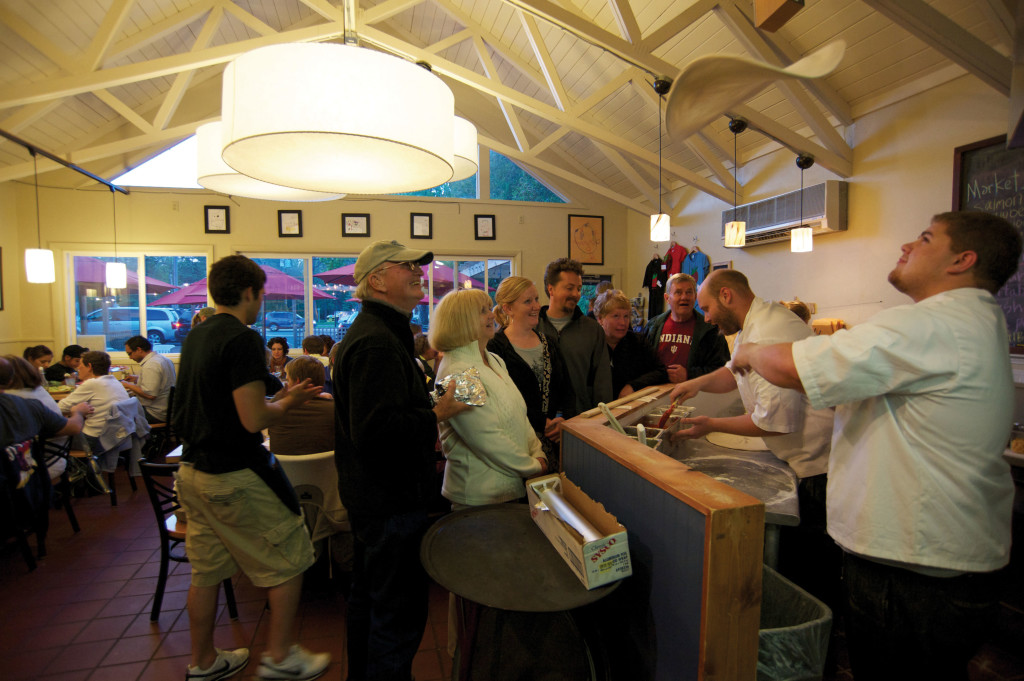 It didn’t take long for Wild Tomato to earn a reputation as one of Door County’s best restaurants. Photo by Dan Eggert.

Britton and Sara also felt passionate about integrating the high standards they had become accustomed to in their previous culinary experiences into Wild Tomato.

Britton grew up in the restaurant world, as his parents owned the ever-popular Nelsen’s Hall on Washington Island for seven years. Better known to most as the Bitter’s Pub, the restaurant and bar were bustling, exposing Britton to the rigors of owning a restaurant early on.

“I worked from eight in the morning until midnight when I was a kid,” he said. “I would get a break here and there during the day, but not much of one.” Despite the long hours, the lifestyle seemed to suit Britton, who continued his venture into the world of food at the New England Culinary Institute in Vermont. After graduation, he worked at Wolfgang Puck’s award-winning San Francisco restaurant, Postrio. It was there that he was introduced not only to wood-fired ovens but also to impeccably high standards.

“There is probably not any restaurant in the state that even comes close to the quality that we put out and the ingredients that came in,” said Britton. “It was a 165-seat restaurant, and we had two little walk-in coolers. They were emptied every day and restocked every day…The volume was so great, and the quality just had to be there.”

As the head baker, Britton would make 200 loaves of bread a day from scratch, in addition to a slew of other items for the restaurant. As he went about his daily baking, he would watch the purchaser receive food.

“That guy tasted everything that walked in the door,” said Britton. “He had his nose in the chicken, in 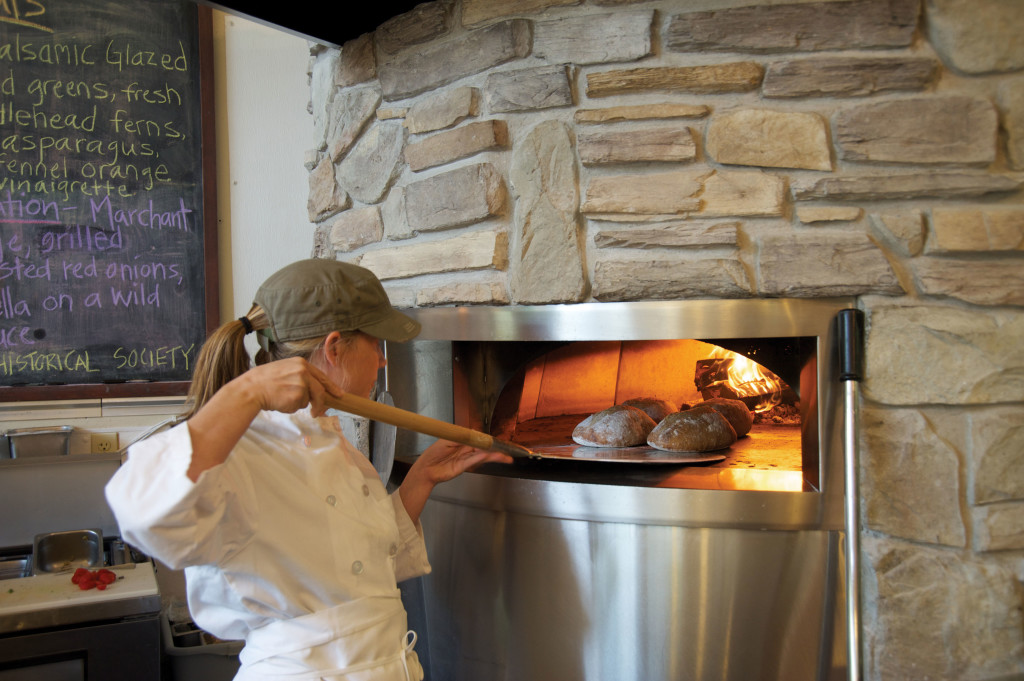 the ducks, in the fish, everything…It was just a standard that we had.”

Sara was also entrenched in the culinary scene near San Francisco, although at a different time than Britton. She had an apprenticeship in Petaluma, California under Alan Scott who, according to his obituary in the New York Times, played a vital role in the revival of wood-fired ovens across the United States. In addition to working under Scott to build and repair wood-fired ovens, Sara continued his weekly tradition of making and delivering bread in the community.

She also made connections with pastry chef Elisabeth Prueitt and baker Chad Robertson, owners of Tartine Bakery in San Francisco, currently one of the most respected bakeries in the country. Sara worked in Prueitt’s pastry shop and helped sell bread at the Berkeley Farmer’s Market with Robertson.

“Those people who were my first inspiration, who were just so wildly passionate about food – that was their life – those were my influences,” she said. “Those people drove that standard into us, [and] that’s what we do here. There are very few things that are not made from scratch here.” Off the top of her head, only ketchup and barbecue sauce came to mind.

In addition to making things from scratch, the couple also strives to source as much of their food locally as possible. 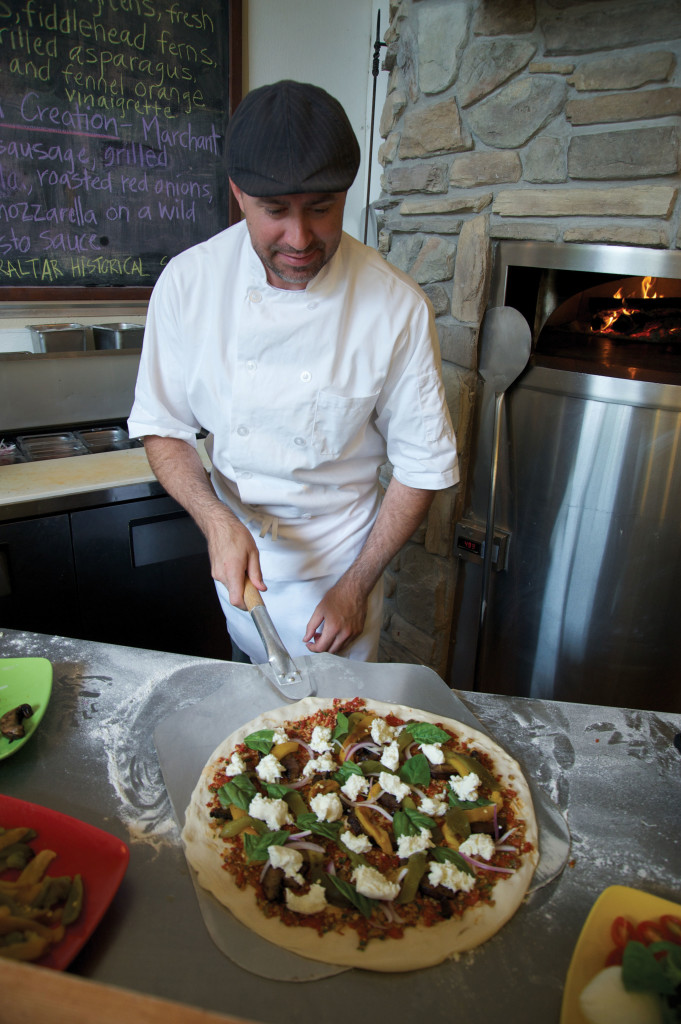 “I started using local ingredients for selfish reasons because I wanted the best product I could possibly get – and the freshest,” Britton said. “What comes out of it is actually that you help your neighbors and the local economy.”

“And, it’s sustainable,” added Sara. “Food is not traveling from millions of miles away. The local growers that we use are using sustainable practices that are revitalizing the land and soil instead of stripping it.”

Wild Tomato sources produce from a number of areas, as one grower could not likely provide them with all of the produce that they need nor could they take all of the produce from a single grower at one time. In addition to making purchases at local farm markets and utilizing Getaway Car Farm to Kitchen, a distribution service for local growers operated by Nick Devily, they have worked quite a bit with Mark and Amy Savard of Wildwood Farms, and this year they will get all of their beef from Jonathan Orrick of Narrow Gate Farm.

Wild Tomato’s menu also caters to varying dietary needs. Vegans, vegetarians and people who are gluten-intolerant have options from sandwiches and salads to pizzas. The desire to accommodate everyone, once again, stemmed from their previous experiences. While at Sticks and Stones, Britton would get anywhere from two to six requests a night for gluten-free meals, and Sara’s bakery was getting more and more inquiries for wedding cakes sans wheat.

“We thought it was a natural thing to do,” she said. “We really have a huge crowd that comes here knowing that they can eat gluten free.” This year Wild Tomato will also offer a couple of gluten-free beers.

While the standards they have set for themselves are high – Britton’s philosophy on cooking being:  “It doesn’t matter what you are cooking; just make sure that it’s the best” – they want to make sure that the restaurant continues to feel comfortable. 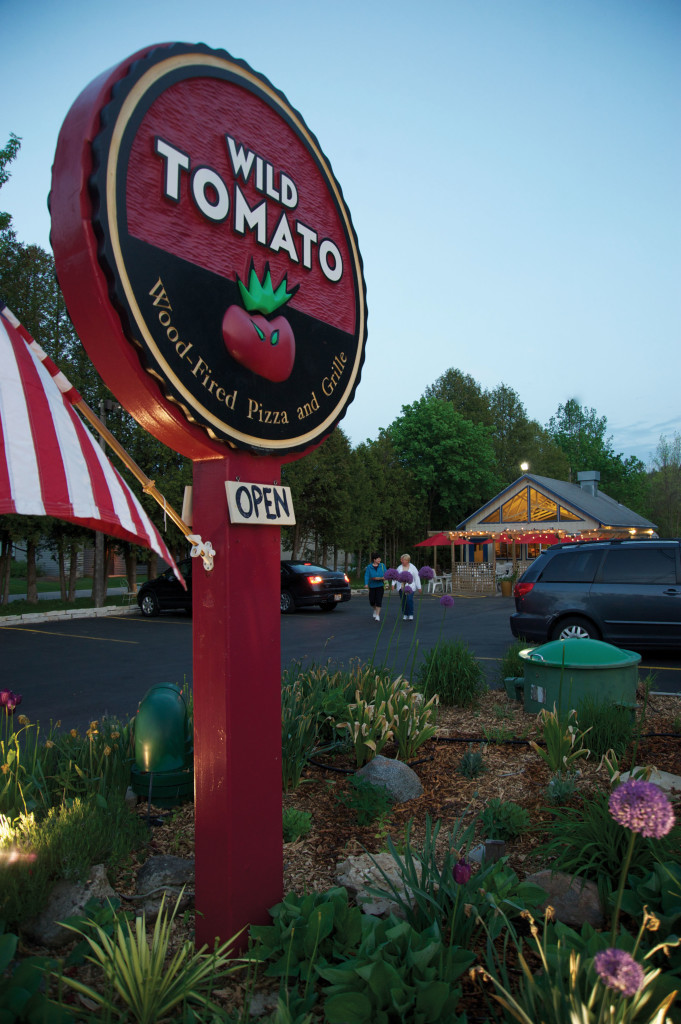 The Wild Tomato sign is one of the most recognizable on the peninsula. Photo by Dan Eggert.

“We didn’t want anyone to think that we were going to start going to these upscale, gourmet pizzas because that’s not what we have ever intended to be,” Britton said. “We want to have [Wild Tomato] for everyone.”

And, thus far, everyone seems to enjoy Wild Tomato. The couple finds value in the silent compliment of a return customer, such as vacationers eating at the restaurant four or five times in their week-long stay or locals with what could be described as regular appointments. They also take pride in their customers’ verbal accolades proclaiming, “This is the best pizza I’ve ever had!” (Last year by June the restaurant had tallied 40 such remarks before they got too busy to keep track.) The word of mouth advertising they have received is further proof of Wild Tomato’s established, loyal customer base.

It’s that loyalty that prompted Sara and Britton to explore the option of an addition to the building during the winter of 2009. They were working with an architect to create a more comfortable, winterized space for their customers, as well as their staff, that would include a larger kitchen and bakery area, a designated waiting area, a to-go pick-up window and indoor, handicap-accessible bathrooms.

However, four months into the process, Britton and Sara received news from the zoning administrator that they were in a FEMA-designated flood plain; they would not be able to expand their footprint. The process was halted, tied up in the red tape of a $20,000-plus engineering study, a $5,000 FEMA application for a Letter of Map Amendment, conversations with attorneys at Senator Feingold’s office, flood insurance, etc.

“I don’t ever know if we’ll do that addition now,” said Britton.

However, the couple knew that doing nothing to accommodate the growing demand for Wild Tomato was not an option. Before re-opening in the spring of 2010, they remodeled their kitchen in an effort to make it as efficient as possible. By re-organizing the back of house operations, such as reorienting their line and installing an on-demand hot water heater, they were able to make the most of the space they did have.

“Maybe there is something to be said about a small spot and just keeping it small,” said Sara.

She continued, “We are really passionate about what we do, and we’re just happy that people are very receptive to [it]…We love what we do. Absolutely love it.”

Sara and Britton Unkefer aim to contribute to society with their sustainable business model, but they also aim to make an impact on the community they call home in other ways. Through their “Donation Creation” – a monthly pizza special where a dollar from each purchase is donated to an area non-profit organization – Wild Tomato donated $1,865 back to all facets of the Door County community in 2009.

The non-profit organizations benefitting from Wild Tomato’s generosity in 2010 include: