In a tacit acknowledgement of recent contentious town board meetings where Door County Sheriff’s deputies were on hand, Liberty Grove Town Chairman John Lowry started out the public hearing portion of the special Nov. 18 budget meeting with a call for civility.

“Keep it civil and to the point,” he said before giving the floor to the audience.

Three questions were up for debate, but it was the first one – the town board’s request to permanently increase by $200,000 the state-imposed levy limit, a 12.7 percent increase – that drew the standing-room-only turnout of about 200 people.

Thirteen people spoke, with the majority speaking against the levy increase, and with most of those delivering the same message to the board – “live within your budget.”

First to speak was Town Board Supervisor Lou Covotsos, who detailed the various issues for which people hold a grudge against the town board – everything from how certain people, including Covotsos, were appointed to the board to the tree-cutting on Isle View and Garrett Bay roads. While those are valid issues, he said, they should not be considered when voting on raising the levy limit. 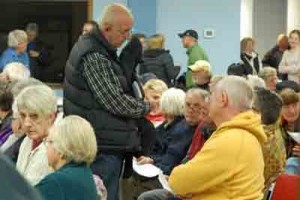 “If someone thinks this is a way to stick it to the town board or to the town, it’s just not going to happen that way,” Covotsos said. “The board is not going to change. The town will be affected.”

But all of those previous issues – the tree cutting, the town board’s lawsuit against the Door County Board of Adjustment and Rowleys Bay Resort, even the purchase of chairs for the town board members – were brought up by various speakers as they advised a no vote on the 12.7 percent levy increase.

The 13th speaker was former town board supervisor Hugh Mulliken, who, he pointed out, has represented Ward 3 of Liberty Grove and Ward 2 of Baileys Harbor through 12 budget cycles on the Door County Board of Supervisors. He acknowledged how tough it is to stay within levy limits. His concern was that a yes vote would permanently raise the levy by $200,000. He suggested a no vote and that the board find things to cut in its budget.

After the hearing on the first question, Lowry ended the public hearing and opened the town meeting. After explaining the levy limit override the town was proposing and mentioning that the levy would go down as the town pays off its indebtedness ($46,928 remaining for a platform truck that will be paid off in 2014 and two bonds, for $1.07 million and $1.08 million, both of which will be paid off in 2018), he opened the floor once again to speakers.

“If you don’t want to trust us or believe us that we’re not a bunch of robber barons, I can’t change that opinion,” she said, but added, “We need to do this.”

But after the paper ballots were tabulated, 98 voted against the levy increase and only 77 voted for it.

A joint meeting of the town board and finance committee will be scheduled to hammer out a highway budget.