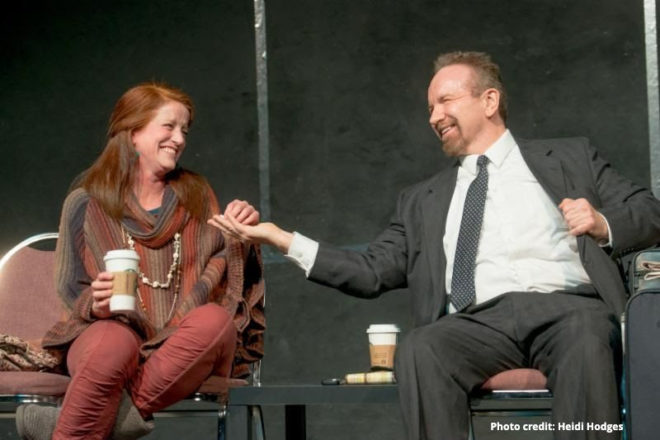 Amy Ensign and Doug Mancheski in ”Shooting Star” at TAP.

An airport in middle America is the setting, but the two characters in Steven Dietz’s Shooting Star won’t be flying anywhere. Instead, they travel back in time through the memories they forged together during their years (or, rather, 18 months) of dating two or so decades ago.

The pair first met as their younger selves while attending college in Madison – back when the world was still largely a mystery to them and their futures were blank slates. Now, in a two-act play directed by James Valcq, they meet again unexpectedly, launching into an awkward, nostalgic and bittersweet experience.

Elena Carson, played by Amy Ensign, is a patchouli-wearing, NPR-listening liberal who is still managing to live as an untethered free spirit. She’s en route to visit a friend in Boston who is need of support – and, apparently, the rain stick she’s taking along. Her former boyfriend, Reed McCallister, played by Doug Mancheski, has changed a lot since dating Elena. Now the married, conservative-leaning father of a 12-year- old daughter, he has donned a serious business suit along with his title of assistant senior manager.

The play opens with the pair clumsily spotting each other in the terminal, then acknowledging their inescapable situation and attempting to bridge the decades since they last spoke. From both you can sense the begrudging nature of the initial interaction: they share a lot of history, but is it better left alone, kept at bay by small talk and niceties? Or, could both benefit from unearthing the past?

As the snow keeps falling and flight delays keep coming, they tentatively return to the days when their dreams and daily lives were entwined.

Shooting Star is relatable in so many ways, resurrecting the giddy happiness and devastating loss of naïve first loves. Elena and Reed wistfully remember their life together – the good times, the inside jokes, the pain and missteps. Their meeting is a blend of memories and updates about their present lives, which allows the audience to slowly connect the dots about how they arrived at who they are that day.

The playful banter is strong from the start, but it soon leads to heartfelt – and sometimes heated – conversation. Time and maturity allow the pair to revisit their history with more honesty. “One of my therapists, years ago, once told me that if I ever saw you again that I should not, under any circumstances, tell you all of the things that I’ve been waiting for years to tell you,” Elena reveals before the plot thickens. Emotions rise, and, aided by airport bartenders, guards are lowered.

As the story of their relationship unfolds, the audience rides along on a journey of intimate moments and new revelations that had long been concealed. We are treated to the humor that their current political differences and shared love for oh-so-seventies music foster. Eventually we come full circle, understanding more about the present-day versions of Elena and Reed and all the new complexities they’ve accumulated with the passage of time.

“It was raw, honest, sad … and yet so funny,” said Jennifer Gentry, who attended opening night. “I didn’t expect to laugh as much as I did. You could really relate to the characters, and the acting was on point. It is a great show for adults of any age, but I can imagine especially for anyone who attended college in the ’70s. There is a great deal of nostalgia!”

Buy your ticket to see Shooting Star and get stuck in an airline terminal with these two. It’s an “if only I could be a fly on the wall” situation, and in this case, you really can.