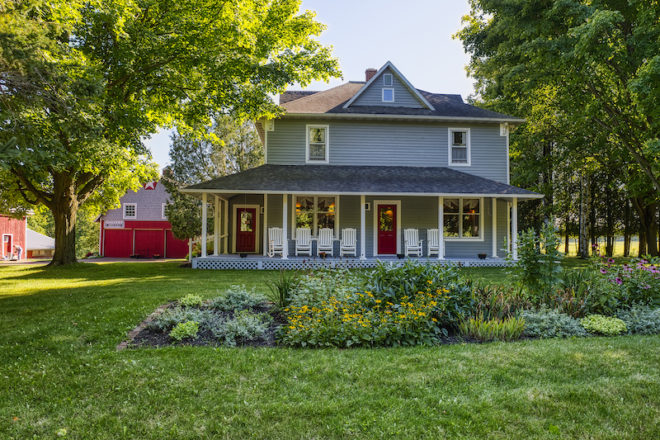 Gretchen and Dick Regnery were UW — Milwaukee students when they married in 1970. She later became a registered nurse, managing a large home-health service, and he worked for the Social Security Administration. But this urban couple had a dream: They wanted to own a bed-and-breakfast in Door County. And not just any B&B, but one with an art gallery, a large vegetable garden and a small flock of sheep.

Long before they started their search for such a property, the perfect place was waiting for them at 3831 Clark Lake Road, adjoining Whitefish Dunes State Park. The big, American Foursquare-style farmhouse was built by the Graf family in 1908 and occupied by its descendants for more than 70 years. Gretchen and Dick purchased the property in 1983.

Her parents, Grace and Ernie Waidelich — both skilled weavers — moved with the couple to the 80-acre Whitefish Bay Farm. To make space for the two couples, plus four guest rooms with private baths, they had to double the size of the house. That would not have been a problem, except that the county planning department said it was too close to the road, and if the footprint was going to be changed, the building had to be moved back 10 feet. Not easy — but not a deal breaker either for the Regnerys, who finally had their dream almost in hand.

The house was moved — not 10 feet, but 40 — and a 2,000-square-foot, two-story addition was completed. The art gallery, created in the old farm granary by an earlier resident, was ready to go. Check. Next they planted a huge vegetable garden and purchased their initial flock of 20 purebred Corriedale sheep — one of the very few flocks worldwide that includes a majority of colored Corriedales. The flock has been as large as 145, though it now numbers 75. The first guests arrived at Whitefish Bay Farm B&B in 1991.

A wide, welcoming porch stretches around two sides of the front, where old-fashioned rockers are lined up, ready to offer relaxation. Guests step into a large common room, with several couches for reading and chatting, and the long, Scandinavian-style table that accommodates eight for a communal farm breakfast.

The four guest rooms, each named for a local flower, have original art that carries out the theme. Each has a distinctive look and feel.

Breakfast, served promptly at 8 am, is always made from scratch, with many of the fruits and most of the vegetables and eggs grown on the farm or produced locally. The meal always begins with a fruit delight, followed by a rotating menu of egg dishes with muffins or coffee cake, waffles or pancakes — but rarely French toast. (When Gretchen was helping to edit recipes submitted for the Wisconsin Bed and Breakfast Association Cookbook, she noticed that nearly every other B&B in the state was serving French toast.)

Following breakfast, guests may tour the farm, which gives them the chance to learn how it operates and meet the sheep up close. (Dick says the sheep love to make new friends.) Dick has written a book about their life with sheep, Ruminations of a Grumpy Shepherd, which is available at the farm or on their website. Get recipes from Gretchen’s cookbook Breakfast at Whitefish Bay Farm.

The art gallery, open 12 – 5 pm except Tuesdays, features Dick’s amazing photography, hand weavings, hand-spun and hand-dyed yarns, pottery and other fiber items. Hand spinning, hand weaving or fiber dyeing takes place there most days. In the house, there’s also a huge loom and spinning wheel in the gathering room, where guests can observe Gretchen and Dick performing skills they learned from Gretchen’s parents. The Mercantile online store sells yarn from their sheep — spun at Blackberry Ridge Woolen Mill in Mount Horeb, Wisconsin, and hand-dyed by Gretchen.

Although the care of guests, sheep and the farm require a huge amount of time, the only occasional help the Regnerys hire are a veterinarian, sheep shearer and lawn mower.

Until Sept. 11, 2001, Whitefish Bay Farm B&B was open year-round. Gretchen said, “After that tragedy, Dick and I looked at one another and said, ‘You know, we’ve been working 365 days a year for 11 years. We need to slow down a little and make more time for us.’” Since 2002, the B&B has been open from mid-May to mid-October.

“Guests love the peace and quiet of this rural atmosphere,” Gretchen said. Off the beaten path two miles east of Highway 57, the B&B is still just 15 minutes from Fish Creek and closer than that to Sturgeon Bay. The Regnerys have hosted guests from all 50 states and 45 countries.