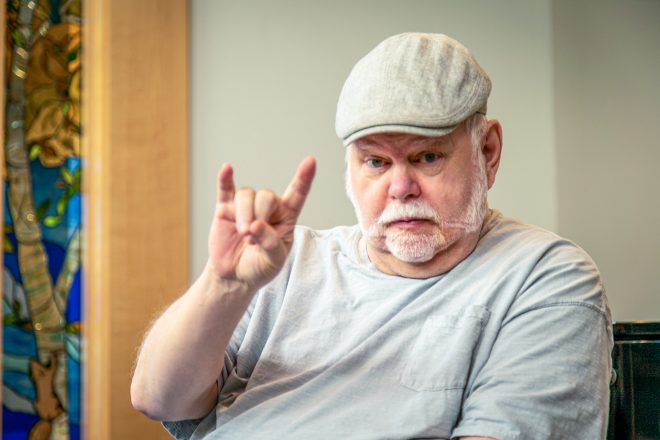 Many people who have heard Pat Judy play sometime during his 53-year career as a professional drummer have probably said, jokingly or not, that anyone who’s that talented must have been born with drumsticks in his hands. Of course, that’s nonsense. He was six before his dad bought him his first drumsticks, but he did begin drumming with brushes when he was four.

Judy’s dad would have been a drummer himself, had his parents not felt that it wasn’t a dependable way to earn a living. Still, he passed his passion and talent on to his son. Judy said, quite seriously, that his musicality started when he was an infant.

“My dad always got up to give me my 3 am bottle, and when he burped me, he patted my bottom in time with the jazz that was playing in the background,” Judy said. “By the time I was four, my parents realized I was banging on things with perfect rhythm. Dad asked a drummer friend if he should get me drumsticks, and was told to start me with brushes, which were harder to learn to play, but would be needed for jazz ‘when I became a club musician.’”

Fortunately, Judy’s mother believed that a musician could always find enough work to keep food in his mouth, and both of his parents encouraged him and his younger brother, Mike, to pursue their love of music. Growing up in Mansfield, Ohio, Pat began playing drums in the school band and orchestra when he was 10 and continued through high school.

“The band teacher, Percy Hall, was my mentor and role model,” Judy said. “While I was still in school, he started taking me with his seven-piece band to play at clubs on weekends. Along with jazz, requests ranged from sambas and mambos to easy-to-dance-to numbers we called ‘businessmen’s bounce.’ I could read all the percussion charts and lead charts [chords and melody], and even if I didn’t know a song, I just always had a feel for it.”

Even before Judy reached high school, he had already been a professional musician for a few years. His mother was the director of nursing at a tuberculosis sanitarium, and Judy thinks he was about 12 when two men who worked for her appeared at the family’s front door one night with an urgent request.

“They said they wanted to borrow me for a little while,” he recalled. “There was a dance at the Leiderkranz, a German cultural organization, and the drummer had shown up too drunk to play. I was thrilled! For more than two hours, I played polkas, waltzes and schottisches. I got my first beer buzz, and I became a professional musician because I earned $17.50 (then union scale). And right after that, I got my first drum set.”

Judy formed his first band, Revolution, when he was a sophomore. His brother, Mike, also had a band and invited Pat to sit in when they participated in a Battle of the Bands at a local junior high.

“It was the first time I’d sung in public,” Judy said. “We alternated with the other band, playing five songs each for three sets. We blew them away!” (Mike, by the way, is not only a Door County musician who performs with his wife, April Pate, as Spike and April, but he is also a nationally known pastel artist.)

After high school, Pat enlisted in the Air Force National Guard and was sent to Lowry Air Force Base in Denver for tech school, which turned out to be the drum and bugle corps.

“Because they had too many drummers, the director asked if I could play any other instrument,” Judy said. “I told him that I’d also played the baritone in high school, and after one lesson, I ended up as a baritone bugle player. We traveled all over, including six or seven trips to Washington, D.C., to play at special events for Vice President Agnew.”

Back in Mansfield, Judy auditioned with the Keith McAllister and Kenny Markley band, Mark III.

“We went through 67 tunes that night,” Judy said, “and they asked me to sing ‘Hold On, I’m Coming,’ a song I’d heard, but never sung.” Through the years, it became an audience favorite.

“I first played with Keith and Kenny on June 23, 1967,” Judy recalled, “and stayed with Mark III for nearly 10 years in three different locations. I also played in pit bands in the area for headliners like Bobby Vinton, Mitzi Gaynor, Bill Cosby and The Lettermen.

“In 1977, I went on the road with Frank Theis and Mike Cosentino’s bands, Smile and Quest, and traveled all over the country with them for nine years. In 1982, at a gig at a Holiday Inn in Indianapolis, I met Susie Bergwall, a legal secretary.

“I actually asked her friend out for a steak dinner after the show, but she turned me down. Susie came back the next night and said a girl was crazy to refuse a good meal. For several years, she drove every Friday from Indianapolis to wherever we were playing that weekend, and we were married in 1985.”

Sowinski offered Judy a job, and he and Susie became Door County residents in 1987. He played with that group for two years, including many sunset cruises.

“Returning from a cruise one evening, we passed a fishing charter where two very tall guys were holding up strings of fish they’d caught,” Judy said. “We found out later it was Kareem Abdul-Jabbar and Magic Johnson.” During this time, he also played in the pit bands at Peninsula Players Theatre and American Folklore Theatre (now Northern Sky Theater).

The Off-Center Jazz Band soon turned into the Amnesians, and Judy continued to play with Sowinski, Jay Whitney and Johnny Redmann until 1998, when Susie was diagnosed with cancer, and she and Judy moved to Florida so that she could spend her last years near her parents. After her death in 2000, Judy returned to Door County.

“I’d been working for an auto dealership in Florida,” he recalled, “and I bet my boss that if I got back home on a Thursday, I’d have a job playing by Saturday. He laughed and bet me $100 that wouldn’t happen.

“I actually got back on a Wednesday; the phone was hooked up at 1 pm Thursday; and at 7 pm, I got a call from Bruce Koenig with the band The Groove King and His Court, wanting me to play Saturday night at Heroes, a club in Green Bay. I got the manager at Heroes to call my former boss in Florida to verify my employment, and a $100 bill soon arrived in the mail.”

A one-night gig at a 2001 St. Patrick’s Day party at the Nautical Inn in Sturgeon Bay united Sowinski, Judy and Whitney with Woody Mankowski, leading to the birth of the Original Big Mouth Quartet – one of the most popular and enduring musical groups in Door County and beyond for the next 14 years.

They played what they assumed was a final concert with Mankowski at The Garage at Husby’s on Aug. 19, 2015, before his move to California, but Mankowski returns to play every July Fourth and for occasional festivals.

Sadly, there will be no return engagements following Judy’s last performance with Sowinski and Whitney – by then the Big Mouth Trio – at the 2019 Fall Festival in Sister Bay, when a combination of Parkinson’s and arthritis ended Judy’s 53-year professional career.

Since June 2020, he’s been a resident of the skilled nursing facility at Door County Medical Center. Fewer than four months later, isolated in his room for weeks, Judy and guitarist George Sawyn separately recorded music that was merged into several videos that are now posted on Sawyn’s Facebook page.

Three days after the last video was placed on Facebook, Judy became ill and nearly lost his life to COVID-19. After a long recovery, however, he’s looking forward to doing more videos with Sawyn and Sowinski.

Judy turned 72 on Aug. 19. Although he has mobility issues, the memories of his many decades as a professional musician are as sharp as ever.

“The beauty of music,” he said recently, “is that it transcends a lot of generations and brings out the best in everybody. I can’t say enough about how much I enjoyed entertaining people. It’s gotten me through some pretty rocky times. I liked to look up from my drums and see smiling faces. And of all the bands I played with, Big Mouth was the most fun.”